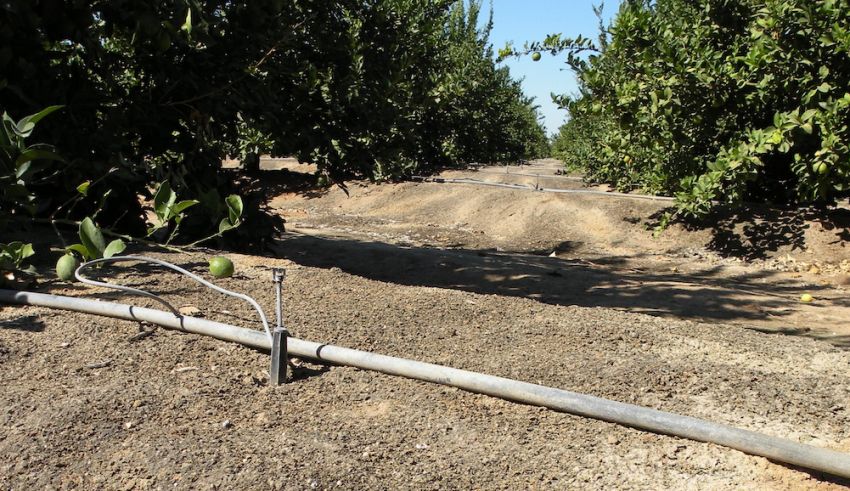 To maximize profits in the early navel orange market, growers need to have large fruit size and sufficient yellow-orange color and a high enough sugar-acid ratio to meet or exceed the legal minimum harvesting standards. Growers of early-maturing navel oranges in Kern County use different strategies to produce these oranges. Some growers irrigate at full evapotranspiration rates nearly up to harvest with the belief this will maximize fruit size, while others begin deficit irrigating a month or two prior to harvest to maximize development of sugar and color to promote earlier maturity. Little information exists in the literature to assist growers in making decisions related to producing early maturing navels such as Beck, Fukumoto and Thompson Improved. To determine the effects of late season irrigation stress, I, along with two University of California co-researchers Blake Sanden and Dr. Mary Lu Arpaia, participated in an experiment to elucidate some of the trade-offs that relate to irrigation strategies and early navel fruit production. The research was conducted from 2006 through 2008 in a cooperating grower’s Beck orchard at the extreme southern end of the San Joaquin Valley. Our generous and patient cooperating growers were George and Colby Fry.

Three different irrigation treatments, defined as low, mid and high, were developed based on the relative amounts of irrigation water applied to the test plots. Each plot consisted of 10 trees in a central row, bordered by ten similarly irrigated trees in the two adjacent rows. Each treatment was replicated five times. The same irrigation treatment was applied to the same plots for the first two years, while in the third year the low treatment was changed to the high treatment to provide information on how rapidly the trees would recover from stress. The different irrigation treatments were administered by using irrigation emitters with different flow rates and by differentially shutting off water to some treatments as needed to achieve desired stress levels. Between growing seasons, the top three feet of soil profile was refilled with water during the winter and differential irrigation began in early August. Measurable differences in tree shaded stem water potential among treatment usually were noted by early September. In the second year of the experiment (2007), the low and mid-irrigation treatments applied approximately 38 and 71 percent, respectively on average, of the water of the high treatment. Water potential measurements made mid-day on shaded, interior leaves demonstrated that good separation was achieved among the three differential treatments. In 2007, for example, shaded stem water potential measurement in early September were about -9, -12, and -18 bars for the high, mid and low irrigation treatments, respectively and at harvest in mid-October were -12, -18, -24, respectively. Neutron probe measurements also demonstrated that trees differentially depleted available water stored in the soil as the season progressed (data not shown). In 2007, differences in applied water among the treatments were large. Including the increased quantity of water applied to refill the soil profile in the winter, 3.55, 2.58 and 2.11 acre feet of water on a per acre basis, were applied to the high, mid and low irrigation treatments respectively, from October 30, 2006, to harvest, October 15, 2007. Rainfall was minimal.

Again, using 2007 as an example, as the level of applied water decreased, soluble solids (i.e. sugars) and titratable acid, were greater at harvest, although the sugar acid ratio was not different (see Table 1).

In 2007, yield and grade decreased as the amount of applied water decreased (see Table 2). 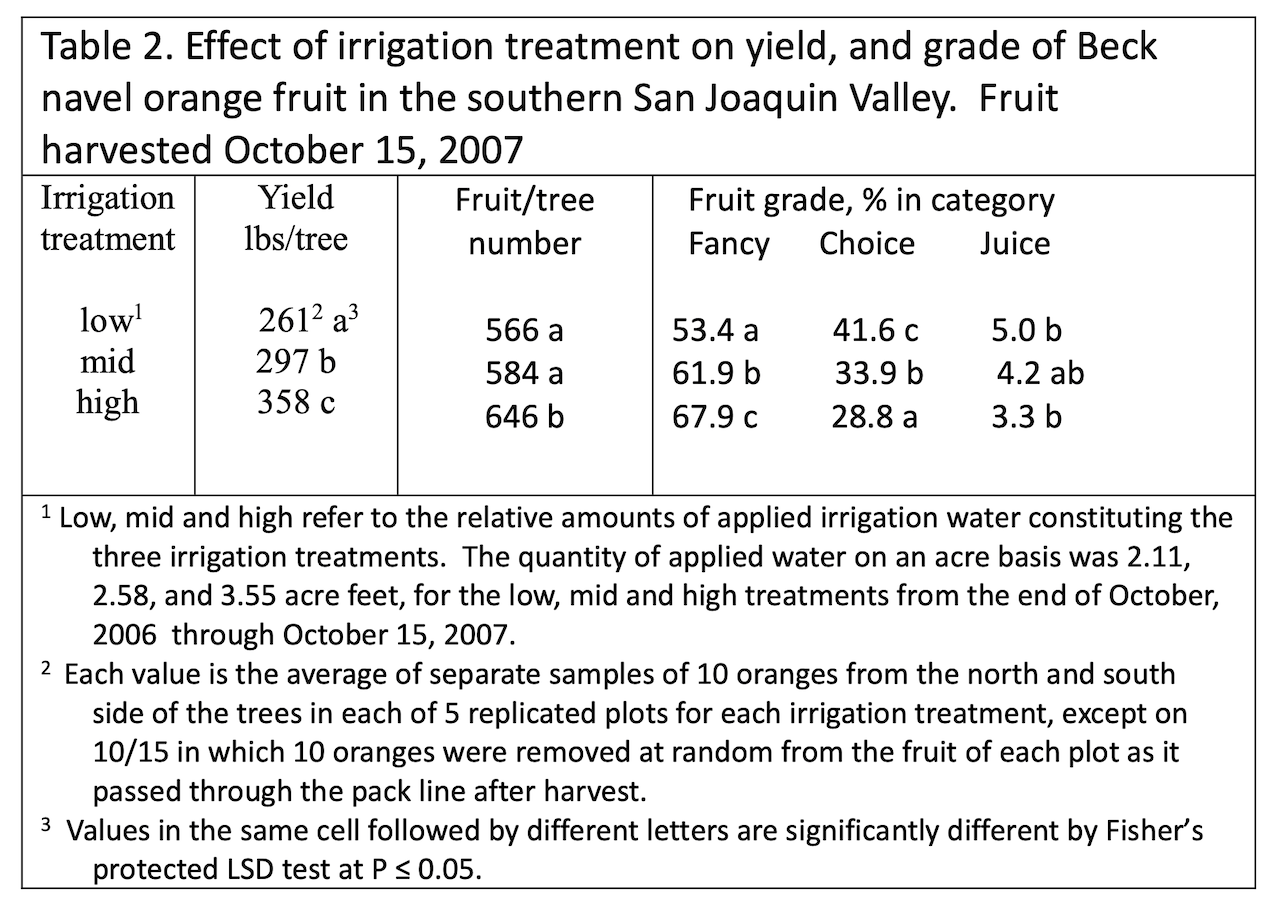 Fruit in the high and mid irrigation treatments peaked on size 56 per carton and on size 72 per carton in low treatment (data not shown). The decrease in fruit grade at pack-out appeared to be largely due to a more oblong shape. The negative yield, fruit size and grade effects measured in the low and mid treatments in 2007 were probably the cumulative result of deficit irrigation in Years 1 and 2 and not just Year 2 alone. Reduced rates of irrigation hastened development of fruit color compared to the high irrigation treatment (see Table 3) and this occurred every year. 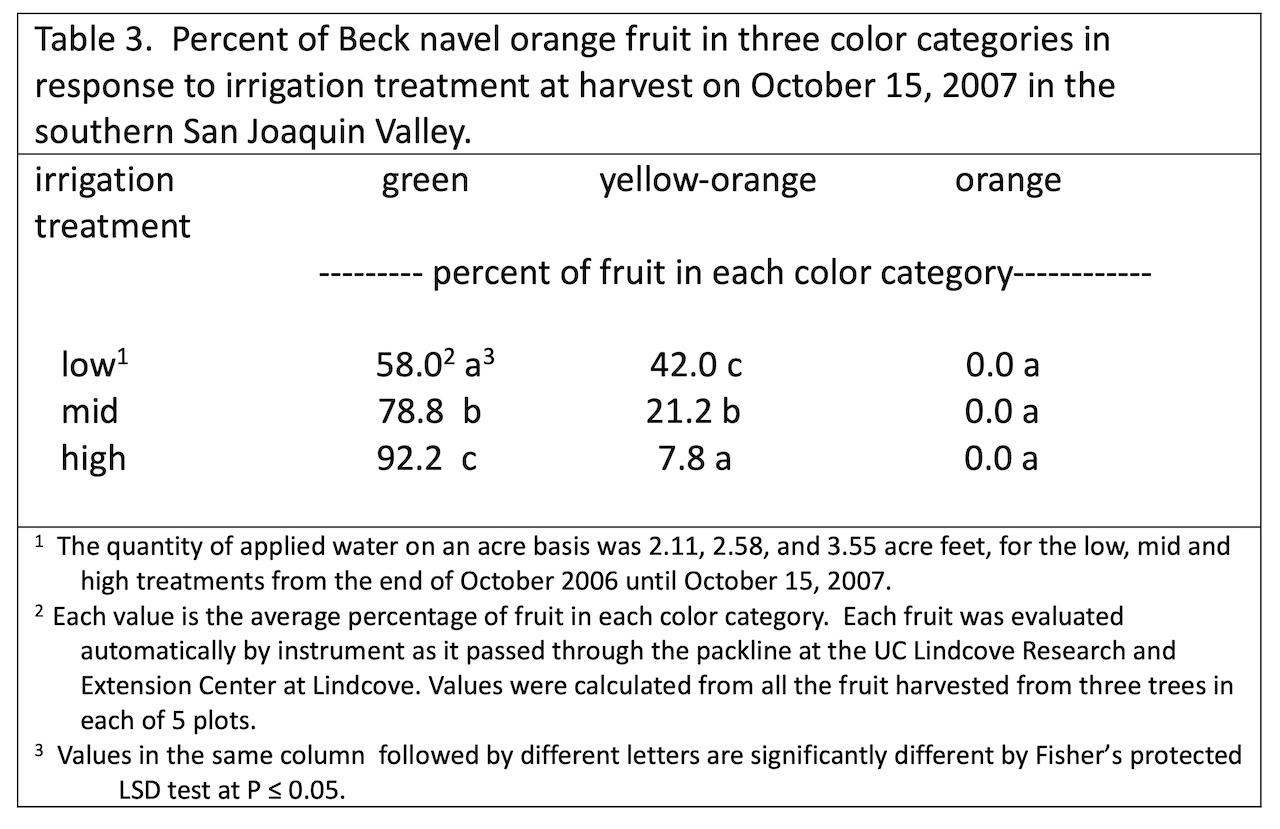 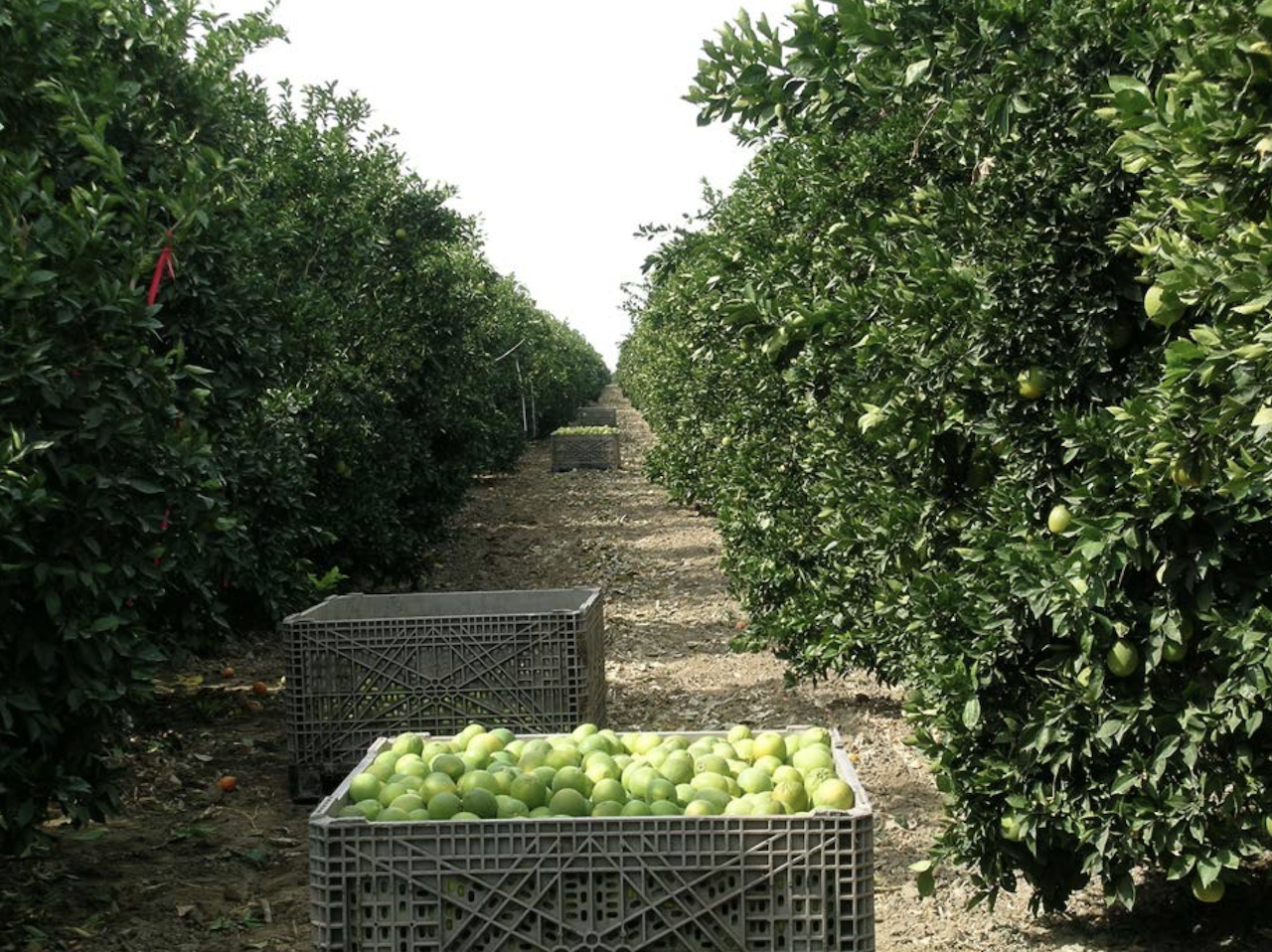 This study provides information on some of the trade-offs that might be expected among fruit yield, size, grade, sugar and color in relation to reduced irrigation as harvest approaches. More detailed information from the trial can be found at the following link: https://doi.org/10.21273/HORTSCI.46.8.1163. How growers respond to this information will depend on their approach to profiting in the early navel market and how much water will be available for irrigation. If reducing water use is the primary goal of the grower, while minimizing effects on yield and fruit quality compared to fully irrigated orchards, work by Dr. Goldhamer, UC irrigation specialist, demonstrated that regulated deficit irrigation in the mid-May through mid-July time period would be the best strategy. The authors gratefully acknowledge the Citrus Research Board for its financial support of this project. — By Craig Kallsen, UC Cooperative Extension Farm Advisor, Subtropical Horticulture & Pistachio, Kern County