Thursday , 26 January 2023
Home News Be on Lookout for Migratory Monarchs 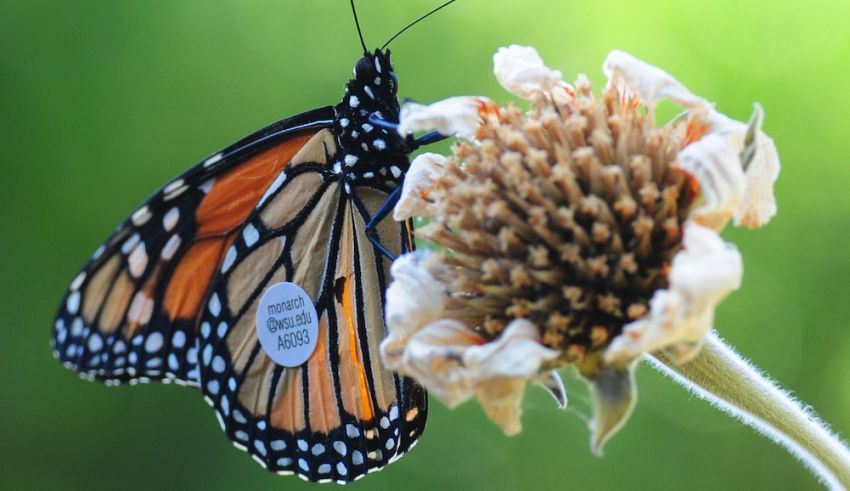 They’re here and more are coming!

Be on the lookout for migratory Monarch butterflies from the Pacific Northwest heading south to their overwintering sites along the California coast.

It’s been a very good year for Monarchs in the Pacific Northwest (PNW), according to noted entomologist and Monarch researcher David James, an associate professor at Washington State University (WSU), Pullman.

“The numbers we are seeing in the PNW this summer are consistent with numbers I’ve seen in summers past when the overwintering population was approximately 250,000 as it was last winter,” he wrote in an email Aug. 31.

“I have been compiling all the PNW monarch reports I have come across this summer–as I have done for many summers in the past. These have been from iNaturalist, Journey North, various Monarch Facebook pages and personal communications I get many people telling me they’ve seen a monarch.  I verify all reports, that is, they must have a photo, or I know the reporter is experienced.”

“Last summer (2021) I verified approximately 60 Monarch sightings in the PNW. This summer, I have had approximately 500 verified reports. “So, I think we have seen an 8-10 fold increase in Monarch numbers this summer in the PNW.  The majority have been in Oregon, followed by Idaho, Washington and British Columbia. There are also positive reports of good numbers of Monarchs in Utah, Nevada and eastern California.”

“So the signs are there for a good migration back to California this fall,” James said.  “The big question will be whether the migrants proceed normally to the overwintering sites or whether they do what they did in 2020, establish winter breeding populations in slightly inland places like San Francisco and Los Angeles.  The determining factor will be the temperatures California experiences over the next six weeks.  If average temperatures prevail, then the butterflies will go to the coastal overwintering sites and we will have–I think–spectacular numbers again…at least as high as last year and possibly much higher.”

“If September/October temperatures are way above average, then most of the population will become reproductive in the gardens and parks of LA and SF and in between. And people will think the population has crashed! (judging from overwintering site numbers).”

To track migratory Monarchs, citizen scientists in the David James’ research program affix a tag on the discal cell (underside of the hind wing). The tag does not interfere with its flight.

This year James handed out 2000 tags to citizen scientists in southern Oregon.

One of his citizen scientists, Steve Anderson of Ashland, Ore., tagged a male Monarch on Aug. 28, 2016 that stopped for nectar in our Vacaville pollinator garden on Sept. 5, 2016.  The tag read  “Monarch@wsu.edu A6093.”  It hung around for five hours.

“So, assuming it didn’t travel much on the day you saw it, it flew 285 miles in 7 days or about 40.7 miles per day,” James told us back in 2016. “Pretty amazing. So, I doubt he broke his journey for much more than the five hours you watched him–he could be 100 miles further south by now.”

This year, to date, we have not seen a single Monarch in our pollinator garden. James estimates we will start seeing the first ones within the next few weeks. “Johnson has already had one of his tagged monarchs recovered, admittedly only a few miles away but it was heading south!”

Butterfly guru Art Shapiro, UC Davis distinguished professor of evolution and ecology, spotted four within half an hour in the UC Davis Arboretum and Public Garden on Aug. 26. One was a tattered male.

What to do if you see a WSU-tagged Monarch? Photograph it, if you can, and contact David James at david_james@wsu.edu or the PNW Facebook page, “Monarch Butterflies in the Pacific Northwest.”

Meanwhile, Monarch scientists, citizen scientists and Monarch enthusiasts are looking forward to the 2023 International Western Monarch Summit, set Friday through Sunday, Jan. 20-22 at Pismo Beach, San Luis Obispo. Registration is now underway. It’s sponsored by Western Monarch Advocates (WMA), which relates its mission is “to serve as an overarching entity to encourage and facilitate communication and interaction of groups and individuals committed to restoring the western monarch butterfly population-regardless of their affiliation or location–in the hope that the shared knowledge will empower each of them to improve and better achieve restoration goals within their own respective affiliation or location.”

The International Union for the Conservation of Nature (IUCN) placed the migratory monarch butterfly on its Red List of threatened species on July 21, 2022, classifying it as endangered.

“In the 1990s, nearly 700 million monarchs made the epic flight each fall from the northern plains of the U.S. and Canada to sites in the oyamel fir forests north of Mexico City, and more than one million monarchs overwintered in forested groves on the California Coast,” according to the Xerces Society for Invertebrate Conservation. “Now, researchers and citizen scientists estimate that only a fraction of the population remains, monarchs have declined by more than 80% since the 1990s from central Mexico, and by more than 99% since the 1980s in coastal California.”