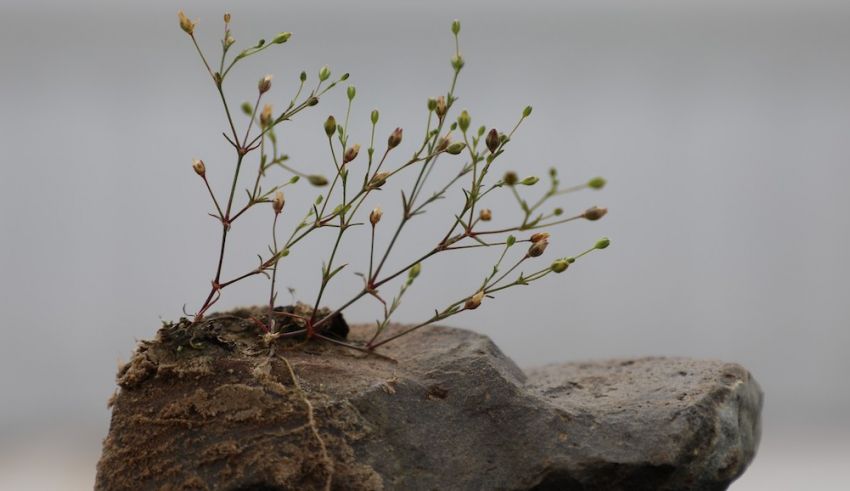 Many types of plants have adapted to grow on rocks or new soil. Even newer soils like Entisols and Inceptisols have micronutrients that aid in plant growth. Credit: Madhav Dhakal

In order to grow well, plants need a place to grow, access to nutrients, and in most cases sunlight. A rich soil provides that home and a good supply of nutrients. But young soils have less to offer – yes, soils can have different ages ranging from hundreds, to thousands, to millions of years old. The Soil Science Society of America’s (SSSA) August 15th Soils Matter blog explores how young soils can support plant life.

According to soil scientist and blogger Madhav Dhakal, soil is being made and lost all the time, with various dynamic processes.

The process of soil formation is often given the acronym ClORPT for: climate, organisms, relief, parent material and time. Soils in warmer climates tend to be older than ones in colder climates. Many organisms, like microbes or insects, help aid soil formation. The term “relief” refers to the topography area. So, usually soil at the bottom of a mountain range – exposed to less erosion and warmer weather, will be older than soil at the top of a mountain.

The major parent material for soils are rocks. Soil formation takes place after a gradual exposure of rocks to the elements and activity of organism – called weathering.

One important thing to consider during this whole transformation is time. Time is relatively long for the formation of soil. It happens over geologic time – or millions of years. Over these long periods, landscapes and soils are continuously transforming from one form to another. With time, soil forms different horizons or layers, parallel to the earth’s surface.

However, soils of recent origin may not contain a distinct horizons or formations. For example, Entisol and Inceptisol are among the 12 soil orders in the U.S. Soil Taxonomy that contain no or very weak horizons or layers of soil.

In addition to the variety and ages of soils as a home for plants, plants themselves have different types of adaptability. For millions of years, the plant kingdom endured several catastrophic events, geological changes, and climatic extremes. Plants were able to adopt to incredibly different types of surfaces or soil, where the soil itself is highly dynamic and changeable.

The versatility of plant species may have allowed them to survive in extreme conditions such as hostile climate, rocky, acidic, and salty surfaces.

There are nearly 435,000 unique land-dwelling species of plants in the world. Some of them grow with very little ingredients or even without sufficient water. For example, some cactus species thrive in the desert. Similarly, lithophytes can grow either on the surface of rocks or in crevices.

What is it about some plants that allows them to grow in unfavorable conditions? There are a few things. Rock felt ferns, orchids, and liverworts can grow on a rocky substrate, with different tactics or physiological adaptation. They are even capable of feeding off the nutrients from rainwater and nearby decomposed plants, including their own dead cells.

Lithophytes are a type of plant that grows well on rock surfaces. For most of the lithophytes, the nutrient nitrogen is available from the atmosphere in the form of ammonia. Lithophytes have a smaller number of root hairs and larger root diameters compared to common plant species. This makes them able to efficiently absorb nutrients.

Other plants have developed cooperative relationships with soil microbes, which may help them survive in younger soils. Cacti can metabolize a type of acid that helps them with photosynthesis. Plants like peas are legumes – and can work with a bacterium in the category of Rhizobium, and this helps them acquire nitrogen.

Newly formed soils, such as Entisols and Inceptisols can support plant that have these built-in strategies to supplement their essential nutrients. Depending on the parent material, these soils can provide mineral nutrients such as nitrogen, phosphorus, potassium, as well as micronutrients like calcium, iron, zinc, boron, etc.

Indeed, as adaptable plants colonize these soils, they also start to help build more soil, in conjunction with microbial and insect activity. Their dead roots and waste products become organic matter, building up the soil bit by bit. One example of how plants can improve soils is the plant lupine (Lupinus Lepidus). Lupine’s metabolites can neutralize acids produced by volcanic emanations. This makes the soil more habitable by other types of plants that cannot survive in acidic soils. There are hundreds of plant species that can survive on and improve young soils over time.

The Soil Science Society of America (SSSA) is a progressive international scientific society that fosters the transfer of knowledge and practices to sustain global soils. Based in Madison, WI, and founded in 1936, SSSA is the professional home for 6,000+ members and 1,000+ certified professionals dedicated to advancing the field of soil science. The Society provides information about soils in relation to crop production, environmental quality, ecosystem sustainability, bioremediation, waste management, recycling, and wise land use.