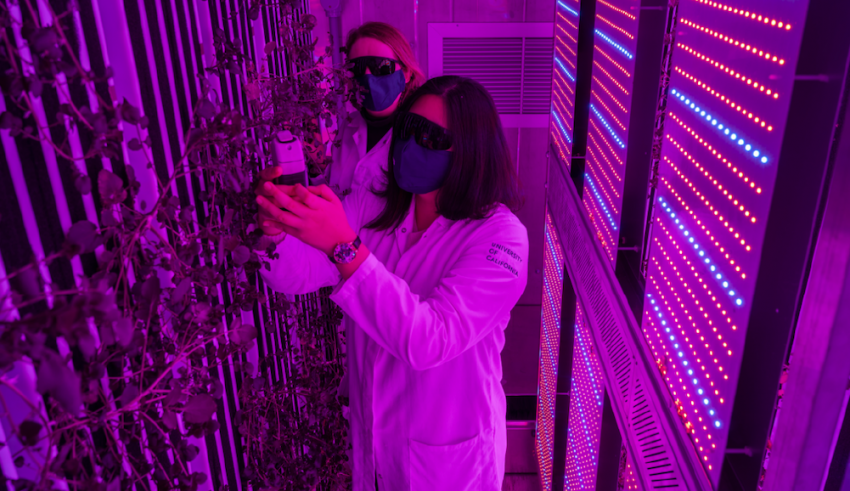 How does it sound to grow plants without sunlight or soil, in racks going up and down instead of in rows on the ground? That’s how crops grow in indoor vertical farms, where nutrient-rich, recycled water feeds plants under red and blue LED lights. This innovative approach gives farmers the chance to alter crops as they like, whether that means making lettuce red or producing extra-flavorful herbs. The added benefits: Amid continuing drought across the western United States and water scarcity in many other parts of the world, this system uses up to 95% less water than traditional farming. And, it has no need for pesticides.

Watercress is an ideal crop for vertical farming. Traditionally, this semi-aquatic, leafy green from the nasturtium family grows in high-quality chalk streams in Europe. It’s also packed with nutrients, with a distinctive peppery taste that makes it a yummy addition to salads. The flavor hints at anti-cancer benefits conferred by the same natural chemical compound that creates watercress’s flavor

Now, scientists from the UC Davis Department of Plant Sciences have discovered that watercress grown in indoor, vertical farms has the highest phytonutrient content and yield, compared to cress grown in soil in California and in traditional, outdoor farms in the United Kingdom, according to a study just published in Scientia Horticulturae. Levels of the plant’s anti-cancer compound also were further elevated by increased blue light when grown indoors. This discovery shows how the quality of food can be improved for people’s health when crops are grown indoors.

This work has been made possible with a new, specialized growing facility on campus for research in controlled environment agriculture. Multiple faculty members in the College of Agricultural and Environmental Sciences are working in this area. The indoor farm also is being used to train the next generation of high-tech farmers, with students visiting the facility and growing red romaine lettuce this year. — By Yufei Qian & Lauren Hibbert, UC Davis