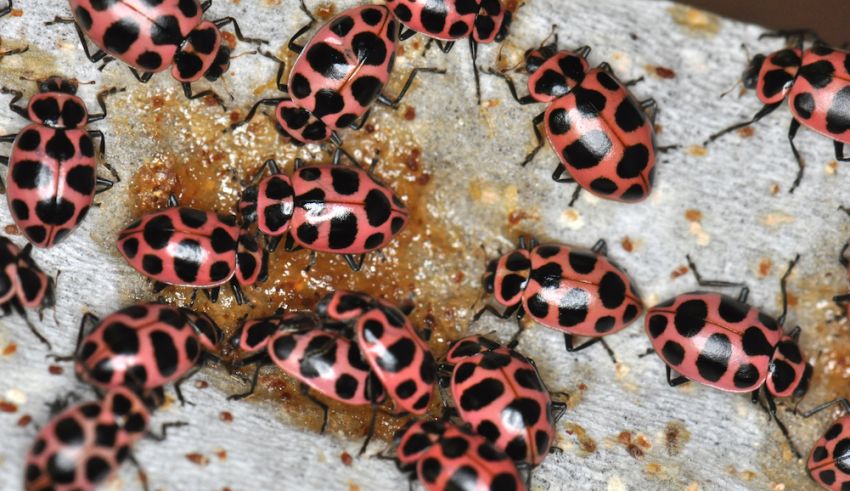 Scientists with the Agricultural Research Service (ARS) are looking for the perfect diet. Not just any diet, but one that’s special; a diet that encourages bugs to thrive.

Most people have an aversion to bugs, so what Guadalupe Rojas and Juan A. Morales-Ramos are trying to do may seem a bit odd to some. But Rojas and Morales-Ramos, research entomologists at the ARS Biological Control of Pests Research Unit in Stoneville, MS, are actually attempting to pit insects against each other – to fight fire with fire, so to speak.

“The pink spotted lady beetle, Coleomegilla maculate, is a predator of important pests such as the two-spotted spider mite, Tetranychus urticae, and several aphid species that attack crops and cause great economical loss,” she said.

(Most people are familiar with the term “ladybug,” but lady beetle is more accurate. Technically, ladybugs are beetles rather than true bugs, which fall under the scientific order Hemiptera.)

If left unchecked, Rojas said, the “bad bug” population can explode. That situation is rare in nature because of the presence of natural predators, but predators sometimes cannot keep up with their prey in large fields or greenhouses because of the abundance of food provided by crops. This situation can lead to major economic losses to farmers and less produce for consumers.

“IPM uses multiple tactics to control an agricultural pest in an integrated manner, including chemical, biological, microbial, and environmental modification,” Rojas said. “Not all the tactics are compatible to use simultaneously, but they can be timed to prevent interference. The use of lady beetles follows on biological control tactics.”

However, actual application is not so easy. While adult pink spotted lady beetles can live up to 8 months, it takes them a while to grow from larvae to maturity. Trying to feed the young lady beetles their natural diet would require greenhouses full of plants to raise spider mites and aphids, and that could lead to major expenses or other unwelcome complications. An artificial diet of proteins, carbohydrates, fats, vitamins, and mineral salts would eliminate those needs and risks.

Creating that diet, however, is easier said than done.

“It’s easy to create a formula that will keep beetles alive, but it may fail to get them to develop completely and later to reproduce,” Rojas said. “It’s a lengthy process of experimentation and evaluation to develop a diet that will be adequate for growth and reproduction.”

To further complicate matters, even if the scientists find initial success, a formula may not be effective in the long run.

“Feeding any animal with a single food formulation requires full knowledge of its nutritional needs,” Rojas said. “In most cases, the first version will lack a few nutrients and the colony will fail and we’ll need to revise the formulation. In other words, refining the diet is never completely done; it will be continuously improved to maintain the colony indefinitely.”

The next challenge for Rojas and her colleagues is to reduce the number of ingredients or substitute them with byproducts to reduce production costs, so anybody could make it since ingredients used are from ordinary food products.

“If lady beetles can be produced cheaply and in abundance, then they would be available for homeowners to purchase. And, biological control is more sustainable than using pesticides because using lady beetles reduces the reliance on chemical pesticides,” Morales-Ramos said.

“Lady beetles are cool,” Rojas said. “What can be cooler than growing your own lady beetles at home?” — By Scott Elliott, USDA-ARS Office of Communications.