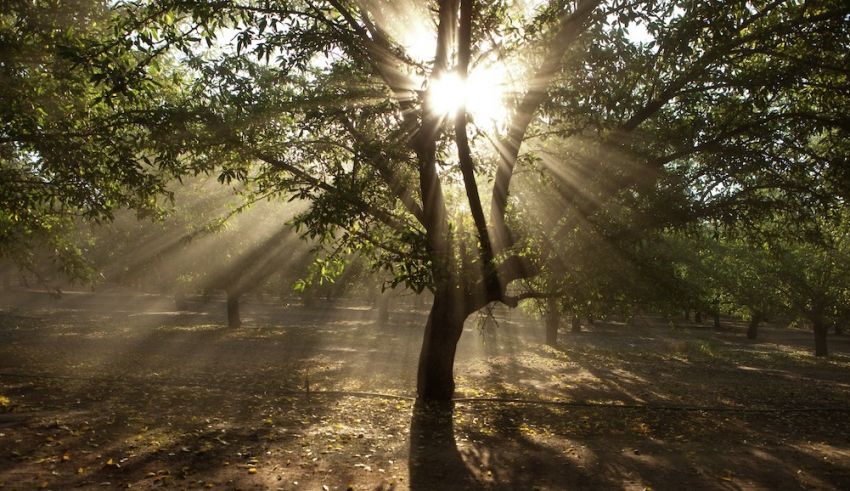 Almond Board of California — California’s almond acreage continues to grow, but at a gradually slowing rate, according to two new reports. While the number of almond orchards removed also increased over the previous year, it was not enough to offset the overall acreage gains.

According to an estimate from Land IQ, bearing almond orchards at harvest will cover 1.338 million acres across California, an increase of 29,000 acres – or about 2.2% – over last year. This estimate looks at orchards that will be productive and harvested in 2022. In addition, the report estimates 59,732 acres of orchards will be removed before harvest, nearly 12,000 acres more than last year. 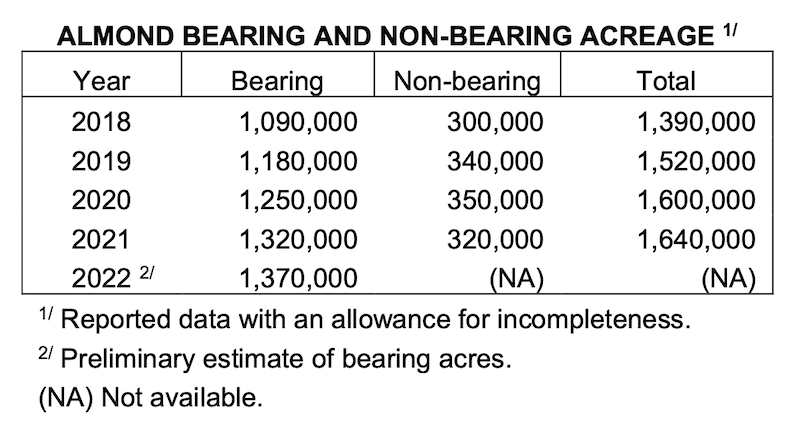 The USDA-NASS report gave a preliminary estimate for bearing acreage in 2022 at 1.37 million acres, but cautioned that a major source of data for this estimate is a survey mailed to growers and is unlikely to be 100 percent accurate.

USDA-NASS said nonpareil continued to be the leading variety, followed by Monterey, Butte, Carmel, and Independence.

These reports are being issued side by side by the Almond Board of California (ABC) to provide a complete picture of California’s almond acreage.

Neither of these reports offer any estimate on the actual almond yield this 2021-22 crop year. The first look at yield will come on May 12 with USDA-NASS’ Subjective Estimate. A fuller picture of crop size will come with USDA-NASS’ Objective Report in July.

Bearing acres reflect plantings from 2019 or earlier. The removal estimates cover orchards taken out beginning in 2021 through March 31, 2022, added to acreage projected to be removed through Aug. 31, the end of the crop year. The projection uses historical data and present conditions.

“These estimates show that California almond production will remain strong,” said ABC President and CEO Richard Waycott. “Demand for almonds in California, the U.S. and around the globe continues to grow and California almond growers are prepared to meet that demand.”

Land IQ’s Initial Estimate and its Final Acreage Estimate in November, along with USDA-NASS’s April Acreage Report, May’s Subjective Estimate and the Objective Report in July are all commissioned by ABC to provide statistical transparency and a robust picture of California almonds to industry stakeholders around the world.

In 2018, ABC first commissioned Land IQ, a Sacramento-based agricultural and environmental scientific research and consulting firm, to develop a comprehensive, living map of California almonds. The map is the result of nearly a decade of research and has an accuracy of 98% or greater.

Data for USDA-NASS’s acreage reports comes from a number of sources including voluntary responses from almond growers’ to mailed questionnaires with telephone and field follow-ups. USDA-NASS also uses Land IQ data to fine tune its reports. 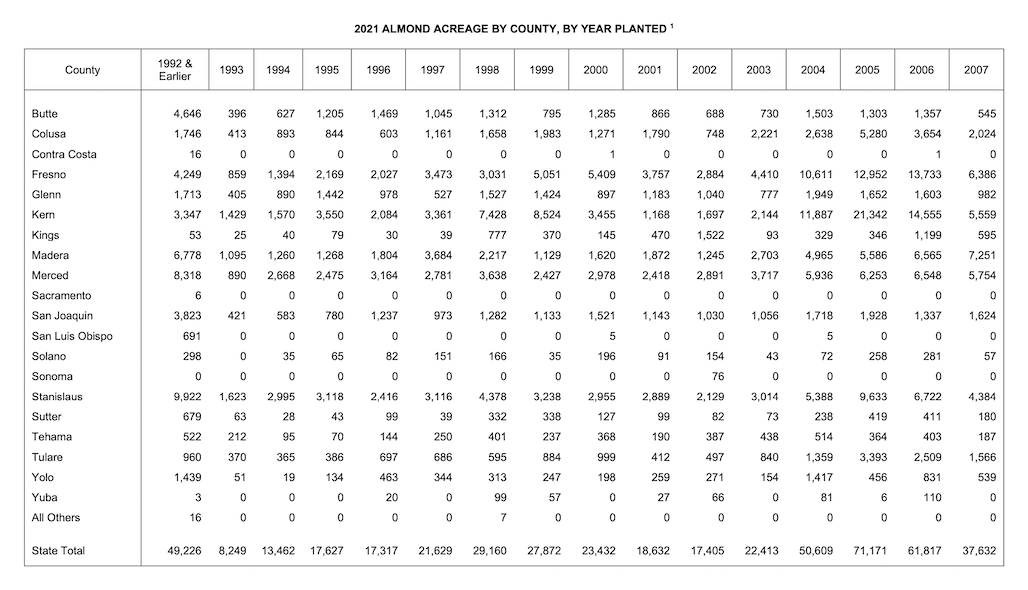