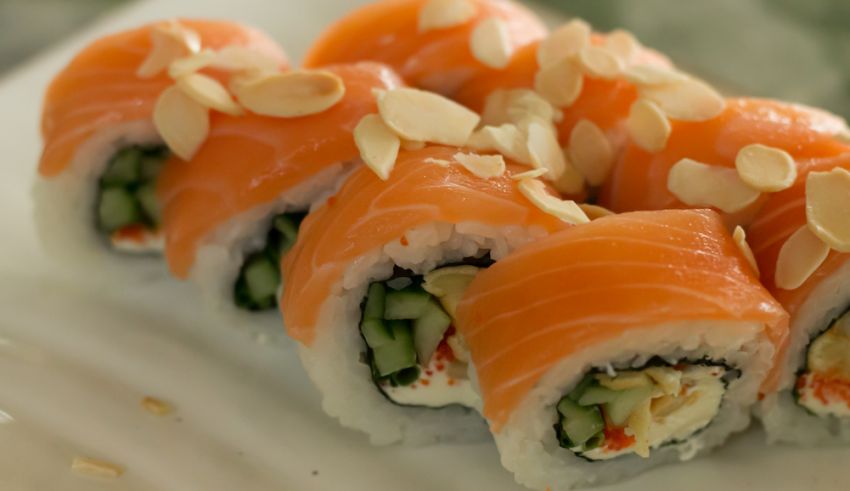 According to the USDA Foreign Agricultural Service, a strong demand for U.S. Tree Nut products continues in Japan, driven by the growing health-oriented trends among Japanese consumers. In 2021, fresh and dried nut imports to Japan totaled $491 million, of which 78.2 percent or approximately $384 million was from the United States. The key market sectors for U.S. Tree Nuts are in bakery and retail, valued at $215.1 million. Almonds and walnuts are almost exclusively supplied by the United States.

Historically, walnuts and chestnuts were grown wild or cultivated on a very small scale for local consumption. Since Japan started importing nuts in the 1950’s, nuts such as almonds and mixed nuts have been used as a snack to eat with alcoholic drinks or as ingredients for cookies and chocolates. Except for certain walnut production areas, only in recent years have nuts been used for cooking. The Japan Nuts Association was established in 1993, with seventy-three importers and distributors.

Japan has almost no production of nuts, except for very limited production of walnuts (approximately one hundred eighty tons per year). As a result, consumers of nut products rely heavily on imports. The market had been very limited, but stable, because nuts were mostly used as ingredients for the bakery and confectionary industry and the retail price for nuts was relatively higher. Over the past decade, consumption of almonds and walnuts has gradually increased, with imports reaching 42,489 metric tons (MT) (a record high) and 22,527 MT, respectively. Meanwhile, chestnuts have seen dramatic declines in import volumes over the past twenty years. Pistachio imports have been stable but has gradually increased in small amounts over the past couple of years. 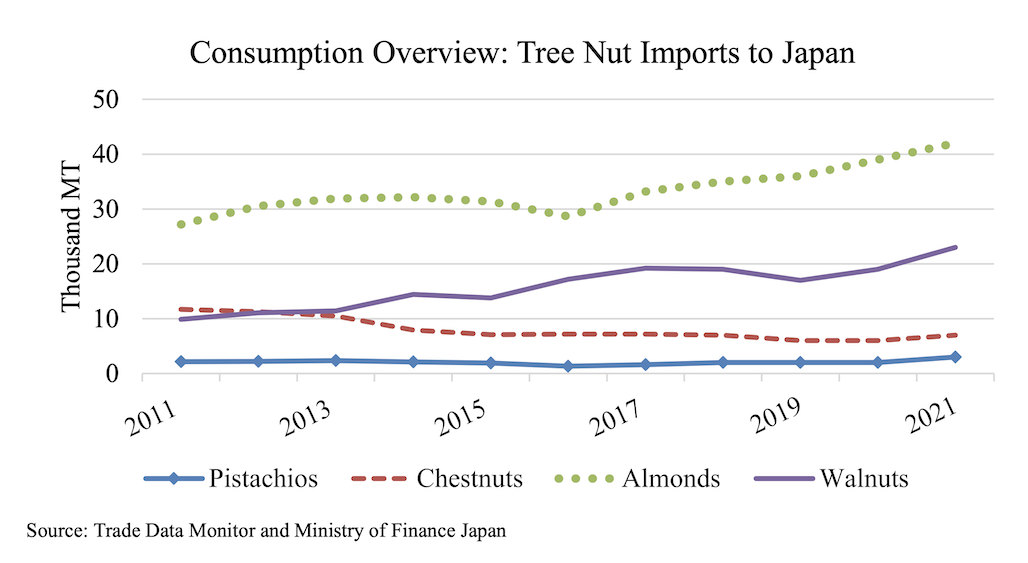 The key market sectors for tree nuts are bakery (55 percent) and retail (33 percent). For confectionary and baking industry, the following processed nut items have been most widely used:

In the baking sector, walnuts are the most frequently utilized tree nuts, in a variety of bread items and Japanese sweets. In the retail sector, nuts in a 40-55g package or 100g package are popular at convenience stores and supermarkets, and 200g or 500g package are popular at specialty stores, and internet shops. At the retail stores, nuts are placed on the shelf for the baking ingredients and/or the shelf for the snacks. Salted mixed nuts for snacking or accompanied with alcoholic drinks are traditional methods of consumption and still popular in the retail sector. However, unsalted straight nuts are gaining in popularity due to the proliferation of information on the health benefits and versatility in usage for each type of nut. Snack nuts mixed with dry fruits, such as trail mix, are still not common but cereal snack bars, some sold with the Nutritional Supplement Foods label, with nuts and dry fruits have been popular in the Japanese market.

In the retail sector, mixed nuts are sold best among nuts categories (including peanuts), followed by peanuts and chestnuts. In recent years, Japanese consumers have become more health-conscious and have become more educated on the nutritional benefits both almonds and walnuts provide. Strategic marketing and promotion of the health and beauty benefits have continued to be effective by major television stations as well as on internet and social media sites. Health-related messaging includes key words like omega-3, anti-oxydant, vitamin E, vitamin B, minerals, oleic acid, anti-aging, reducing cholesterol, zero cholesterol, healthy blood vessels, healthy brain, healthy skin, etc. This type of messaging has been key to promoting nuts and nut products to Japanese consumers.

During the peak of the COVID-19 pandemic in 2020-2021, sales of nuts and dry fruits increased in the retail sector due to consumer dining changes, from dining-out to dining in the household. Some stores reported between 120-130 percent increased sales and the expansion of shelf space by 10 percent. Overall, snacking became one of the growing trends during the stay-at-home/teleworking environment. “New Snacking” included nuts, dry fruits, and vegetable chips. In addition to this, consumers made shifts to “unsalted” nuts, as a healthier alternative.

Pistachio’s use as an ingredient is another in-demand product. Major snack/confectionary manufacturers created new snacks using more nuts including pistachios. Major manufacturers including Morinaga and Tirol have new ice cream and chocolate products utilizing pistachios. Major convenience stores such as 7-Eleven and Family Mart created desserts with pistachios, which have also been sold in cafes and at other specialty stores. In addition to this, one of the major specialty store chains KALDI started selling pistachio spread. A pistachio specialty store “Pista and Tokyo” recently opened at one of the premium locations near Tokyo Station, demonstrating the strong popularity pistachios have gained among Japanese consumers. Imports for U.S. pistachios have been flat but have been gradually increasing over time. Import data from December 2020 to November 2021, shows an increase of 146.3 percent compared to the previous year. Approximately 93 percent of total pistachio imports in 2020 were from the U.S., with the rest mostly originating from Iran and Italy.

Each type of nut is imported mainly from a sole exporter because of specific production conditions such as climate, soil, and ability for mass production and quality control. That dependence can cause unstable supplies and prices; and Japanese importers are seeking a wider variety of potential suppliers to fulfill market demand. The United States dominates as supplier of almonds, walnuts, and pistachios, and ships in lesser quantities. Australia supplies the majority of macadamia nuts; chestnuts are imported primarily from China and Korea, while Turkey is the largest supplier of hazelnuts. Cashews and coconuts are sourced mostly from other countries.

The U.S.-Japan Trade Agreement (USJTA) entered into force on January 1, 2020 and is in year three of enforcement. Following implementation of USJTA, nearly 90 percent of U.S. food and agricultural products imported into Japan are now duty free or receive preferential tariff access. In 2021, Japan imported $491 million in fresh or dried nuts from the world, of which 78.2 percent (approximately $384 million) was from the United States. 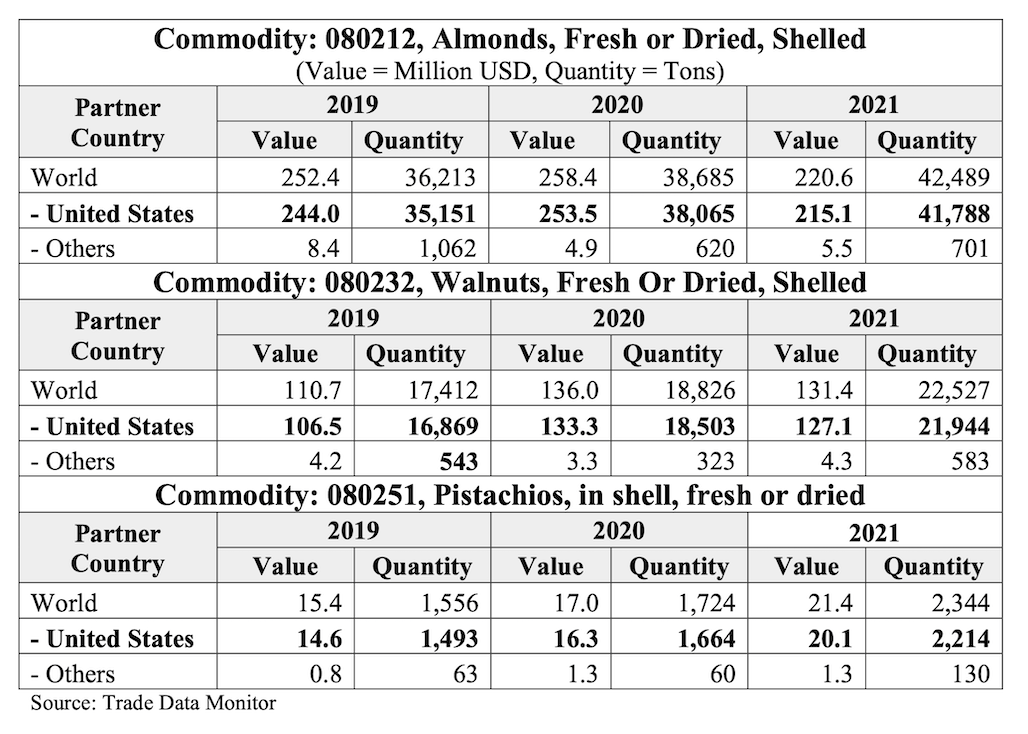 Japan is a very competitive market, and buyers in the food and beverage industry are inundated with meeting requests. Therefore, they often do not respond to “cold calls” or requests for meetings with individual companies. Instead, they prefer to find new products at large trade shows, or specially targeted trade showcases, where they can look at many products at once. Therefore, the best way to find buyers is to participate in one of the food related trade shows or showcases in Japan. The ATO organizes U.S. pavilions at the Supermarket Trade Show in February and FOODEX Japan in March, and many Japanese buyers are invited to stop by the U.S. pavilion to meet with exhibitors. The ATO also supports exhibitors at the shows by providing a market briefing, business meeting lounge, etc. Please contact the ATOs for more information about trade shows. The recommended trade shows featuring USA Pavilions in Japan are as follows:

The Japan Nuts Association represents the interests of wholesalers, processors, and trading firms. For their member list, please visit: http://www.jna-nut.org/?page_id=16