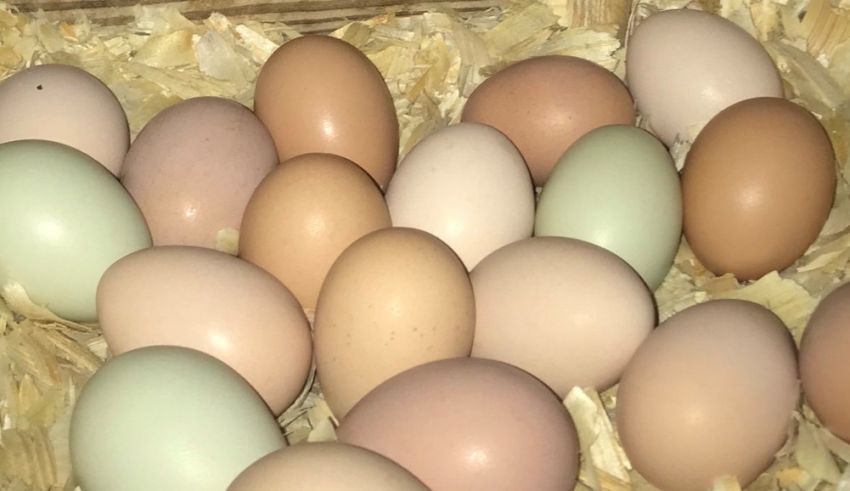 A display of some of the different colored eggs hens may lay. (Texas A&M AgriLife photo by Susan Himes)

Have you ever been curious about why chicken eggs can be different colors? While most eggs are white or brown, they also come in colors like cream, pink, blue and green. In addition — and this is no “yolk” — some are even speckled.

Nature has provided chickens with diverse color patterns for their feathers, skin patches and eggshells for various purposes, including camouflage, protection from predators and to signal individual identity.

According to a Texas A&M AgriLife Extension Service poultry specialist, the color of an egg is mainly determined by the chicken’s genetics. That means the breed of hen will usually indicate what color of egg will be produced.

But appearances aside, all chicken eggs have no major differences in taste or nutritional composition.

You’ve got to hear this … a good way to guess what color eggs a chicken will lay is to take a gander at the hen’s ear lobes.

“Generally, hens with white earlobes will produce white eggs,” said Gregory Archer, Ph.D.,AgriLife Extension specialist in the Department of Poultry Science, Bryan-College Station. “But all eggs start out white because the shells are made from calcium carbonate. They get their color from the hen’s genetics as the egg forms.”

Archer said, more often than not, chickens with lighter earlobes also have white feathers and produce white eggs. Those with colored feathers and darker earlobes will likely produce colored eggs.

Nature has its own way of coloring eggs, and it doesn’t require boiling water, food coloring or paintbrushes. Let’s eggs-plore how this happens. Different eggshell colors come from pigments deposited onto the shell as the egg forms in the hen’s oviduct. The oviduct is a tube-like organ found along the hen’s backbone between the ovary and the tail.

A chicken yolk, or ovum, forms in the hen’s ovaries. A fully formed ovum leaves the ovary and makes its way into the oviduct. There, it goes through a five-stage process to help ensure the yolk makes it safely to the outside world. The entire egg-forming process usually takes a little more than 24 hours.

It’s during the fourth stage of this process involving the shell gland that pigments are deposited onto the shell, producing its color. So, in short, different breeds of chicken deposit different pigments on the shell as it forms, changing its exterior — and sometimes its interior — shell color.

A pigment of your imagination

White Leghorn chickens lay white-shelled eggs and breeds like Plymouth Rocks and Rhode Island reds lay brown-shelled eggs. The shells are brown because a pigment known as protoporphyrin is deposited onto the shell. But because this happens late in the process of shell formation, the pigment doesn’t penetrate the shell’s interior.

“This is why when you crack open a brown egg, you will see the interior of most of the shells remains white,” Archer said.

A pigment called oocyanin is deposited on the egg of the Ameraucana breed, penetrating both the exterior and interior of the shell and making them blue. Other breeds such as Araucana, Dongxiang and Lushi lay blue or blue-green eggs.

An olive egger results from a cross between a hen and rooster from a brown-egg-laying and a blue-egg-laying breed. The hen produces a brown pigment that penetrates the blue shell of the egg, resulting in a greenish-hued egg. The darker the brown pigment, the more olive-colored the egg appears.

Other chickens that lay colored eggs include the Easter egger, barred rock, Welsummer and Maran, with the color of the egg depending on the breed and its genetics.

“I believe Easter eggers lay the most fun and interesting eggs,” said Garrett Webb, a Texas 4-H member in Fancy Feathers 4-H, part of the Kyle 4-H club. “Each bird lays a different colored egg. The eggs can be blue, green, pink or a blue-green mix.”

“Easter eggers can be any other breed mixed with either of these two main breeds,” he said. “A hen only lays one color of egg her whole life. She does not change colors. If she starts laying blue eggs, her eggs will always be blue.”

Some speculation about speckled eggs

As it turns out, the speckles on speckled eggs are just extra calcium deposits. One reason for the speckled-egg spectacle is that speckles are formed when the egg-shaping calcification process is disturbed. Another possible reason is a defect in the shell gland. Then again, it could result from excess calcium in the hen’s system. Sound a little scrambled? Don’t worry about it … just keep your sunny side up and know there’s probably more than one explanation for this speck-tacular occurrence.

Oh, and although technically considered “abnormal,” speckled shells have been shown to sometimes be stronger than the regular kind.

While genetics primarily determine egg color, other factors can also influence the color and other characteristics of the shell. These factors include a hen’s age, diet, environment and stress level.

“As they age, hens that lay brown-colored eggs may start to lay larger and lighter-colored eggs,” Archer said. “But though this may produce an egg of a lighter or darker shade, it will not alter the egg’s basic color.”

While not directly associated with color, an oddly or irregularly shaped egg may occasionally pop out. This may result from a problem during the hen’s egg-forming process.

Archer said both very old and very young hens are the most likely to lay abnormally shaped eggs.

“Stress factors like disease, heat or overcrowding may also affect the hen and impact the size, shape and quality of the egg,” he said. “A lot also depends on the amount of calcium the hen has in its body and can provide for the egg-making processes.”

You may also be wondering if the color of the egg affects the color of the yolk. Well, it doesn’t, but the hen’s diet certainly does. For example, if a pasture-raised hen eats plants with yellowish-orange pigmentation, the yolks can take on a more orange color. If she eats mainly a corn- or grain-based diet, the yolk is more likely to be a pale yellow.

Here’s a little egg-stra information for you. Research shows that darker, more colorful yolks have the same amount of protein and fat as lighter yolks. However, studies have shown that eggs from pasture-raised hens can have more omega-3s and vitamins as well as less cholesterol.

Speaking of yolks … this will crack you up. Sometimes an egg will have two yolks. While some people think a double yolk is good luck, the reason is more mishap than fortune. A double yolk is a fluke that occurs when a hen ovulates too rapidly, releasing two yolks, usually about an hour apart. These yolks go into the oviduct and eventually wind up in the same shell.

Hormonal changes or a hyperactive ovary will also cause these double releases. These “double-yolkers” are most common among younger chickens due to their reproductive systems not yet being fully developed.

Where can you learn more about chickens and eggs? Well, you could go to the “hen-cyclopedia” of course. But if you don’t have one handy, visit the AgriLife Extension website https://tx.ag/ChickensEggs for more information. — By Paul Schattenberg, Texas A&M AgriLife Communications