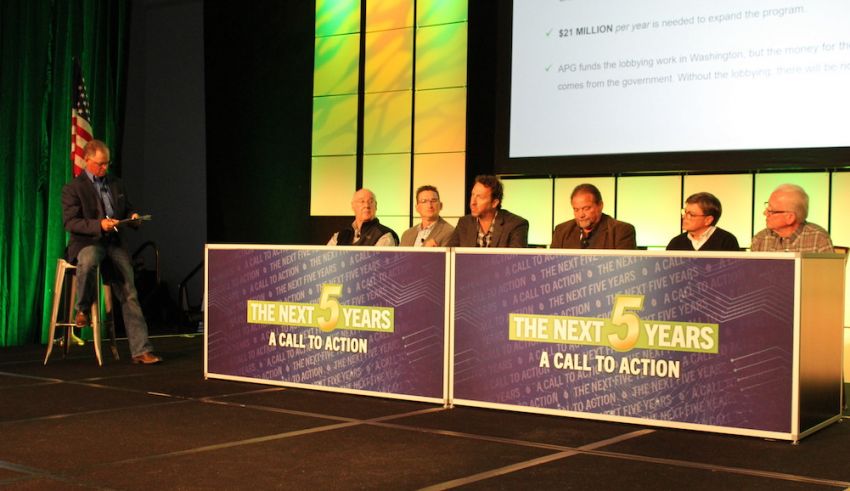 The next five years for American pistachio growers presents challenges and great opportunity, prompting a call for unity at the industry’s Annual Pistachio Conference, which kicked off today in Carlsbad, CA. More than 1200 attendees—an industry record—from three states participated in the conference, which kicked off with a panel of growers who discussed the next five years, as production ramps up.

A grower panel underscored three topics on growers’ minds: accelerating production of pistachios between 2022 and 2026; keeping doors open to American pistachios in key export markets like India; and ongoing pest battles. They emphasized that, while the three topics present challenges, the industry’s trade association, American Pistachio Growers (APG), has proven efficacy in addressing each issue and there could be tremendous opportunity over the next five years with a united industry.

According to data analyzed by Sacramento economist Dennis H. Tootelian, Ph.D., California growers will produce 6.9 billion pounds of pistachios over the next five years, 2.4 billion more than they produced in the previous five-year period from 2017-2021. APG, as the trade association representing the U.S. industry, has kept pace with building consumer demand for the increased volume in recent years in targeted export markets, which he says has helped to support grower pricing in the face of rapid production. Tootelian showed that in countries where APG focused their marketing efforts, exports have grown 36% a year compared to 17% in countries with no APG marketing emphasis.

Tulare County grower Dominic Pitigliano, past Chair of APG and a grower panelist, said, “Ten years ago, APG identified the export markets with the greatest growth potential and our intense focus on those markets has paid off in building consumer demand.”

The grower panel discussed India as a prime growth market for U.S. pistachios where continued marketing could boost opportunities in the years ahead. India possesses the market conditions necessary for a growth market — rising population, growing per capita income, and increasing consumption of pistachios.

APG, which is funded by assessments from growers and government grants, has leveraged those dollars to boost exports and address impediments to trade in the form of tariffs and non- tariff barriers. The grower panel underscored the importance of having APG continue to play a strong role to keep the door open in India.

“APG packs a one–two punch in export markets,” said APG Chair, Dennis Woods. “Getting tariffs reduced or eliminated is the first step, followed by marketing programs that enlighten consumers about the health benefits of American pistachios. The strategy works as long as we all work together,” noting the organization has 64 dedicated growers from three states who volunteer on the APG Board and committees.

While marketing ever larger crops will command the industry’s attention in coming years, so too will challenges that come from the surge in pistachio orchards in California. The Navel Orangeworm (NOW), the major pest threat to pistachios, has been fought with a plethora of tools — costly inputs, winter sanitation programs, and mating disruption techniques.

Tootelian estimated that growers will spend $1.8 billion in total NOW management costs in the next five years.

APG has led the industry effort to use a novel tool in the fight against NOW — a U.S. Department of Agriculture facility in Phoenix that rears sterile Navel Orangeworm moths for aerial distribution over a few thousand acres of pistachios and almonds in Kern County. APG helped to secure $8 million in federal funds for the pilot project, but the USDA has recommended an additional $21 million per year to expand the project. The Phoenix facility was instrumental in rearing sterile pink bollworm moths that led to the successful eradication of the cotton pink bollworm in California in 2018.

“I know at the very least we can suppress Navel Orangeworm because we had similar success in the cotton industry,” said Ted Sheely, a pistachio and cotton grower who chairs the NOW Action Committee, the industry advisory committee that government requires in such situations. “We need to continue to push hard for the $21 million per year that will be required to keep the Arizona facility going and expand the program to the extent that we need it. Navel Orangeworm is an industry-wide concern, and we need APG to secure the funding to support this program.”

“APG’s leadership has envisioned the future and how we should position the industry for success,” said APG President Richard Matoian. “As the industry’s trade association, we need every grower to participate in APG in order to fund our ability to make our future plans reality. We’ve done a good job so far, and we’re optimistic about the next five years.”