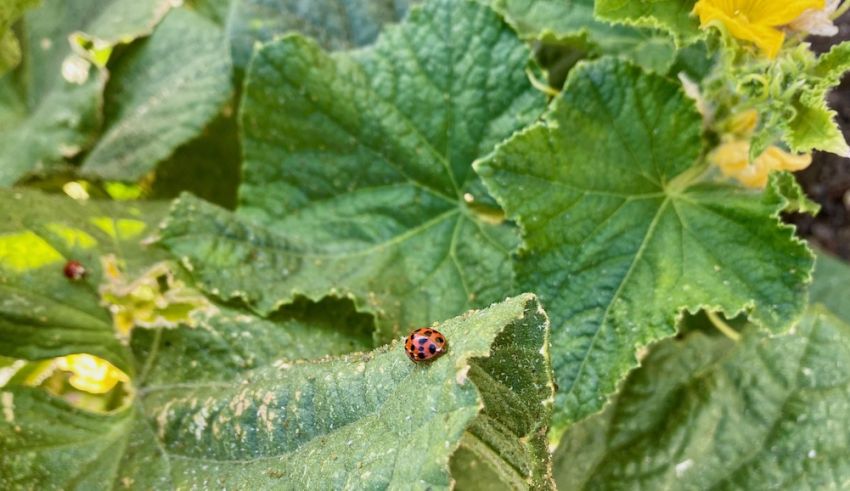 As the force that feeds and nourishes the population, agriculture is one of the most vital industries in the U.S. economy. To accommodate the country’s growth over the years, agricultural practices have evolved to become more efficient, capable of reliably meeting the population’s daily needs. But these efficient practices also come with environmental costs, and many farmers and consumers are increasingly seeking out more sustainable alternatives.

Organic farming is an approach to agriculture that attempts to mimic nature and natural processes when raising crops and livestock. Rather than using techniques of larger-scale industrial agriculture, like genetic modifications, monoculture farming, and synthetic fertilizers and pesticides, organic farmers seek to conserve biodiversity and natural resources on their farmland.

Organic products have seen a boom in demand in recent years, and there are a number of reasons why consumers might be seeking out organic products. Organic techniques appeal to environmentalist consumers who value a more sustainable approach to agriculture that promotes biodiversity, limits pollution, and increases carbon capture. For meat and dairy consumers, livestock production on organic farms is considered to be a more ethical and humane way to raise animals because they are given more access to the outdoors, better feed, and fewer hormones and antibiotics. Health-conscious consumers can point to evidence that organic products have health benefits like greater nutrient density and lower levels of toxic metals and pesticide residue than conventional agricultural products.

Whatever the reasons, organic farming has increased substantially over the last decade or so. In 2008, the U.S. had 10,903 organic farms covering around 4 million acres of farmland. In 2019, there were nearly 16,500 organic farms on 5.5 million acres. And these farms have grown alongside consumer demand: the sales of organic products have more than tripled over the same span, rising from $3.1 billion to $9.9 billion. 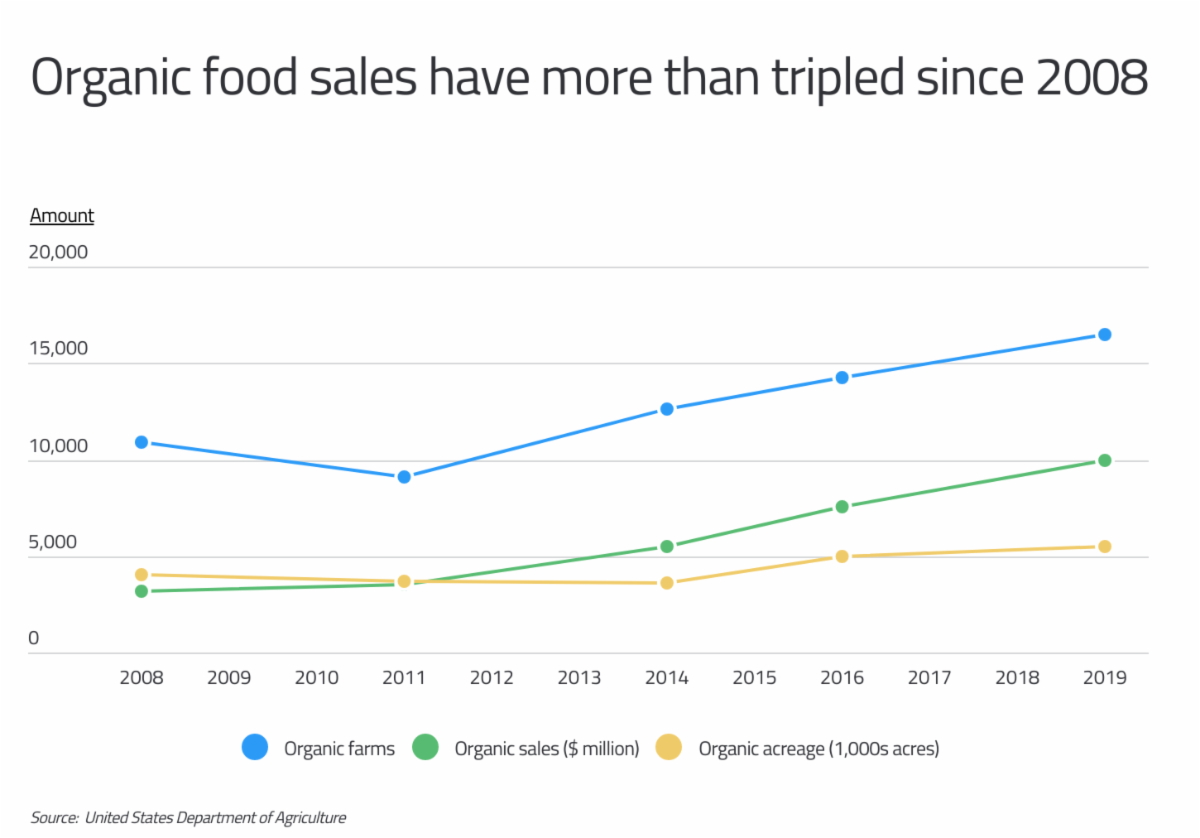 Within the nearly $10 billion organic food market, milk, chicken, and eggs are the top-selling products. Organic milk leads all products with sales of more than $1.5 billion per year, while chicken sees $1.1 billion in sales annually and eggs generate $887 million. Apples are the top-selling form of organic produce, with $475 million in annual sales. 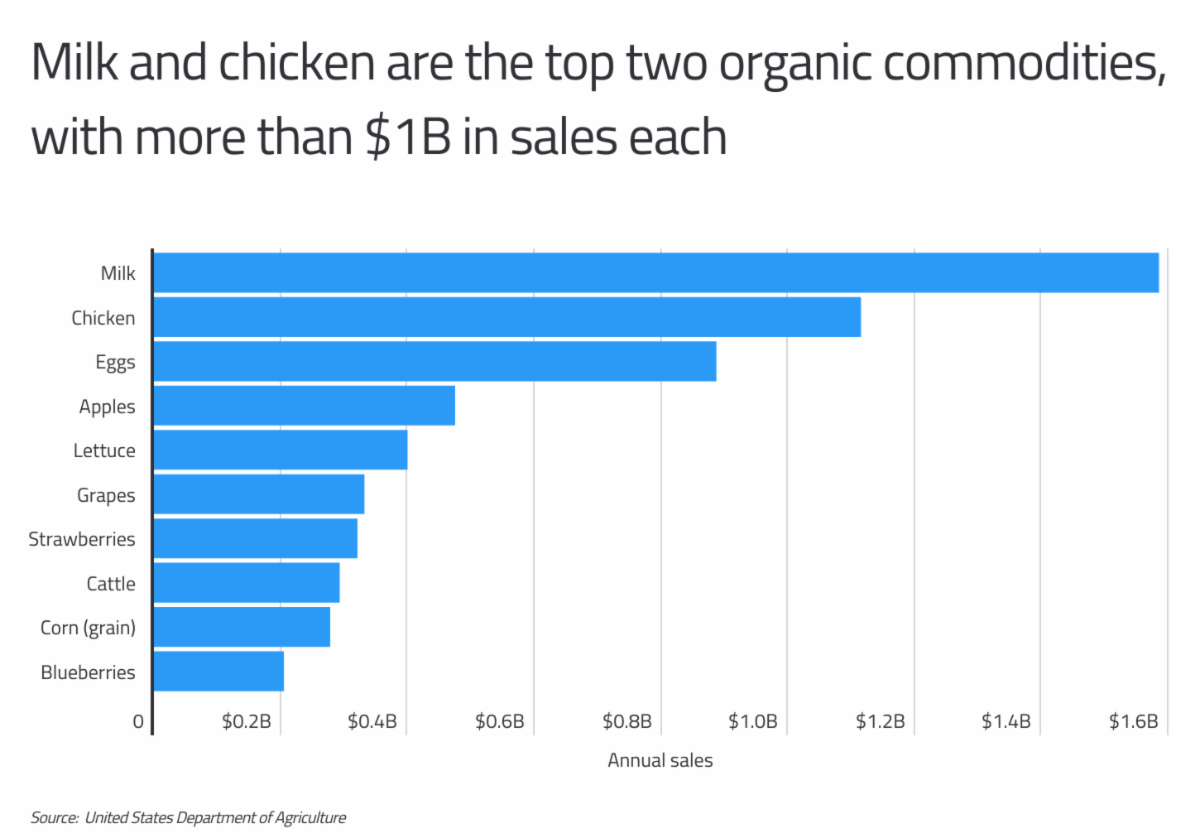 While the organic farming industry has seen tremendous growth, not all farmers are adopting organic practices. Many large-scale agricultural operations in the Midwest and South have relatively low numbers of organic farms and acreage devoted to such operations. But one location where organic agriculture has taken hold deeply is California. California is home to more than 3,000 organic farms—more than twice the next-highest state—and the total acreage of organic farms in the state totals nearly 1 million acres. 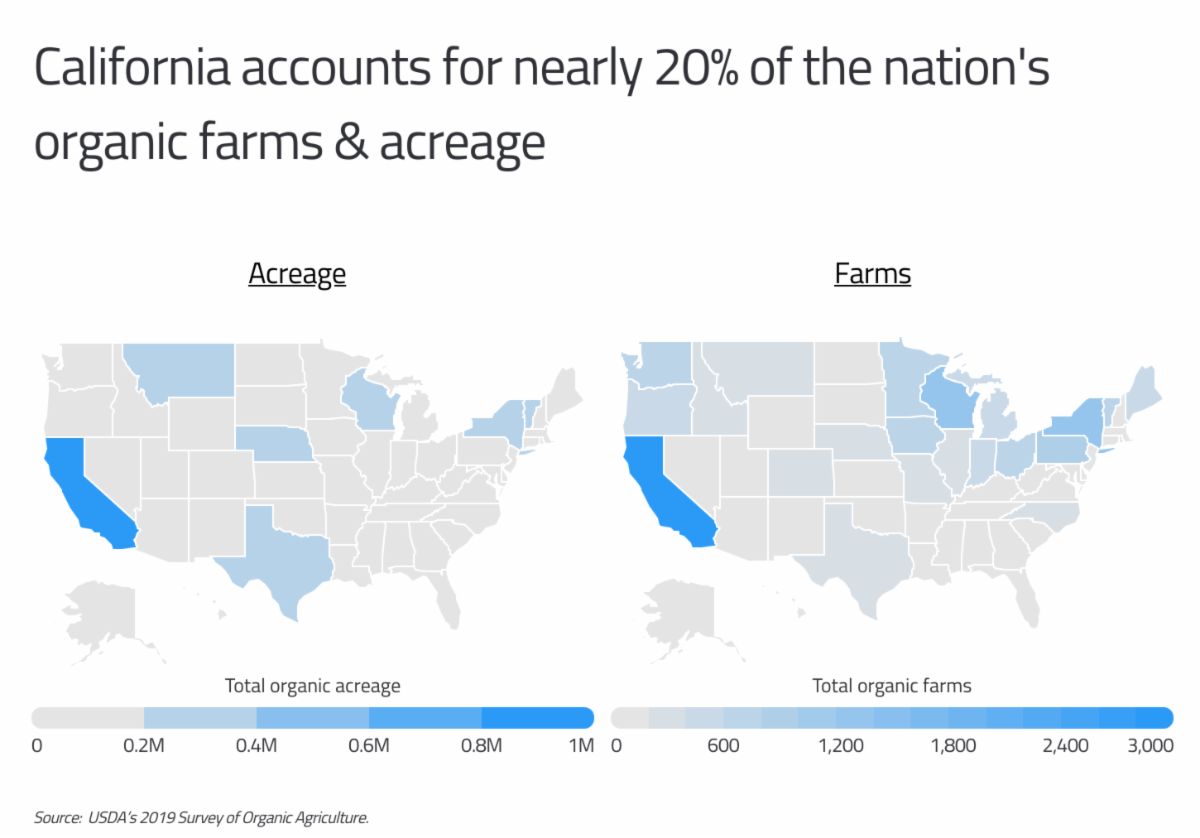 California is the nation’s top state for agricultural sales overall, so it is unsurprising that the state is also the leader in organic production. In relative terms, several other states devote a greater share of their farmland to organic farming than California, where organic farms represent only about 4% of the state’s agricultural acreage. Instead, the list of top states for organic farms on a relative basis is led by northeastern states including Maine, New York, and Vermont—the runaway leader, where organic acreage accounts for nearly 17% of its total.

The data used in this analysis is from the USDA. To identify the states with the most organic farms, researchers at Commodity.comcalculated the total certified organic acres operated as a percentage of total farmland in each state. In the event of a tie, the state with the greater number of organic farms as a percentage of total farms was ranked higher. Only states with available data from the USDA were included in the analysis.

The analysis found that there are 965,257 acres of organic farmland in California, which account for 3.97% of all farmland there. At 3.97%, California has the 4th largest organic farmland share in the United States. Here is a summary of the data for California:

For reference, here are the statistics for the entire United States:

For more information, a detailed methodology, and complete results, you can find the original report on Commodity.com’s website: https://commodity.com/blog/most-organic-farms/