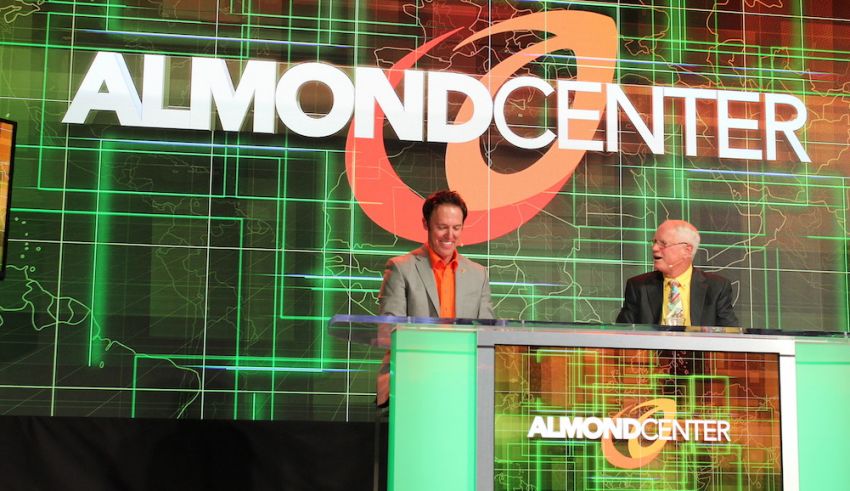 Almond Board of California — The 49th annual Almond Conference returned to Sacramento with a bang. Renovations to the newly named SAFE Credit Union Convention Center forced the conference to shift locations in 2019, and COVID-19 precautions forced the 2020 conference to a virtual format.

The Almond Board of California (ABC), abiding by Sacramento County safety mandates, welcomed 3,308 industry members back to downtown Sacramento with the biggest trade show in Conference history. 270 exhibitors blanketed the bottom level of the convention center with the latest products and innovations available to growers.

Day one of the conference, Tuesday, December 7, was dedicated for tradeshow time and the State of The Industry address. ABC President and CEO Richard Waycott and 2021/2022 Board Chairman Brian Wahlbrink headlined the address as co-anchors of “AlmondCenter”, a fast moving and informative ninety minutes of almond action news. ABC staff were positioned as field reporters who brought the latest information to attendees about shipping delays, water issues, marketing efforts, industry resources and more.

At the conclusion of the “AlmondCenter” production, Waycott and Wahlbrink announced the winners of the annual industry awards. George Goshgarian Sr. was presented with this year’s Almond Achievement Award, and Ken Stevenson was the recipient of the new Almond Technical Achievement Award. ABC and the industry thanked both award winners for their dedication and service to the industry over their respective careers. The industry then adjourned back to the tradeshow for an opening reception.

The vast amount of information dispersed at The Almond Conference began on day two, Wednesday, December 8. Growers and industry members learned the latest about key topics during three blocks of four consecutive sessions at 8:40 a.m., 10:00 a.m. and 2:45 p.m. A break in the action on day two was during lunch as Mattson President and Chief Innovation Officer Barb Stuckey addressed attendees. She talked about the latest in product development such as almond milk base – a 100 percent almond powder that when water is added becomes almond milk. Stuckey also identified areas that she sees as opportunities for almonds to enter the market like almond baked goods, pizza crusts, pastas and tortilla chips.

Educational sessions continued into day three of the conference with 11 more talks on marketing tactics, production information and more. Attendees also got a chance to hear the incredible story of Dan On, global CEO of Dan-D Pak. Born in Saigon, Vietnam — now known as Ho Chi Minh City – On’s journey includes escaping the Vietnam War, surviving pirate attacks on the open sea and living in a Malaysian refugee camp. On ultimately was brought to Canada through a Hope Lutheran Church program. After being adopted by Irish Canadian parents who sold granola, On came up with the idea to sell the ingredients separately which became a lucrative business decision. The Dan-D Group is now an importer, manufacturer, and distributor of cashews and other tree nuts, nut butters, dried fruits, snack foods and spices from around the world with approximately 1,000 employees in Canada, Vietnam, Thailand, United States, Taiwan, Hong Kong and China, with headquarters in Richmond, British Columbia.

The Almond Conference 2021 wrapped up with the annual Conference Gala Dinner, with a twist. This year, the Gala Dinner was transformed into the Nuthouse Honky Tonk Bar with a private concert from up-and-coming country music star Tyler Rich. As a California native, Rich entertained hundreds of industry members with original songs such as “The Difference” and “Leave Her Wild”.

ABC also included a few special presentations at the Gala Dinner. The 2020/2021 Almond Leadership class was recognized for their dedication and effort over the past two years, as the Covid-19 pandemic extended the 2020 class experience. ABC also recognized the lifetime contributions of Bill Morecraft Jr. who is retiring from Blue Diamond Growers after 35 years in the industry.

During the three-day event, ABC and the Almond Leadership Program ran a silent auction that netted over $11,000 for California Future Farmers of America. Thanks to the generosity of Emerald Sponsor Qcify, that total will be increased to over $36,000 going towards scholarships for graduating FFA students planning to pursue a degree in agriculture.

The Almond Conference 2021 would not be possible without the support of sponsors. ABC would like to thank the 2021 Metal Sponsors for their generosity this year.

All Conference presentations will be available at Almonds.com/Conference. The Almond Conference will again be in Sacramento at the SAFE Credit Union Convention Center in 2022. Industry members are encouraged to save December 6-8, 2022 as dates for the conference.