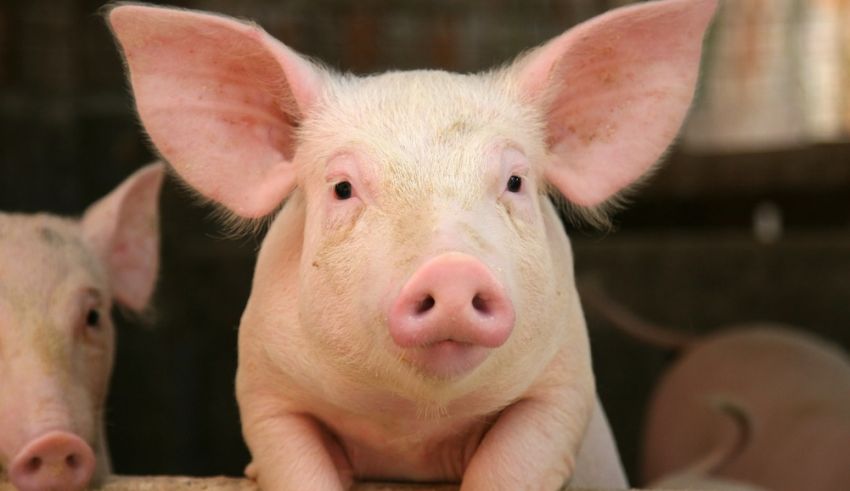 USDA International Trade Report — Mexico is the third-largest pork importer in the world and traditionally the largest U.S. market for pork exports by volume. Over the past few years, shipments to this important market have faced headwinds. First, retaliatory tariffs related to Section 232 actions disadvantaged U.S. product. Then the coronavirus pandemic and a weak Mexican economy weighed on demand.

With retaliatory tariffs on pork resolved and economic recovery underway, U.S. pork shipments to Mexico recovered in 2021 and are expected to improve further next year. In the second quarter of 2021, Mexico was the top international destination for U.S. pork, with shipments reaching a record high in August and again in September. With Mexican exports elevated and high feed prices keeping production growth moderate, Mexico has looked to the United States for product and will likely continue to do so. This comes at a critical juncture for the U.S. pork industry as Chinese demand is expected to remain below the record levels of 2020, renewing emphasis on traditional markets. 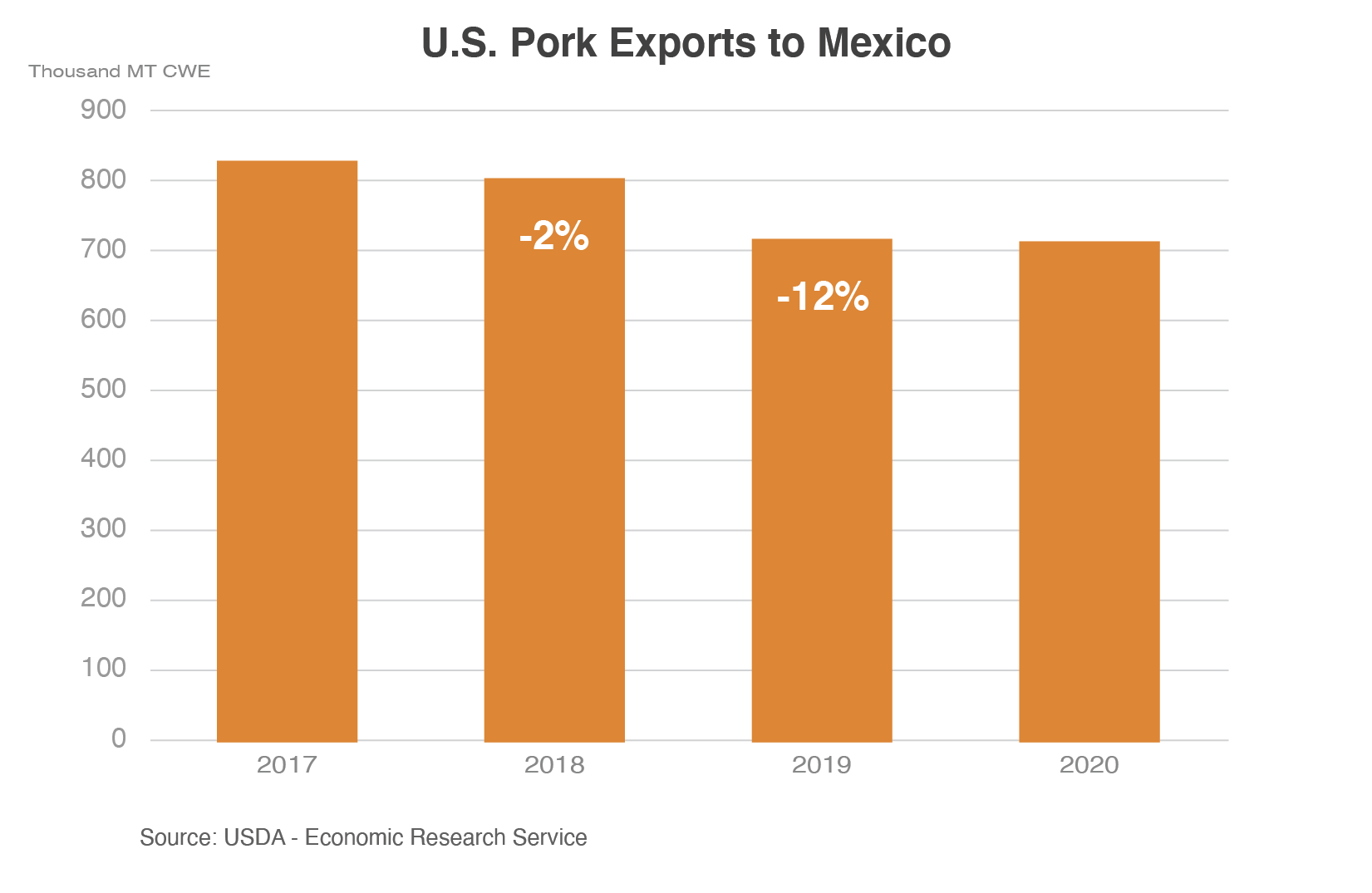 In March 2018, the United States announced that tariffs would be imposed on steel and aluminum from a number of countries – including Mexico – on national security grounds (Section 232). In response, Mexico imposed retaliatory measures on steel, aluminum, and a variety of agricultural products – including pork. Starting in June 2018, U.S. pork exporters faced a 10-percent tariff in one of their most important markets. This rate rose to 20 percent in July 2018. With these actions, the United States was once again exporting pork to Mexico at most favored nation levels, essentially losing the benefits achieved by the North America Free Trade Agreement. 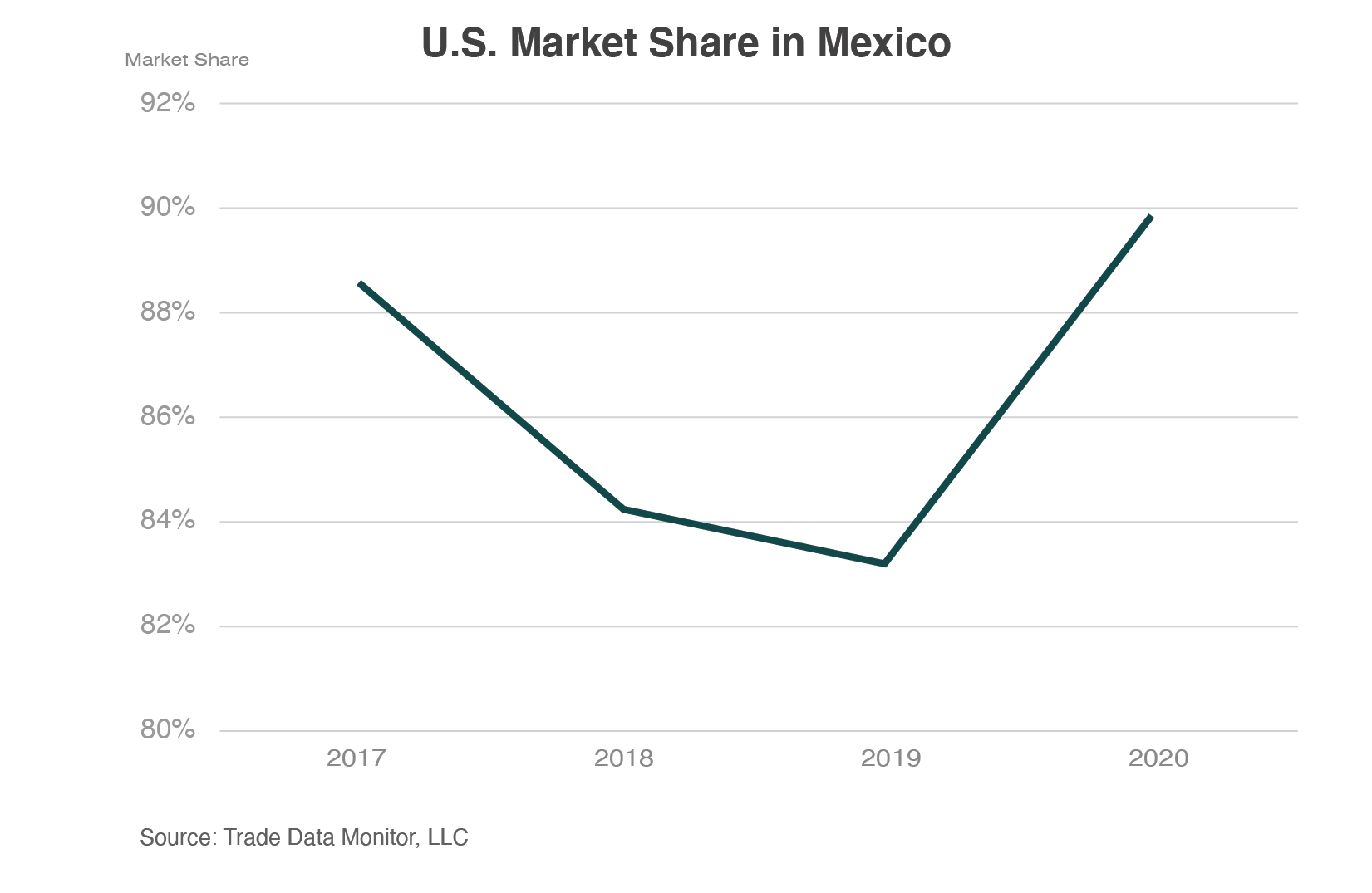 Immediately after the imposition of retaliatory tariffs, U.S. pork exports to Mexico dropped to below year-earlier levels and remained subdued during the rest of the year. From January through May of 2018, U.S. shipments to Mexico were running 7 percent higher than 2017; however, they ended the year 2 percent lower in the face of the tariff-rate disadvantage. This weakness persisted into 2019 as U.S. market share continued to erode. In 2017, the United States captured nearly 90 percent of the Mexico imported pork market versus 83 percent in 2019. 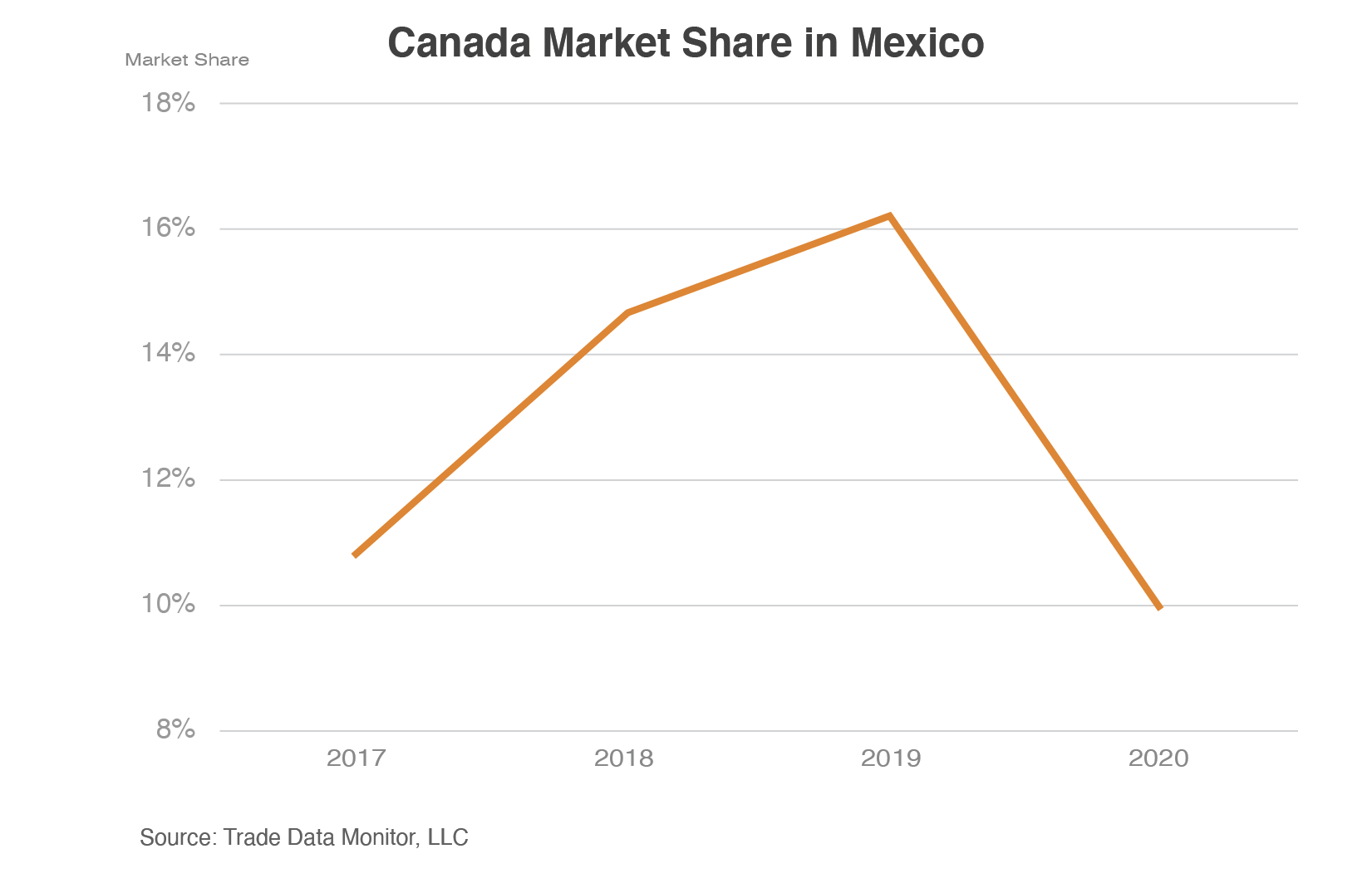 Canada was the primary beneficiary as U.S. pork shipments to Mexico came under pressure. In 2018, Canadian exports to Mexico surged 31 percent year-over-year and then grew a further 5 percent in 2019. This resulted in a rise in Canada’s market share of Mexican pork imports to 16 percent compared to 11 percent in 2017.

In May 2019, when the United States repealed the 232 tariffs levied on Mexico steel and aluminum, Mexico responded by removing retaliatory tariffs on U.S. pork. Shipments to Mexico showed some recovery but remained below the levels seen in 2017 – prior to the trade dispute. The United States was able to recover market share in 2020 without the headwinds presented by a tariff-rate disadvantage; however, a weak Mexican economy and the coronavirus pandemic created a new challenge for pork trade with Mexico. 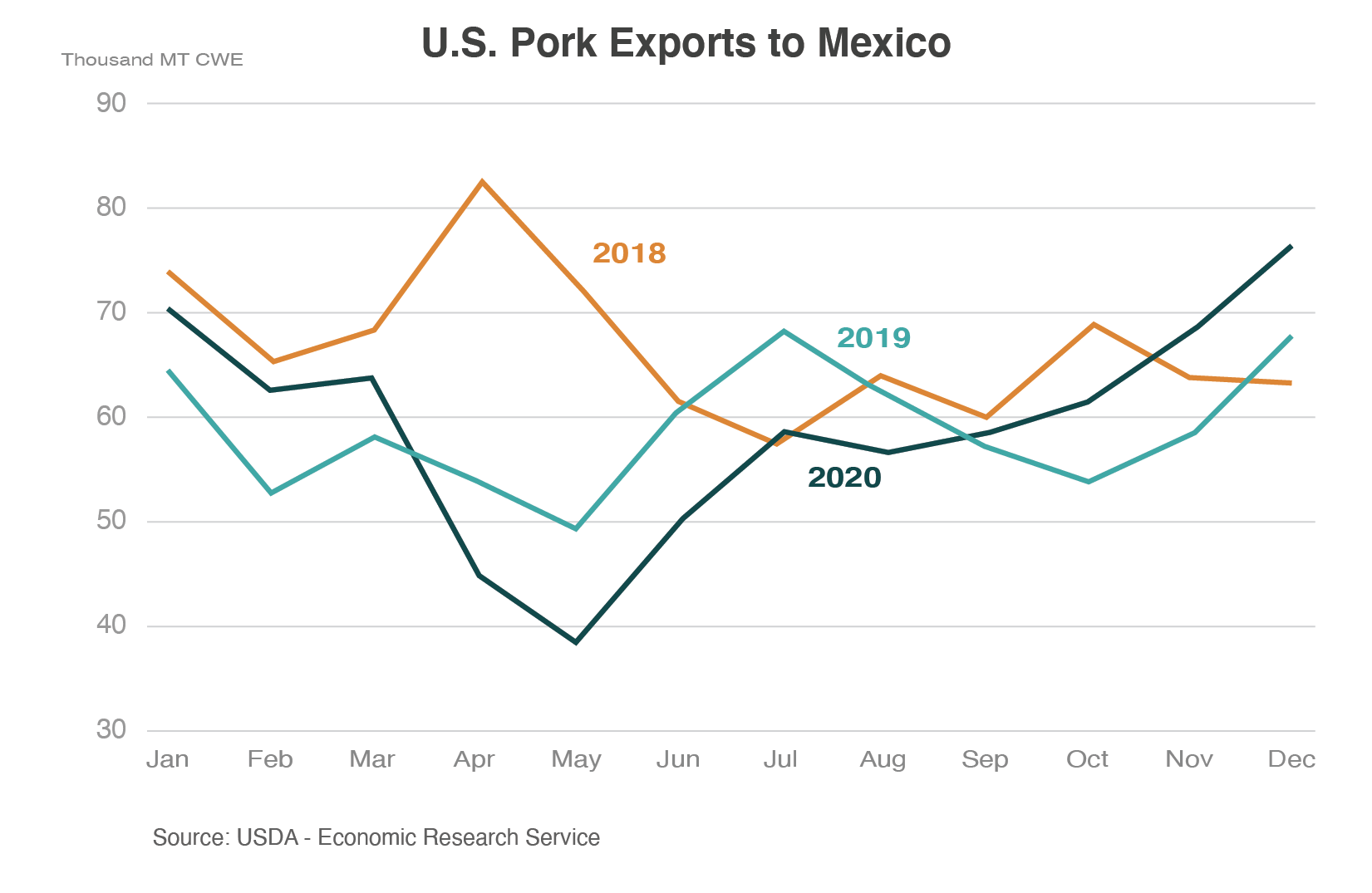 With tariff-free access restored, U.S. pork exports to Mexico started 2020 strong, growing 12 percent year-over-year in the first quarter. However, the onset of the coronavirus pandemic quickly began to wreak havoc and weigh on pork shipments to Mexico. By the end of the year, U.S. pork exports to Mexico were virtually flat. Market share recovered, but high pork prices, a weak peso, and economic disruption seriously constrained Mexico’s aggregate import demand, preventing recovery from the low levels shipped in 2019.

Processing disruptions and a dramatic shift from foodservice to retail initially caused tight supplies and correspondingly high prices in the United States. This had an immediate impact on pork exports to Mexico, which fell sharply. Record demand from China also made competition for product fierce. Further limiting the ability of Mexico to import U.S. pork was a surging dollar and weak peso. As the year went on, trade stabilized but was unable to overcome sales lost earlier in the year.

While economic recovery in Mexico has been slow and inflation remains a concern, pent-up consumer demand is expected to support pork consumption in 2021 and, in 2022, should allow U.S. exports to return to the rising trend seen before the pandemic. Last year, Mexican pork consumption came under considerable pressure because of weak economic conditions and exceptionally strong import demand in China, which pulled domestic product into export channels. 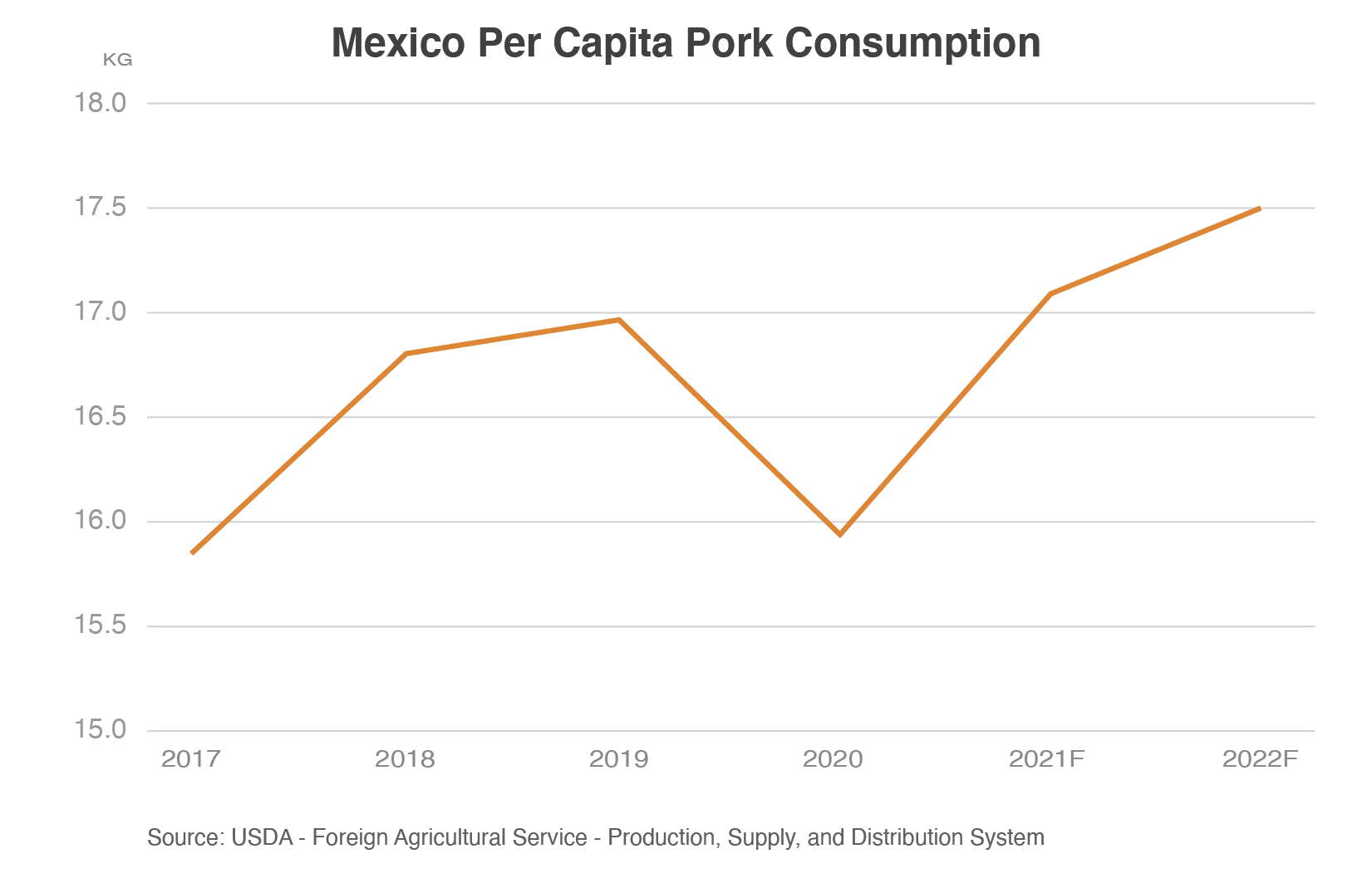 Mexican exports are expected to remain elevated as opportunities in Japan and South Korea are expected to offset slowing shipments to China during 2021. Segments of the Mexican pork sector will continue to become more export oriented, particularly due to growing exports to Japan given the improved market access granted under the Comprehensive and Progressive Agreement for Trans-Pacific Partnership and the Mexico/Japan Executive Agreement. Furthermore, Mexico is well suited to take advantage of the often-labor-intensive specifications demanded by buyers in Japan. In 2022, Chinese import demand is expected to firm and rekindle opportunities for Mexican exporters in that all-important market. 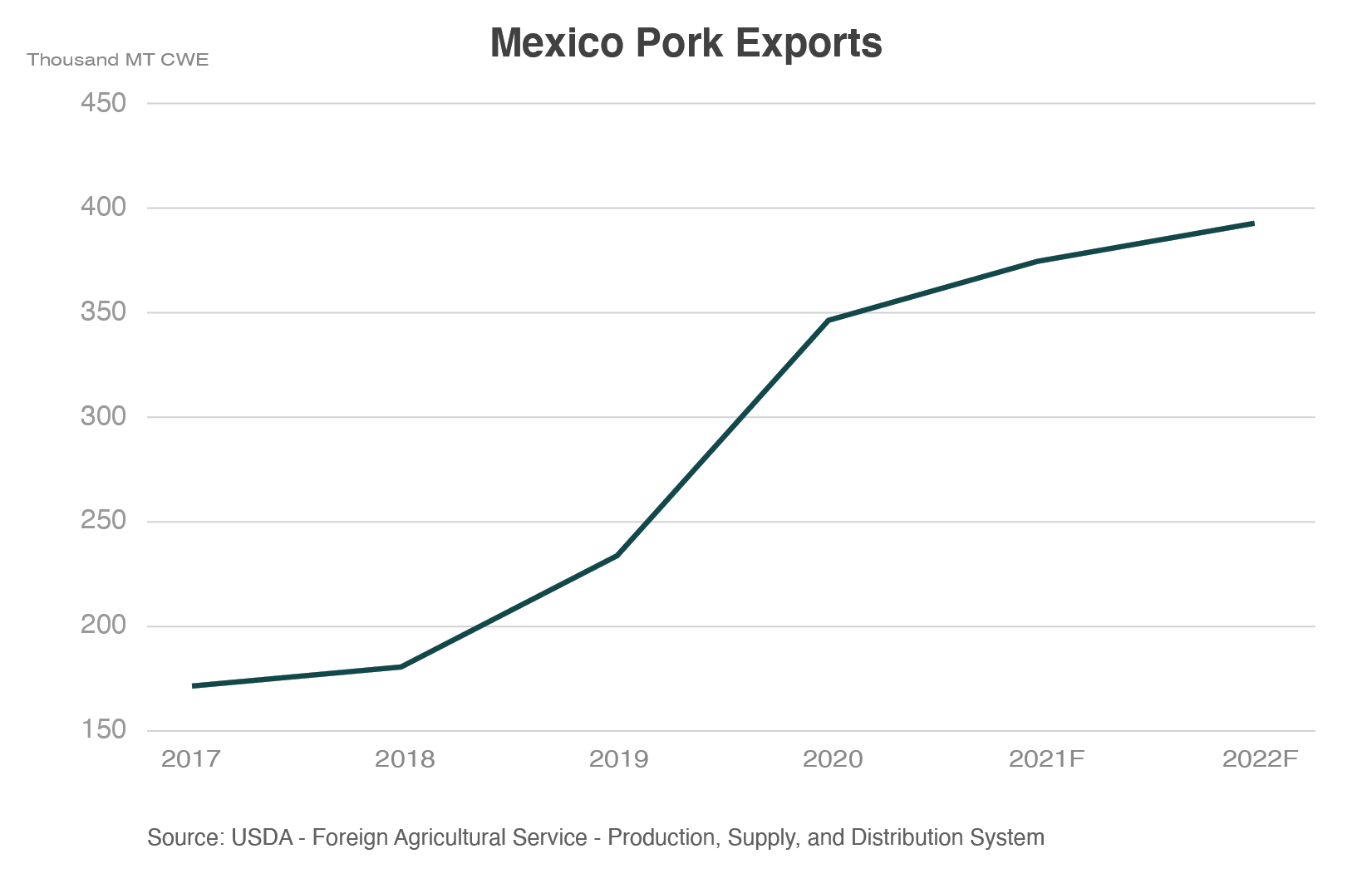 As Mexican exports of high-value pork cuts continue to grow, domestic consumption will be augmented by imported product. With Chinese import demand waning during the rest of this year and the peso strengthening, Mexico will find itself better able to compete for pork imports on the international market. Mexico’s ability to procure imported pork in 2022 is expected to be maintained despite growth in Chinese import demand. This is because Chinese imports will remain below the record levels of 2020, and the Mexican economy is expected to be on stronger footing. Both this year and next, trade will be a key part of meeting Mexico consumers’ demand for pork. 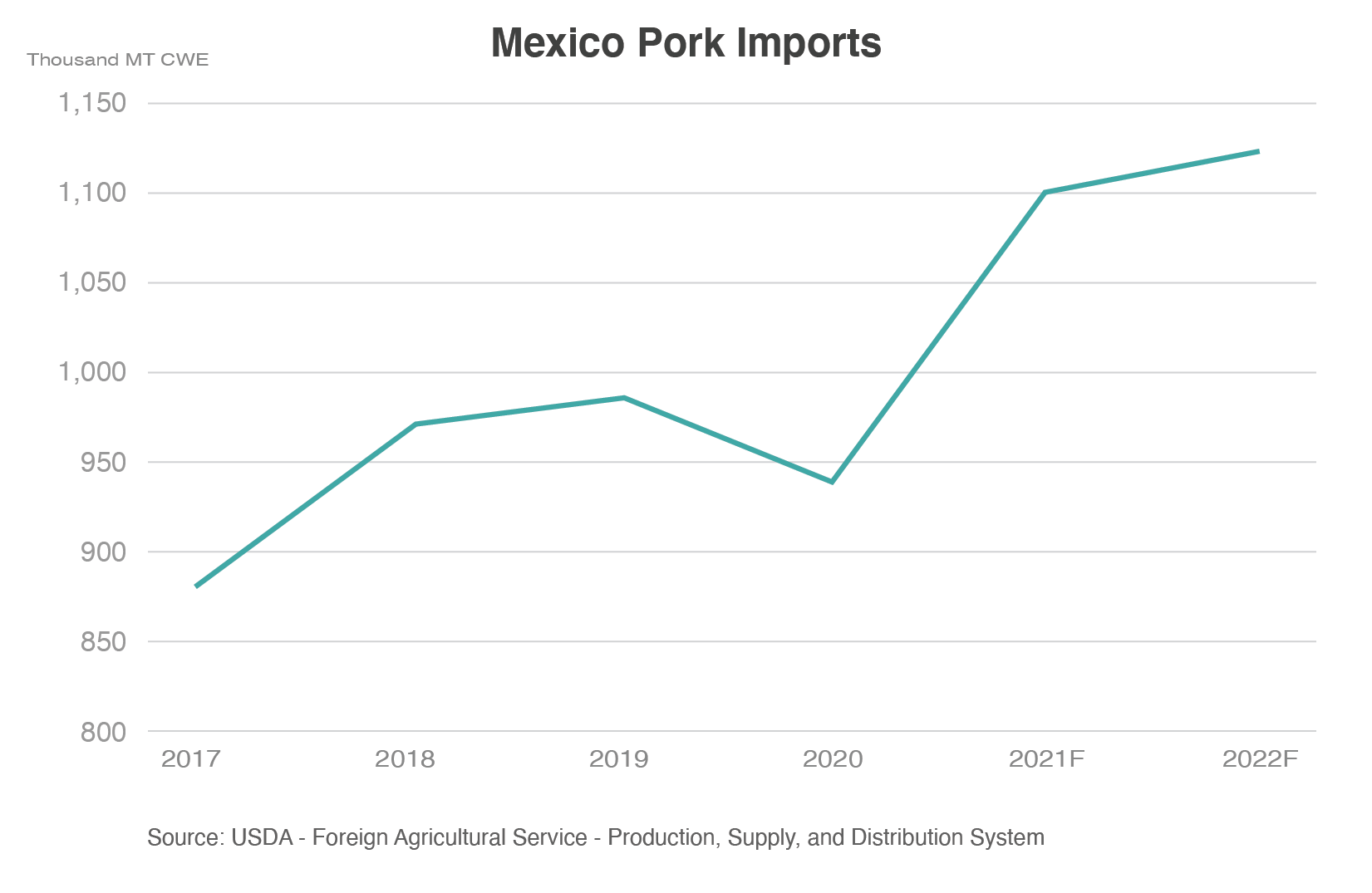 This is good news for the U.S. pork sector, which will be looking to offset lower shipments to China in 2021 and 2022 where trade is expected to remain below the record levels of last year. Through September 2021, U.S. pork exports to Mexico increased 30 percent over the same period in 2020. Firm demand has kept hog and pork prices in Mexico above those in the United States, allowing for robust trade with what can sometimes be a price-sensitive market – despite very strong U.S. prices.

Expected strength in import demand in Mexico is a key feature underpinning the current U.S. pork export forecast. Returning trade to the levels seen prior to the disruptions of the last two years will help partially offset the impacts of lower shipments to China in 2021. In 2022, strong Mexican import demand is expected to push U.S. pork exports to record levels. Competition to sell product into many international markets will be fierce as Chinese import demand remains below the record levels of 2020, making Mexico particularly important going forward. Given its geographic proximity and existing trade linkages, the United States is well positioned to capitalize on growth in Mexican import demand. 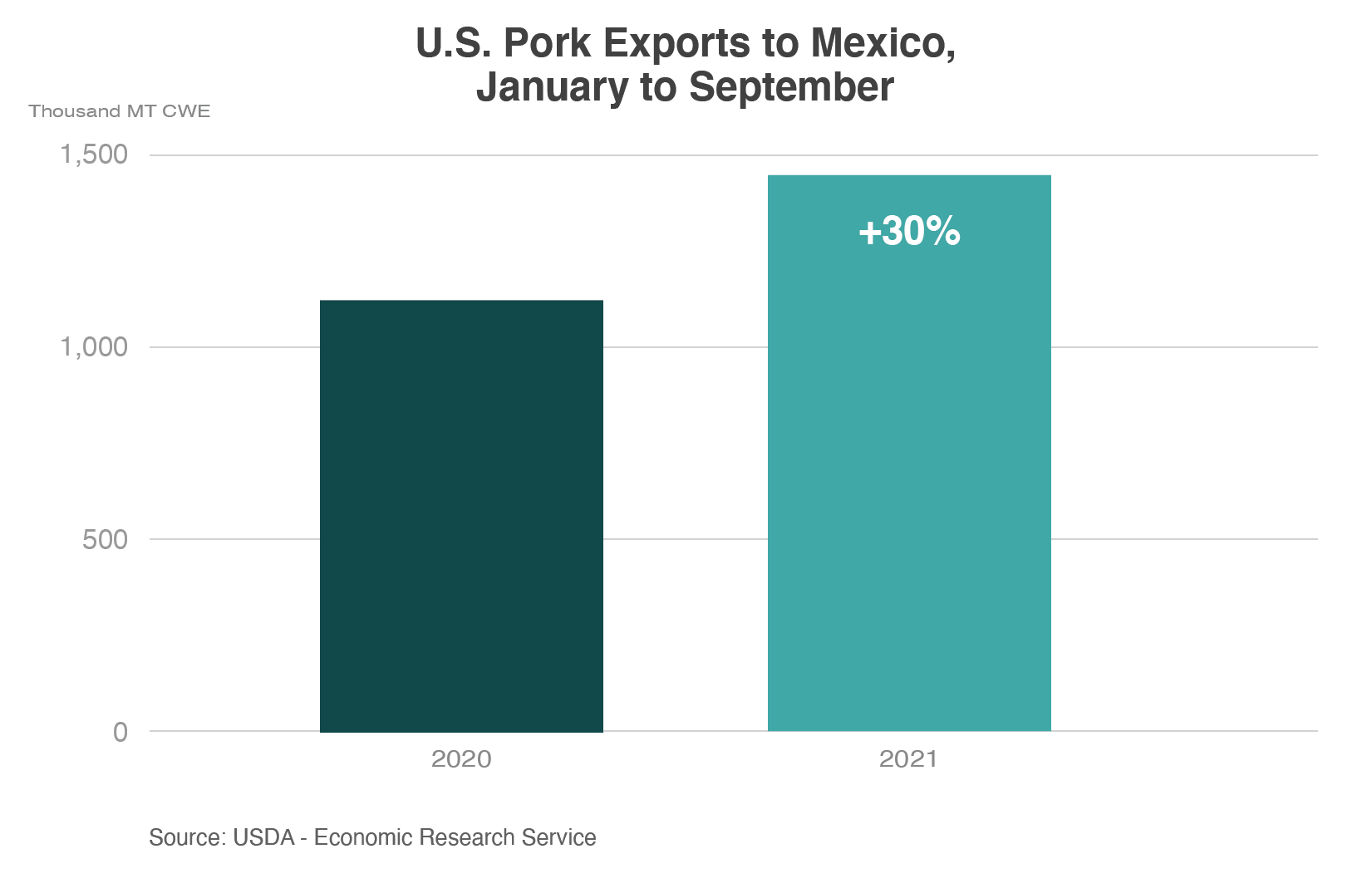