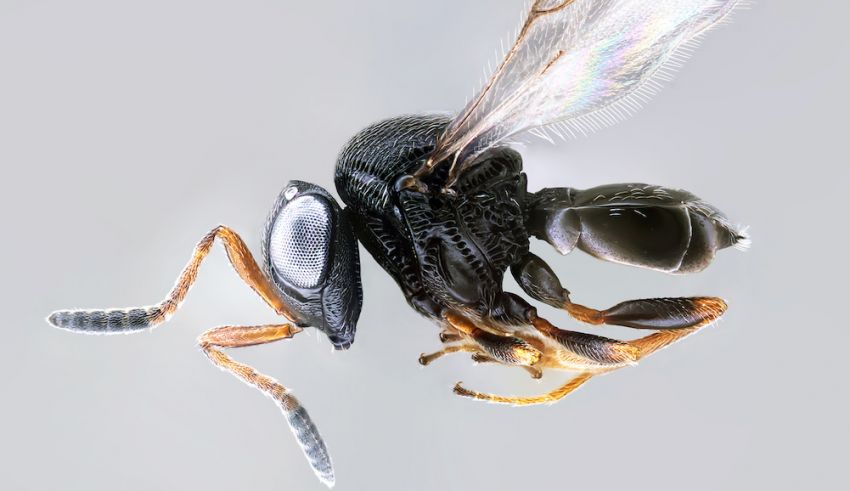 A tiny wasp may be the solution for managing an agricultural pest causing major economic damage to fruit, vegetable, and field crops in North America and Europe.

Biological control is the process of reducing or mitigating pests or pathogens by using the pest’s or pathogen’s natural enemies. The samurai wasp is a known natural enemy for the BMSB in Asia, and researchers are understanding how it behaves in non-native environments.

At the ARS Beneficial Insects Introduction Research Unit in Newark, DE, researchers are observing the behaviors of both quarantined samurai wasps from Beijing and local wild populations. They found these wasps have a strong preference for parasitizing BMSB’s eggs.

“Parasitic wasps have the amazing ability to detect kairomones [chemical substances emitted by one organism and detected by another organism] that are left on surfaces or in the air of their hosts,” said Dr. Kim Hoelmer, research entomologist and research leader at the Beneficial Insects Introduction Research Unit.

“In the field, when a female samurai wasp looks for evidence of her host in the environment, she can detect her host’s kairomones left on a leaf’s surface. The wasp increases her search when she detects the kairomones and that increases her probability of finding the host.”

The research shows promise in that samurai wasps prefer their natural hosts’ eggs over those of other species.

This finding does not surprise researchers since it is common for parasitoid wasps to have close relationships with their hosts.

“The more intimate the relationship is, the better parasitoid wasps are as biocontrol agents,” said Dr. Matt Buffington, research entomologist with the ARS Systematic Entomology Laboratory, located in the Smithsonian National Museum of Natural History in Washington, DC.

Buffington and postdoctoral ARS scientist Elijah Talamas were instrumental in correctly identifying the samurai wasp from other Trissolcus species.

“Parasitoid wasps play major roles in population regulation [of pests]. With this one species, we can explain how biological control works in our environment,” said Buffington.

But do samurai wasps exhibit the same behaviors in the wild?

In addition to laboratory studies, researchers are observing samurai wasps in natural environments, such as orchards and crop fields, where the BMSB is present. These wasps are adventive in North America, meaning they arrived accidentally without any human aid.

At the ARS Appalachian Fruit Research Station in Kearneysville, WV, researchers are studying how samurai wasps reduce BMSB populations across a landscape. The research aims to determine if samurai wasps can survive in areas with other agricultural factors such as pesticides.

“We hope that samurai wasps can reduce those populations in wild host habitats, so we have less pressure in our agricultural areas,” said Leskey.

The wasp is tiny; approximately 1.5 mm or the size of a sesame seed.

Even though the samurai wasp shows promise as a biological control agent, researchers must follow a rigorous process to ensure that the samurai wasp’s impact is limited to its host and is not a threat to animals, humans, and crops.

BMSB has been detected in 47 states and four Canadian provinces. BMSB is responsible for crop damage costing millions of dollars each year. This pest is also causing agricultural damage abroad after its infestation in European countries.