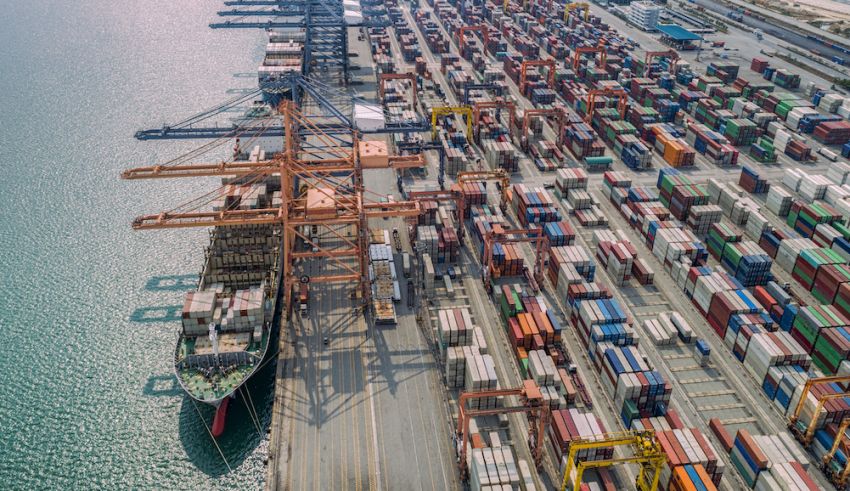 The U.S. economy is on a strong growth path and cash-rich consumers are spending robustly on both services and goods. Roughly 80% of the U.S. adult population has now received at least one vaccination shot, leading to renewed participation in many public activities.1 But while the U.S. economy is running hot, it is still very much in the grips of the pandemic. Its negative influence, however, has steadily shifted from curtailing demand to derailing supply chains.

According to a new Quarterly report from CoBank’s Knowledge Exchange, supply chains are arguably in the most dire condition since the start of the pandemic, as lead times for manufacturing inputs recently reached record highs. Persistent supply chain disruptions and labor shortages are adding significant costs to business operations, and consumers will feel these effects through higher prices for months to come.

“Supply chain snarls are likely to persist well into 2022, and so will elevated inflation,” said Dan Kowalski, vice president of CoBank’s Knowledge Exchange division. “The latest producer price index data for August was up 20% year-over-year, while the consumer price index increased just 5.2%. So it’s clear that many businesses are passing only a small portion of those cost increases on to the final consumer. We expect that will change in the months ahead and many businesses will raise prices.”

Rapidly rising input costs and product shortages are hitting agriculture particularly hard, as ag commodity prices have flattened and inflation compresses margins. However, robust exports have kept much of agriculture in the black. The USDA currently projects that China will import $39 billion of U.S. ag products in 2022, up from an estimated $37 billion in 2021. While that forecast looks promising, success will be much more dependent on prices remaining high as volume is likely to fall.

Corn, soybean and wheat prices declined from their third-quarter highs, but will likely rebound due to tight supplies and rising demand for soybean and vegetable oils for use in renewable diesel fuel. The export picture remains cloudy in the short term as grain terminal operations in the U.S. Gulf region are just beginning to recover from Hurricane Ida and export volumes remain depressed.

Returning demand from the food service sector led to extraordinary strength in the U.S. meat and poultry complexes throughout the summer. While pent-up demand has been a tailwind for the meat industry in recent months, the full effect of inflation is expected to test consumers’ appetite for meat during the fourth quarter.

Foreign demand for U.S. animal protein has remained robust. Combined U.S. exports of beef, pork and chicken are forecasted to reach record highs in 2021, increasing 3% over last year. But inadequate labor availability continues to dampen productivity throughout the meat industry and is expected to remain a concern throughout the supply chain into 2022.

Strong consumer demand for chicken breast meat and wings, combined with improved export demand resulted in a continuation of historically low ending stocks. Freezer inventories of broiler meat at the end of August were reported to be down 3% from July, and 20% below prior year. Beyond labor, hatchability remains a major constraint to chicken production growth. Weekly incubation rates have been reported at 3-5% higher than a year ago, yet harvest is down 1% from last year.

The U.S. beef industry continues to benefit from elevated domestic demand and extraordinary foreign demand. U.S. beef exports are on pace to hit record levels for 2021, with Korea up 17% in volume through July, and China up 137% compared to 2020. Per-head packer margins remain at historic highs. In August, the choice boxed beef cutout valuation averaged $322/cwt., up nearly 50% compared with the same period last year.

African Swine Fever (ASF) continues to add trepidation to the U.S. pork sector outlook. Roughly 27% of U.S. pork is exported. If ASF is found in U.S. hogs, it could effectively shut down exports overnight. Meanwhile, pork prices and hog values have responded favorably to tight supplies. Pork cutout prices are up 60% from a year ago and are 40% higher than the five-year average. Nearby hog futures eclipsed $120/cwt for the first time since 2015.

Despite the congestion in the global supply chain, exporters continue to move big volumes of U.S. dairy products, particularly milk powder and cheese to Mexico and Asia. Domestic demand for dairy products also remains resilient with the return to school lifting fluid milk demand and the expanded cheese processing industry’s demand for milk is constant and growing.

U.S. cotton prices have continued their slow but steady climb over the past 18 months, rising nearly 20% since the beginning of the year, outpacing both corn and soybeans. Texas is poised to post its second largest crop in history. Exports to China had been on a torrid pace since the beginning of 2020 but have stalled over the past two months. However, other markets have picked up the slack as world mill use has outpaced production for two years in a row.

Flood damage resulting from Hurricane Ida has reduced rice harvest prospects on a crop that was already set to be smaller year-over-year on lower planted acreage as farmers switched acres to corn and soybeans. Concerns over flood damage lifted rough rice futures late in the quarter. Global rice supplies remain ample and have dampened the outlook for U.S. rice exports and prices.

Hurricane Ida also impacted Louisiana’s sugarcane region. Crop damage was modest, but it will likely take a small bite out of local yields and extraction rates. Louisiana provides about 20% of the total domestic sugar production. The most consequential impact of the hurricane is that it temporarily shut down the sugar refining facilities in New Orleans, adding another supply chain problem for end-users. Spot wholesale cane prices have spiked to the mid-50 cent range, compared to the 2015-2019 average of 35 cents/lb.

California tree nut growers anticipate a smaller crop but sharply higher prices. Intense drought conditions trimmed bearing acreage and yield potential this growing season. But the combination of an expanded global market, continued weakness in the U.S. dollar and a smaller harvest is widely anticipated to lift tree nut prices in the marketing season ahead.

The price for taking winter delivery of natural gas is now trading at a seven-year high as global scarcity concerns and a more measured return to domestic production growth have fueled early buying. The market appears to be concerned that the demand for U.S. natural gas exports is so strong that there may be little flexibility in meeting domestic demand, should another cold winter unfold. Exports have risen significantly, with the U.S. now exporting about 10% of its dry gas production, a 30% increase compared to year ago levels.

The country’s largest reservoirs in the West have tipped to crisis, threatening the region’s water supply and hydropower generation. In August, the federal government declared a water shortage on the Colorado River for the first time, triggering mandatory water consumption cuts for the Southwest states. Unfortunately, a recent report by the National Oceanic and Atmospheric Administration foresees little relief on the horizon for the region. With scarcity proving to be the mother of invention, the West will likely come up with innovative ways to conserve water in the year ahead, identifying longer-term solutions for improved resiliency.

Momentum is growing in Washington to reform the Universal Services Fund (USF) in an effort to bridge the digital divide. Currently, the USF does not offer a large enough revenue base to fund future broadband programs that are needed to ensure broadband is available in unserved rural areas.

CoBank is a $158 billion cooperative bank serving vital industries across rural America. The bank provides loans, leases, export financing and other financial services to agribusinesses and rural power, water and communications providers in all 50 states. The bank also provides wholesale loans and other financial services to affiliated Farm Credit associations serving more than 75,000 farmers, ranchers and other rural borrowers in 23 states around the country.

CoBank is a member of the Farm Credit System, a nationwide network of banks and retail lending associations chartered to support the borrowing needs of U.S. agriculture, rural infrastructure and rural communities. Headquartered outside Denver, Colorado, CoBank serves customers from regional banking centers across the U.S. and maintains an international representative office in Singapore.