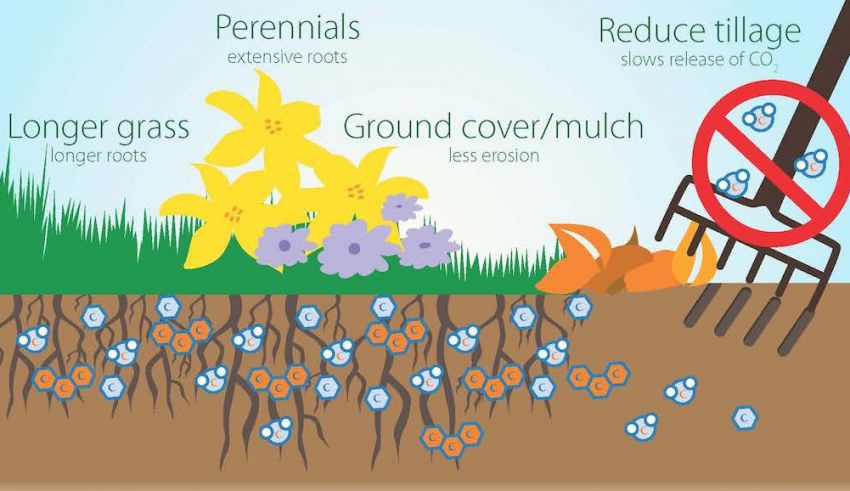 Actions you can take now to store carbon in your soil. Credit: SSSA staff

You may have heard a lot about soil carbon, “storing” carbon in soil, or “carbon markets.” So, let’s look at the relationship between soil and carbon in basic terms.

First, carbon. It’s the sixth element on the periodic chart. In nature, only two things are pure carbon: diamonds and graphite. However, carbon can interact with other elements to form compounds that are all around us every day.

One common carbon-containing compound that is frequently in the news is carbon dioxide. Carbon dioxide is the gas that humans breathe out, after we inhale air containing oxygen. It’s a natural product of our metabolism, it’s made by all other animals when they breathe, and it’s even made by some soil microbes during their metabolism.

Carbon dioxide is a natural compound in air, but with the advent of the industrial revolution, much more of the gas has been put into the air. Carbon dioxide is made by many manufacturing processes, and it is also produced when we use certain types of fuels – like coal and gas – for energy. The machines that produce items like appliances, cars, and all the things we buy are also responsible for pushing more carbon dioxide into the air.

In addition to being in the air, carbon compounds can be found in soil. One form of “soil carbon” is composed of carbon dioxide, which is found in abundance in the frozen ground of the tundra.

Another very important type of “soil carbon” is organic matter, which is made of decayed materials from living things like plants, animals and microbes. How does organic matter have carbon in it? The term “organic” in chemistry means chemical compounds that contain carbon (and usually hydrogen) along with other elements. Organic compounds are prevalent in nature, especially in living things. You may recall that plants “breathe in” carbon dioxide, and “breathe out” oxygen. Plants use the carbon dioxide to make new cells so stems, roots, and leaves can grow. The carbon part of carbon dioxide, and other elements like nitrogen and oxygen, are even used to make flowers, fruits, nuts, and vegetables.

A feature of healthy soil is a buildup of carbon in the form of organic matter, and even waste of earthworms, insects and other creatures that live in the soil. Even human bodies have organic carbon compounds in them! Humans are mostly made of hydrogen, oxygen, carbon, and nitrogen.

The carbon cycle: As plants grow and die, they leave behind sugars and carbohydrates (both contain carbon) in the soil. This is used by soil microbes and other soil life as a food source. This makes a wonderful carbon cycle, with plants pulling carbon from the air in the form of carbon dioxide and storing it in the soil as organic matter for other living things to use.

And, remember that frozen carbon trapped in the frozen tundra? As global warming continues, soil carbon is being lost at faster and faster speeds, as the frozen carbon dioxide thaws. In addition, increases in temperatures of the tundra also increase the activity of soil microbes. As they “eat” more organic matter, this stored carbon is lost.

Keeping as much carbon in soils as possible is important to life on earth. And scientists are researching ways to store more carbon in the soil in the form of organic matter. You can help keep more soil carbon in your yard! Follow these tips to help your plants and the environment. — By Susan Fisk, Soil Science Society of America and Matthew Polizzotto, University of Oregon