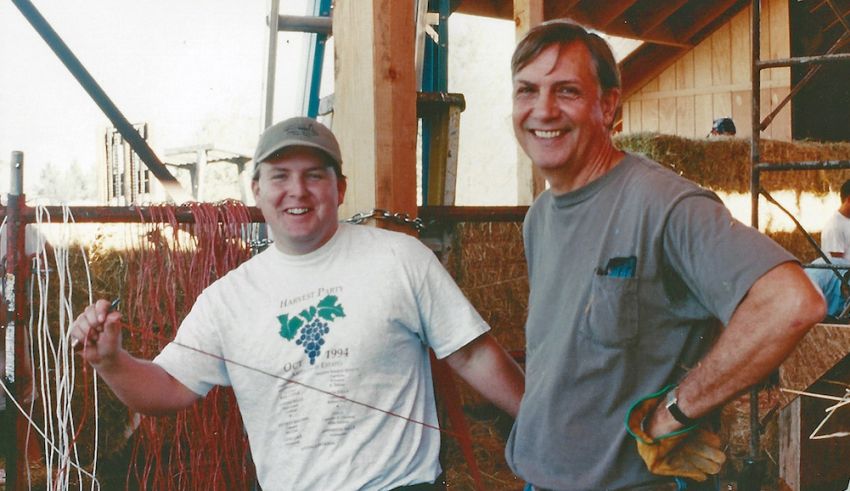 San Luis Obispo Coast Wine Collective — When you talk to early winery owners of the SLO Coast Wine region, there is a pioneering spirit that shines through along with a true do-it-yourself aesthetic. From humble beginnings to world class recognition, the SLO Coast wine region was trailblazed by a group of committed dreamers, farmers, and enthusiasts who all agree they could not have done it without the help of their community.

For Bill Greenough, owner of Saucelito Canyon, finding their property in 1974 was a journey through Oregon, Northern California, and Paso Robles that eventually led to a Zinfandel vineyard just outside of Arroyo Grande, planted in the 1880s by homesteaders Henry and Rosa Ditmas. Bill found the property that had yet to hit the market and was attracted to the unique location and climate of the property; coastal mountains that trapped the ocean breeze keeping the temperature of the vines low and allowing the fruit to retain acidity. He recalls spending the night on the property before purchasing, “I loved it. It really hit me in a spiritual way.”

The Greenoughs acknowledge that buying the property was a longshot and a gamble, and the lack of wine resources in the area presented quite a challenge. Bill spent hours poring over books to learn more about farming the vineyard and his wife Nancy fondly remembers what a big deal it was to get an education in wine, “All of the classes in those days were in Napa and there were extension classes at UC Davis,” she explains, “We would pile our kids into our VW van and head up to Davis to take classes. The van topped out at 55 miles per hour, so it was a haul for us!” In addition to a lack of educational resources, the Greenough’s mention the lack of equipment resources and having to wait weeks for supplies to arrive from Europe or make the voyage up to Napa for winemaking essentials.

Saucelito Canyon’s unique Zinfandel clone is now preserved in the UC Davis heritage vineyard thanks to Professor James Wolport. Even though it has been almost forty years since their first vintage (1982), Bill Greenough reflects on the area, “It’s really remarkable the history here… We were people willing to take chances physically, financially, and from a marketing perspective. The smaller wineries really retain the spirit of the early days. There’s a lot of camaraderie and pride.”

Clay Thompson’s journey to the area was also a nomadic quest to carve out a life for his family. He and his wife were academics who were bitten by the wine bug in the early 1980s, eventually making their way out to California where they fell in love with the Edna Valley. They promptly returned to their home state of Michigan, got married, tendered their resignations, and moved out West. Clay worked in the cellar at Edna Valley Winery learning the ropes and was eventually allowed to make his first vintage there. He eventually founded Claiborne & Churchill with his wife.

Thompson speaks fondly of his early years in the area and being part of a growing group of enthusiastic winemakers, “What impressed me the most is that the winemakers and everyone involved was willing to work really hard because we were proud of the products we were making. It was fun to go to work. We were few, but very mutually supportive of each other. No petty jealousy. If someone needed something, we were there the next day to help if a forklift broke down. Someone needed extra materials, things like that. We could and can still count on each other.”

The early days of the SLO Coast drew people seeking an undiscovered area and opportunity to be a part of something new and exciting. Jean-Pierre Wolff of Wolff Vineyards moved from the Bay Area to the Edna Valley thanks to several factors. The proximity to the ocean, cool climate grapes and an up-and-coming AVA spoke to him. He was also drawn to the adjacency to Cal Poly SLO and the culture of a college town.

Like many of those pioneering the area, Wolff revels in the camaraderie developed over the years as well as the “us against the world” attitude. For him, it was also facing the challenge of making a name locally for the wine industry in the area, “When I came, I was surprised how few local wines (Edna Valley) were on wine lists in restaurants. It was the exception not the rule. I remember thinking that does not make sense. You fast forward and you look at local restaurants and I would say that the grand majority have local wines on their list.”

Wolff credits this change in local attitudes to the small, but mighty group of vintners in the area that did the legwork in communities to get the word out, build relationships, and change the mindset that wine tasting was part of the tourism draw to the area. Soon directional signs were in place, area maps were ubiquitous in local lodging facilities. Wolff has noticed over the years the tourism draw is from around the state, country, and the world.

Brian Talley is a third-generation farmer in the area who knew the only way to get people to recognize the area was to get wine in their glasses. He started managing his family’s wine business, Talley Vineyards, in 1991 and spent much of his time traveling to San Francisco and Los Angeles doing tastings, “Just getting the wine in people’s glasses really moved the needle,” he recollects “People were willing to try something new.”

Talley beams when he talks about the area and how far it’s come and how unique the wines and people are, “What sets the SLO Coast wines apart is that we lean into this climate. This is one of the coolest growing regions in California. We are a welcoming, friendly community of wineries. The wines themselves are refreshing, have natural acidity, and energy.” This energy radiates through the wines, the people, and the land. While the area may have more wineries and notoriety, the spirit of its down-home origins remains.