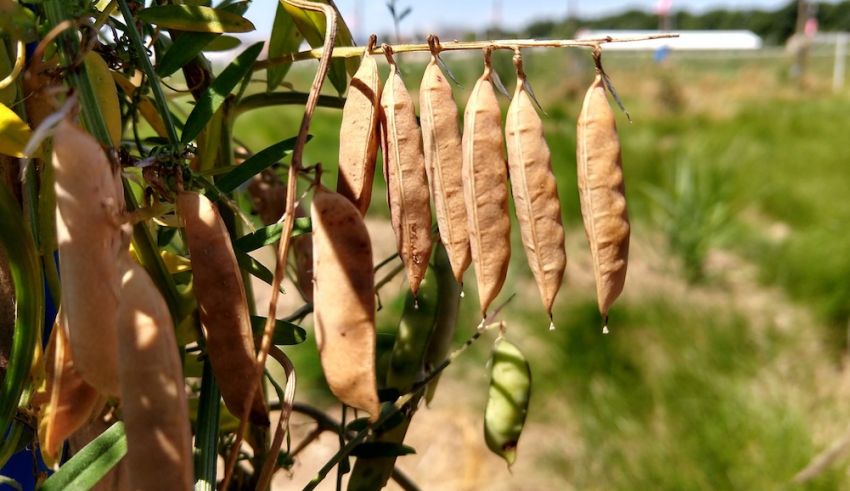 Hairy vetch ripe seeds, which were used in the study to display kinds of samples and measurements available to breeders (Photo by Sandra Wayman).

Both chemical fertilizers and cover crops can help build the nitrogen content in soil. But cover crops come with many other benefits, like improving soil structure and boosting beneficial microbes. Researchers at Cornell University are looking at ways to help breed better cover crops, also known as green manures, that could help farmers in their quest to grow crops in the most sustainable way. Their results were published in Crop Science, a publication of the Crop Science Society of America.

Katherine Muller and her team are working on strategies to measure nitrogen fixation in breeding programs for two common cover crops: crimson clover and hairy vetch. Both crops can pull nitrogen from the air to help them grow. This is called nitrogen fixation.

“Green manures are crops used to improve soil fertility,” says Muller. “They help the soil by adding nutrients. We look at legumes, which bring nitrogen into the soil due to their symbiotic relationship with bacteria.”

The use of legume green manures has been around for thousands of years. However, after the 1950s, chemical fertilizers became the main nitrogen source for farmers in developed countries. This is because two scientists, Haber and Bosch, found a way to pull nitrogen from the air, and make chemical fertilizer.

Though this type of fertilizer is productive, it also takes energy to make it – and it can easily slip into water bodies if not managed correctly.

“Cover crops are important ecological management tools,” says Muller. “They foster microbial communities and put nutrients in the soil. Essentially, they help build fertile soil that can supply nutrients when plants need them.”

The amount of nitrogen supplied by a legume cover crop depends on how well it grows and how much of its nitrogen comes from fixation versus uptake from soil. Currently, cover crop seeds available do not have selective breeding for nitrogen fixation – a valuable trait.

Plant breeders are working to develop cover crop varieties that reduce the risks and increase benefits to farmers. They hope that better varieties will increase the use of cover crops as an alternative to chemical fertilizer. Nitrogen fixation is one of their top priorities for legume green manures.

“We aim to help plant breeders develop strategies to target nitrogen fixation in cover crops,” explains Muller. “Because nitrogen fixation is a complicated trait that changes as plants grow, the timing of measurements is important.”

For farmers, the most important measurement of nitrogen fixation is when the crop is terminated. Legume green manures are usually terminated in the late flowering stage. Earlier termination means the crop is likely to resprout and become a weed. However, breeding programs for hairy vetch and crimson clover cannot take that measurement, as they need to remove the plant before cross-pollination.

“Our team did a field experiment with an active breeding program,” says Muller. “We collected plant tissues and measured nitrogen fixation. We were able to tell how much of the plant’s nitrogen comes from fixation versus the soil.”

The team tested three kinds of samples that a plant breeder may take to compare them to the sample most relevant to farmers. They then measured nitrogen fixation by sending their samples to a lab that measures total nitrogen content and the abundance of a naturally occurring stable isotope.

Nitrogen from soil usually has a higher abundance of the nitrogen stable isotope than nitrogen from fixation. This allows researchers to estimate the proportion of nitrogen a plant obtains from soil versus fixation.

According to Muller, if breeders are going to add one measurement, it should be this. The proportion of nitrogen obtained by fixation often does not correlate with plant size or other measurements.

“It is important to measure actual nitrogen fixed in the cover crop because it can vary,” says Muller. “Farmers want to know how much nitrogen they are bringing into their fields. We need to accurately measure and provide this information to help farmers make decisions. We hope our research will encourage more farmers to adopt legumes cover crops as a nitrogen source.”

Katherine Muller is a postdoctoral researcher at Cornell University. This research was done in conjunction with the Legume Cover Crop Breeding Project, funded by the United States Department of Agriculture.

American Society of Agronomy, Soil Science Society of America, Crop Science Society of America: Collectively, these Societies represent more than 12,000 individual members around the world. Members are researchers and professionals in the areas of growing our world’s food supply while protecting our environment. Together we work toward solutions to advance scientific knowledge in the areas of agronomy, crop science, and soil science.