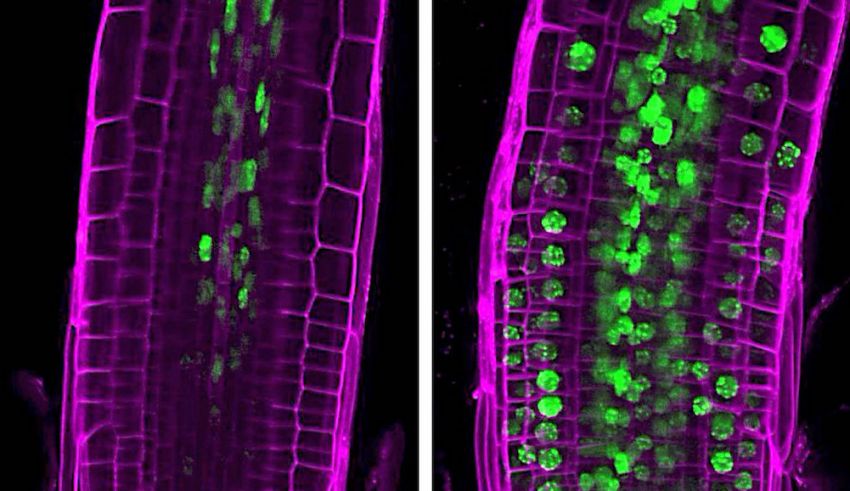 In an international research project, a research group at the Gregor Mendel Institute in Vienna has investigated how plants react to rising temperatures in terms of the two strategies essential for their survival: “growth” and “warding off disease”. Their studies show that heat triggers a broad immune response and stops growth. Awareness of these regulatory mechanisms is becoming increasingly important in the face of climate change.

All the 300,000 plant species on our planet are confronted with a dilemma: is it preferable to grow or to step up their defences? In order to survive, sessile organisms must coordinate the two strategies skilfully, given that their resources are limited. Both growth and the defence against pathogens cost a great deal of energy, which is why plants can only increase their investment in one if they lower it for the other. In addition, climate change will increase the average global temperature by up to four degrees by 2100. For a hungry humanity this hotter environment becomes a resource issue involving a range of aspects from suitable seeds to declining yields.

Youssef Belkhadir and his group at the Gregor Mendel Institute of Molecular Plant Biology (GMI) at the Austrian Academy of Sciences, in cooperation with Grégory Vert from the Plant Science Research Laboratory at the University of Toulouse (LRSV), have discovered how higher temperatures affect the ability of plants to grow and defend themselves. The project received funding from the Austrian Science Fund FWF and the French National Research Agency ANR.

For plants, rising temperatures translate into stress. Not only is there less water available to them, greater heat also engenders demonstrable changes in the composition, density and diversity of the microbes that threaten them. It is a known fact that plants do not grow as well when they have to defend themselves against microorganisms. Brassinosteroids (BRs) have been the subject of research for three decades. BRs are plant hormones that promote growth, but also act as a hub for other signalling pathways that affect stress factors and nutrients. In cooperation with Grégory Vert’s group in Toulouse, the researchers in Vienna have expanded the active research field of “grow-or-defend” to include temperature as a variable. As their model organism the researchers chose the well-researched thale cress (Arabidopsis thaliana).

The research groups exposed seedlings grown in a sterile setting to different situations and stresses under controlled conditions, and then studied the plant material with regard to biochemical, molecular, genome-related and cell biology-related aspects: “Brassinosteroids allow the cell to elongate. When BR is sprayed on, plants grow quickly. We were interested in other molecular agents that help plants decide where to direct their energy,” says principal investigator Belkhadir. This is what the international research teams discovered: if seedlings are kept at 24 to 26 degrees instead of at 21, their root system does not grow as well. “When you increase the temperature, the BR receptor is degraded. Even if there is a lot of steroid present, the plant can no longer ‘see’ the growth hormone,” Belkhadir explains.

The researchers have found further receptors that enable the plant to stop growing and, in return, to step up its defence system in a modulated way. In order to render microorganisms harmless, plants generally have two defence strategies. Pathogens on the cell surface are either recognised with an abundance of receptors and trigger a mild but broad immune reaction. In this case, defence substances from the plant’s metabolism reach the cell surface and act against various organisms. The second reaction involves triggering a strong immune response that causes the affected tissue to die. This is the case when receptors find foreign material inside the cell.

At higher temperatures, the team was able to demonstrate a strong activation of genes of the first defence strategy – even if the environment was still sterile. This is a sensible adaptation mechanism on the part of the plants, since they can expect an increased onslaught and a wide range of pathogens to be waiting outside the laboratory. The fact that root growth is halted at higher temperatures also fits into the scheme of a ramped-up defence against pathogens. Growth means that cell walls are initially thinner, and until they solidify again, pathogens find it easier to breach them. The research results show how, at high temperatures, plants make a choice between growth and defence and thus provide important foundations for biotechnological tools to develop seeds that are better equipped for global warming.

Youssef Belkhadir studied biochemistry and genomics in Paris and completed his PhD in molecular genetics at the Universities of Paris-Sud (Orsay, France) and North Carolina (Chapel Hill, USA). From 2006 to 2010, he conducted research at the SALK Institute for Biological Studies in La Jolla (USA). Since 2014, he has been group leader at the Gregor Mendel Institute of Molecular Plant Biology at the Austrian Academy of Sciences. He was previously the director of the Department of Plant Biotechnology of the Moroccan Foundation for Advanced Science and co-founder of Atlas Genomics in Casablanca. The international research project “Temperature-dependent growth and defence regulation” (2018-2022) is funded by the Austrian Science Fund FWF.