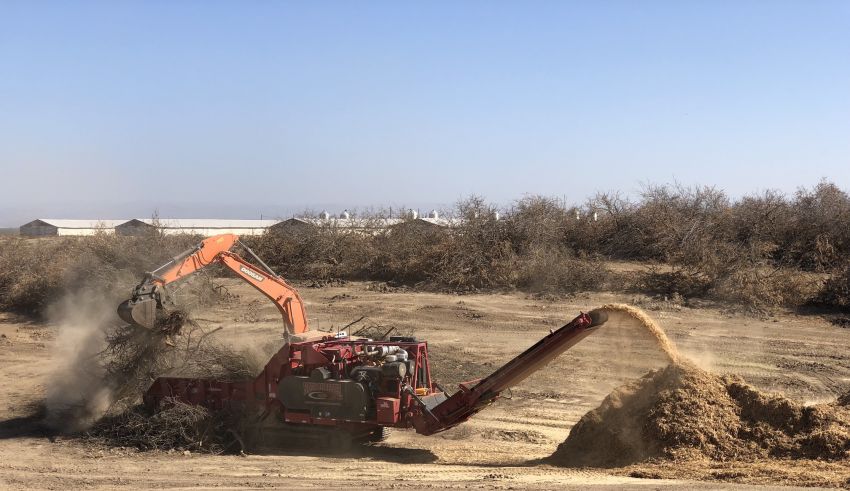 Image courtesy of the Almond Board of California

Almond Board of California — Exciting research shows that conducting Whole Orchard Recycling (WOR) in almonds can increase crop yields in subsequent orchards, provide long-term benefits to soil health (such as improved water retention and nutrient levels) and increase carbon sequestration.Conducted by researchers from the University of California (UC) Davis and UC Agricultural and Natural Resources, with funding in part by the Almond Board of California (ABC), this study identifies significant advantages to practicing WOR, the breadth of which are detailed in a report published in the journal PLOS ONE.The study spanned over a decade and compared plots within a nine-year-old orchard where WOR took place with plots where trees had been burned and their ashes tilled into the soil. At ninth leaf, researchers also tested the impact of deficit irrigation mid-growing season by reducing the amount of water applied by 20% for some of the trees.When the results were placed side-by-side, the plots where WOR took place consistently bested the plots where old trees’ ashes were tilled into the soil. Among other benefits, researchers discovered a:

“Almond growers have long been told that implementing practices to improve soil health will provide all these benefits, but until now there had been very little data demonstrating that a focus on feeding the soil with organic matter can make a meaningful difference in yield and crop quality,” said Gabriele Ludwig, Ph.D., director of Sustainability and Environmental Affairs for the Almond Board.Study shows significant yield increasesKey among the multiple positive outcomes discovered by this WOR study is the potential for increased yields. This finding not only brings good news for a grower’s bottom line, but it also has positive implications on the industry’s effort to produce “more crop per drop,” an effort it is striving to achieve as part of its Almond Orchard 2025 Goal to reduce the amount of water used to grow a pound of almonds by an additional 20%.“The increased water holding soil capacity that occurs as a result of Whole Orchard Recycling means that trees are subject to fewer extremes in terms of water availability, as more water is held in the upper layer of the soil where the majority of the tree’s roots are, and where tree uptake takes place,” Ludwig explained.Research shows that WOR increased water retention in the soil by up to 30%. While Ludwig cautioned that this data does not lend itself to a recommendation that growers can use less water if they practice WOR, it does indicate that applied water is used more efficiently by trees in orchards where WOR has occurred.Amélie Gaudin, Ph.D., an associate professor of agroecology in the UC Davis Department of Plant Sciences and a co-author of the WOR research report, said that by allowing more water to penetrate and the remain in the soil, WOR also reduces potential irrigation-related losses caused by runoff or evapotranspiration.“In plots where WOR occurred, water was more likely to reach and be used by the trees, allowing for increased yields as trees experienced less short-term stress and therefore achieved greater water use efficiency,” Ludwig said.A hedge against deficit-induced tree stressThis study also demonstrates that by increasing soil organic matter, WOR helps insulate orchards from negative impacts of deficit irrigation, which involves a delicate balance between stressing one’s trees just enough to prevent too much moisture and potential for disease in the orchards with not overstressing the trees to a point where their yields and overall health are compromised. According to the research, the deficit-irrigated trees in the WOR plots maintained higher stem water potential compared to the deficit-irrigated trees in the burn plots, indicating trees in the WOR plots were less water stressed.“We forget that trees can get stressed enough to shut down photosynthesis, whether that’s because they can’t keep up with water demand in the hot afternoons, for a day or two before irrigation, or during harvest,” Ludwig said. “So, when the upper layers of the soil can hold more water, the trees are better buffered from those stresses.” Gaudin said that by improving water holding capacity, WOR also helps orchards retain nitrogen, one of almond trees’ most necessary nutrients. This has positive implications for groundwater quality in areas where nitrogen leeching is a concern. It also may contribute to yield increases as trees in the WOR plots were shown to have greater access to nitrogen for longer periods of time.Another supplementary benefit, Ludwig noted, is that over time, as microorganisms in the soil break down the woody biomass, both macro- and micronutrients contained within the wood are released for reuse by the next generation of trees. This allows growers to “recycle” those nutrients so that they may be used throughout the lifetime of their newly planted orchard.Next steps for researchers working on this WOR research, Gaudin said, include further study of carbon sequestration and its implication for greenhouse gases, gaining a better understanding of nitrogen retention, optimizing WOR in different soil conditions and the impacts of integrating WOR with other responsible growing practices such as cover crops or anaerobic soil disinfestation.Support for those seeking to conduct WORGrowers may be eligible to receive incentive funding to conduct WOR if they apply for funds far enough in advance of conducting the practice.

For general questions about incentive programs, industry members may contact ABC’s Jesse Roseman at jroseman@almondboard.com.Those interested to learn more about how WOR may be practiced on their operation are encouraged to download or request a physical copy of the Whole Orchard Recycling Guide for California Almond Growers, created in partnership by ABC and UC ANR. Growers are also welcome to watch the Whole Orchard Recycling Overview and Whole Orchard Recycling – A Grower’s How-To videos, which are hosted on YouTube and found on ABC’s website. Finally, UC Davis provides a robust website dedicated to Whole Orchard Recycling, which offers a deep dive into the research findings, grower testimonials, and more. In addition to Gaudin, co-authors of the study include Kelsey Brewer and Emad Jahanzad of UC Davis; Brent Holtz, Sean Hogan and Cameron Zuber of UC Cooperative Extension; and David Doll, a former UC Cooperative Extension farm advisor.