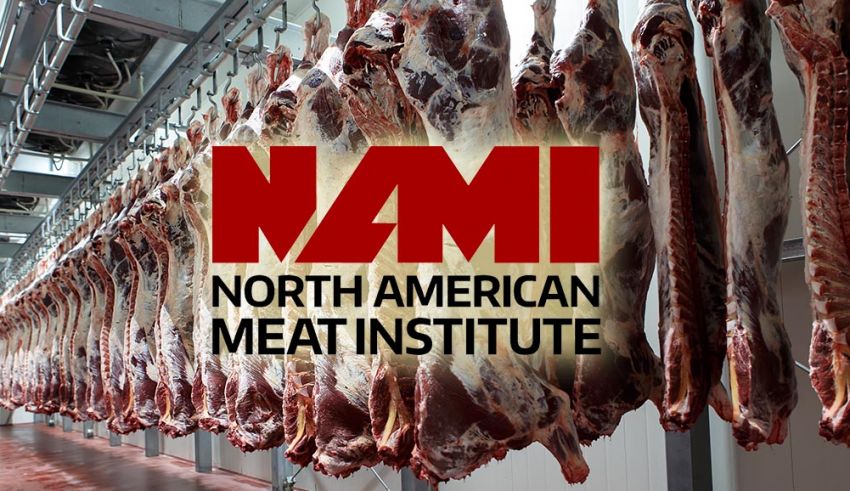 “The members of the Meat Institute and their livestock suppliers benefit from a fair and competitive market,” said Meat Institute Vice President of Communications Sarah Little. “This document uses public sources to give an accurate picture of the dynamic beef market, especially given the COVID pandemic.

“In July 2020, USDA analyzed the effects of the 2019 Holcomb facility fire and the pandemic, finding no wrong-doing and confirming the disruption in the beef markets was due to devastating and unprecedented events.

“Despite the pandemic’s challenges the market is competitive and growing.  Since October 2020, there have been several announcements of investments to build new packing facilities or expand capacity at existing plants that would increase cattle slaughter capacity by about four percent, including new independent, local, and regional packers.

“Meat and poultry companies are utilizing capacity to the best of their abilities with COVID protocol constraints still in place and despite significant labor challenges that existed prior to – and have been exacerbated by – COVID.  In fact, Saturday slaughter for the year was 51 percent above last year and 65 percent over 2019.

“Those calling for government intervention in the market never address labor. Labor is, and is likely to remain, a significant factor that affects utilization of production; and is also a factor that will challenge new small and medium sized facilities entering the market.

“The Meat Institute will continue to work with livestock producer organizations to ensure proposed changes to the beef markets do not have unintended consequences for producers and consumers.”

FACT: The top four beef packers in the U.S. account for the purchase and slaughter of about 85 percent of all fed cattle in the U.S., according to the most recent report from USDA’s Agricultural Marketing Service’s (AMS) Packer and Stockyards Division (P&S). Fed cattle, however, make up 79 percent of the Federally Inspected cattle slaughter in the U.S. The other 21 percent is made up of cows, both dairy and beef, and some bulls.

Thus, the “Big 4” beef packers, factoring in the non-fed slaughter plants they own, comprise about 70 percent of total U.S. beef production.

Fed cattle are steers and heifers that packers purchase from feedlots after being brought to market weight on a diet of grain to produce boxed beef, i.e. primarily the muscle cuts that consumers demand as steaks, ribs, and roasts. Cows and other non-fed cattle, on the other hand, are primarily slaughtered to be made into hamburger. The lean meat from these animals is a necessary ingredient to be made into America’s supply of hamburger produced in combination with the less demanded muscle cuts from the fed cattle.

Why is that important? About 50 percent of all beef in the U.S. is consumed as hamburger.

MYTH: There is no growth in the packing industry.

FACT: Despite the pandemic’s challenges the market is competitive and growing. Since last year there have been several announcements about building new packing facilities or expanding capacity at existing plants that would increase cattle slaughter capacity by more than four percent, including new independent, local, and regional packers.

Meat and poultry companies are utilizing capacity to the best of their abilities with COVID protocol constraints still in place and despite significant labor challenges that existed before – and have been exacerbated by – COVID. For example, Saturday slaughter as of May 22, 2021, for the year was 52 percent above last year and 67 percent over 2019 for the same period.

But labor is likely to remain a significant factor that affects utilization of production capacity; and is also a factor that will challenge new small and medium sized facilities entering the market. Brownfield News reports that Missouri Prime, one of the new smaller facilities to come online, is facing labor shortages, “Missouri Prime Beef started processing in March and is up to 150 head a day five days a week with a goal of 500 head a day in five years. But are looking for more cattle in addition to more workers. He says the labor shortage is largely why they are only operating five days a week.”

FACT: The beef packing industry has been and is one of the most highly scrutinized industries for antitrust issues. The packer concentration ratio in beef packing is monitored every year by the P&S. Not only does P&S monitor the industry, any potential merger or acquisition that regulators believe threatens “too much market power” that could “yield less competition” and be “ripe for market abuse” is subject to review by the Justice Department or the Federal Trade Commission.

FACT: The last proposed merger of two the “big four” was in 2008 – and it was blocked by the Department of Justice. In fact, the four-firm concentration ratio in fed cattle beef packing has not changed meaningfully in more than 25 years. 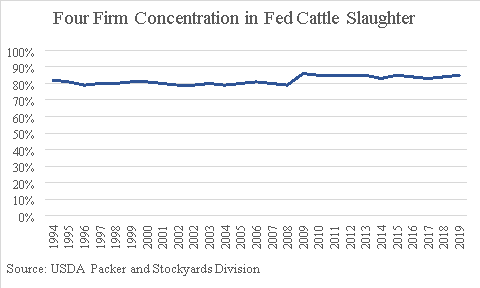 FACT: In July 2020, USDA analyzed the effects of the 2019 Holcomb facility fire and the pandemic, finding no wrong-doing and confirming the disruption in the beef markets was due to devastating and unprecedented events.

MYTH: Cattle prices are not being driven by the market.

FACT: Cattle prices are where they are because they follow supply and demand. 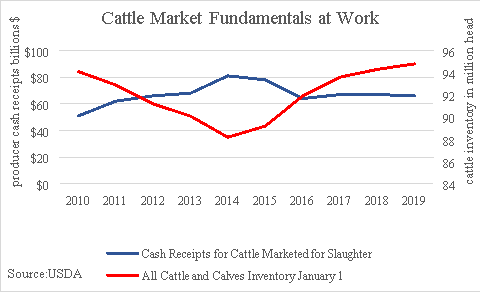 MYTH: Packers are able to control prices and defy expectations of market fundamentals.FACT: The cattle market works just as economists would have predicted given the current conditions: when supplies of cattle increase, prices decrease – and vice versa. The chart above is a text-book example of supply and demand fundamentals.

FACT: If packers are “able to control prices” why has that profitability not attracted more investors into the market?

Rabobank said this on that topic.

Several considerable hurdles must be addressed by both incumbents and new entrants …. First, the upfront cost of a new plant is extremely expensive … $USD 100 million to $120 million for every 1,000 head of daily capacity.

… the capital depth and longevity required to build and maintain a new plant through its first cattle cycle precludes most would-be investors from considering such a project.   … That’s not a recipe for thin capital or weak hearts.

FACT: The market suffered through COVID, and the effects are lingering, but Congress provided producers a safety net through CFAP to get through the impact of a once-in-a-century event. 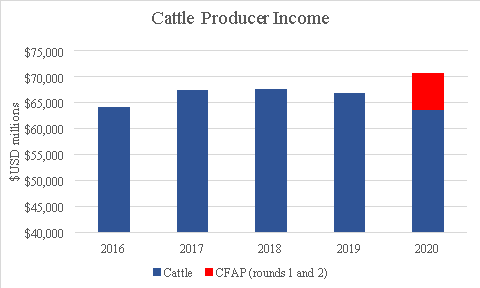 FACT: Forward contracts and formula-based sales provide an effective way for producers to hedge their risk and lock in prices. They also often pay premiums for quality. This allows packers and producers and feeders to predict needs in advance, which is a good thing.

In its 2018 report to Congress, AMS reported, “Stakeholders were in general agreement that formula-based purchases provide greater benefits, in terms of operational efficiency, for both packers and feedlots.”

FACT: From 2002 to 2019, according to USDA data compiled by economist and industry expert Dr. Nevil Speer, while the number of cattle sold on a cash market basis has declined 55 percent, beef grading at the top two quality grades – Choice and Prime – has increased 39 percent and consumer per capita expenditures on beef have increased 56 percent.

MYTH: Legalizing the sale of state inspected meat in interstate commerce has been thwarted, forcing local producers to bottleneck their beef processing at major U.S. meat packing facilities to get the federal stamp of approval.

FACT: Selling state inspected meat over state lines is a food safety issue — plain and simple, which is why multiple consumer advocacy groups have long opposed the concept. Moreover, USDA has a program that allows state inspected plants to ship product in interstate commerce, so long as the plants meet federal standards.

FACT: Additionally, Congress has provided $60 million to USDA to fund a program that will assist state-inspected plants become federally-inspected plants, which would give them the ability to market out of state and even internationally. Bottomline, there is no “thwarting” involved. The federal-inspection-is-a-barrier-for-small-plants argument is a red-herring.

FACT: There are more than 5,000 small federally inspected plants.

FACT: Most of the beef imported into the U.S. is lean, grass fed trim and lower value cuts, which go into processed meat and ground beef. Because of this balance, steaks, loins and higher value cuts are not forced into such lower value products. This balance from imports supports U.S. beef exports at higher values. According to the U.S. Meat Export Federation, the per pound price of U.S. beef exports has averaged a 68-cent premium over the price of imports that go into lower value beef products.

Myth: Cattle prices were higher when Mandatory Country of Origin Labeling (COOL) was in effect.

FACT: In four rulings, each of which the U.S. lost, the WTO concluded that COOL was discriminatory and illegal under WTO rules, and if left in place would have triggered $1 billion in retaliatory tariffs, which is why Congress repealed COOL for beef and pork in 2015.

Despite COOL being in place, the fastest, largest growth in beef imports was in 2014 – which was the year the size of the U.S. cattle herd was at its lowest, as would be expected based on supply and demand fundamentals.

MYTH: If beef markets are not reformed, consumers will pay more for lower quality beef.

FACT: Since 2010, beef quality has increased. The percent of beef grading at Choice or Prime has grown from 68 percent to about 85 percent, … cattle producers and meat companies are serving consumers well. This increase in quality has been driven by alternative marketing arrangements, which allow cattlemen to recover the value of their investments in genetics, feeding strategies, animal care, natural and other qualities desired by consumers.