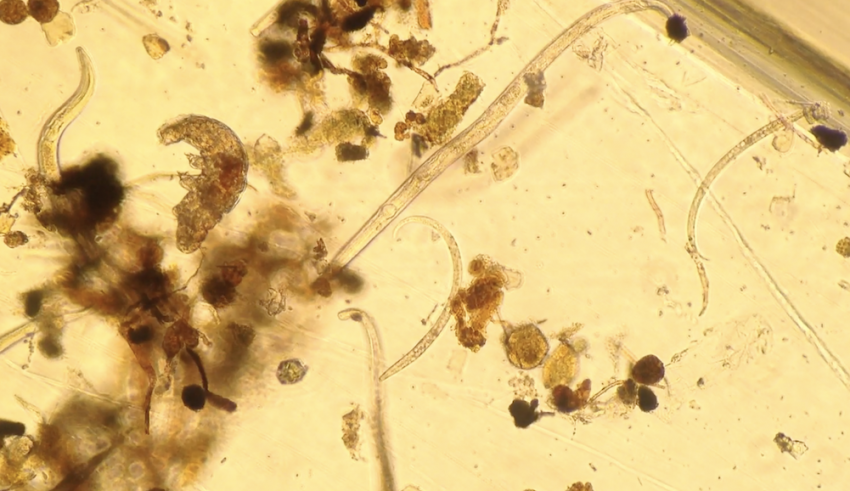 After collecting soil samples, Shaw and her research group inspect nematodes by extracting them into water and examining them in a dish using a microscope. Shown: a diverse grouping of nematodes (longer, worm-like structures) along with a tardigrade and some small soil debris that made it through the extraction process (Credit: Ashley Shaw).

Nematodes normally get a bad reputation. Yes, some of these miniscule creatures can cause harm in plants and animals. But little is known about the non-parasitic nematodes, which have many beneficial roles. Ashley Shaw from the University of Oregon explores this topic in this Soils Matter blog:

It might be hard to believe, but you may never have seen the most abundant animal on Earth: soil nematodes! They represent eighty percent of animal life by number and live in nearly every habitat. They are hard-working and important organisms.

Soil-dwelling nematodes, which I research, are tiny – usually between 1/500th to 1/20th of an inch! (But there is a nematode that lives inside sperm whales that is nearly thirty feet long.)

Indeed, some of the best-known nematodes are parasites. There are different nematode parasites of plants and animals. That means they live in or on the plant or animal, cannot survive without them, and sometimes kill their host (and then move on). But many more nematodes are free-living. In soils, nematodes live in water films that surround soil particles. Both plant root parasitic and free-living nematodes play an important role in plant health and plant feedback to soil carbon.

An incredible variety of soil nematodes exist at all levels of the soil food web. At the base of the food web, some feed on plants and algae, others graze on microbes (bacteria and fungi). At higher levels in the food web, nematodes that are predators and omnivores eat other invertebrates, protists, and even other nematodes. In some cases, “predatory” nematodes are the “good guys,” keeping populations of parasitic nematodes in check.

This food web is important to plant health and soil carbon storage. For example, by feeding on bacteria and fungi, microbial grazing nematodes help return nitrogen to the soil through their waste. This makes the nitrogen available again for plant use, improving plant growth.

Nematodes bring other species into the soil food web, too. Some bacteria survive the nematode gut and are deposited along with nematodes’ waste products. Still more hitch a ride on the outside of nematodes’ bodies. As nematodes move around in soil, they deposit bacteria in new places, spreading them around. The bacteria can contribute to and speed the process of decomposition, returning carbon to the soil for storage.

Plant parasitic nematodes attack roots using a piercing tool in their mouth. This “stylet” punctures plant cells so it can suck its carbon-rich juices. Some nematodes release chemicals that cause lesions or tumor-like growths on roots. They drain the plant’s strength above- and belowground.

In small populations, plant parasitic nematodes can stimulate root growth, but in high numbers they destroy roots, stunt aboveground growth, and cause disease. Lower plant growth (of both roots and shoots) leads to lower return of organic material to soil and eventually, lower soil carbon.

While the nematode species responsible for plant diseases have received a lot of attention, far less is known about the non-parasitic part of the soil nematode community, which plays mostly beneficial roles in soil. Ensuring a balance between beneficial and plant parasitic nematode groups is important for plant health and its contributions to soil carbon.

My current research is examining how active land management practices can help boost beneficial nematode groups in soil by improving soil habitat. We are studying compost additions to rangelands and whether they can improve soil carbon storage and plant growth.

Compost directly provides nutrients and increases soil water retention, improving plant growth. Compost is also changing the soil food web in ways not seen in some of the other treatments in our study plots. We think that the soil organic matter in the compost improves soil habitat for predators, supporting the long and complex soil food webs with abundant predatory nematodes that help keep root parasitic nematode populations in check. The result is that plant disease and root parasitism has declined, leading to greater plant growth and root carbon inputs under compost treatments, which benefits soil carbon storage.

Photo: After collecting soil samples, Shaw and her research group inspect nematodes by extracting them into water and examining them in a dish using a microscope. Shown: a diverse grouping of nematodes (longer, worm-like structures) along with a tardigrade and some small soil debris that made it through the extraction process. Credit: Ashley Shaw

The Soil Science Society of America (SSSA) is a progressive, international scientific society that fosters the transfer of knowledge and practices to sustain global soils. Based in Madison, WI, SSSA is the professional home for 6,000+ members dedicated to advancing the field of soil science. It provides information about soils in relation to crop production, environmental quality, ecosystem sustainability, bioremediation, waste management, recycling, and wise land use.

Follow SSSA on Facebook at SSSA.soils, and Twitter at SSSA_Soils. SSSA has soils information on www.soils.org/about-soils, for teachers at www.soils4teachers.org, and for students through 12th grade, www.soils4kids.org.