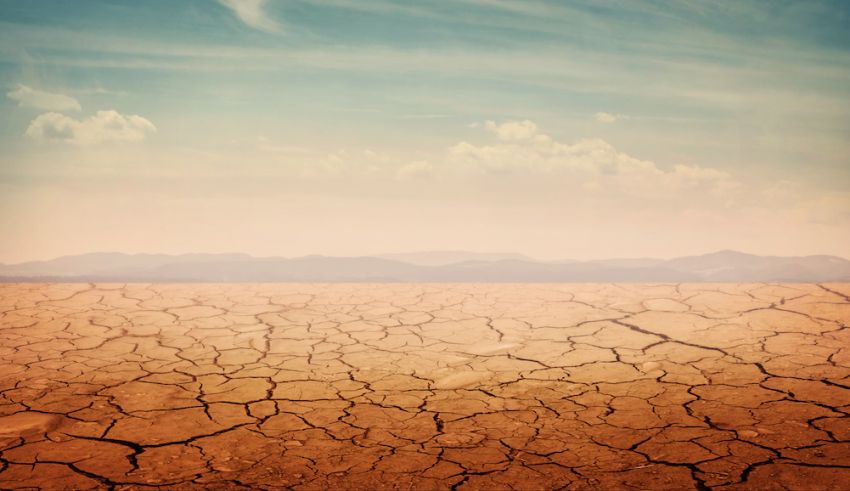 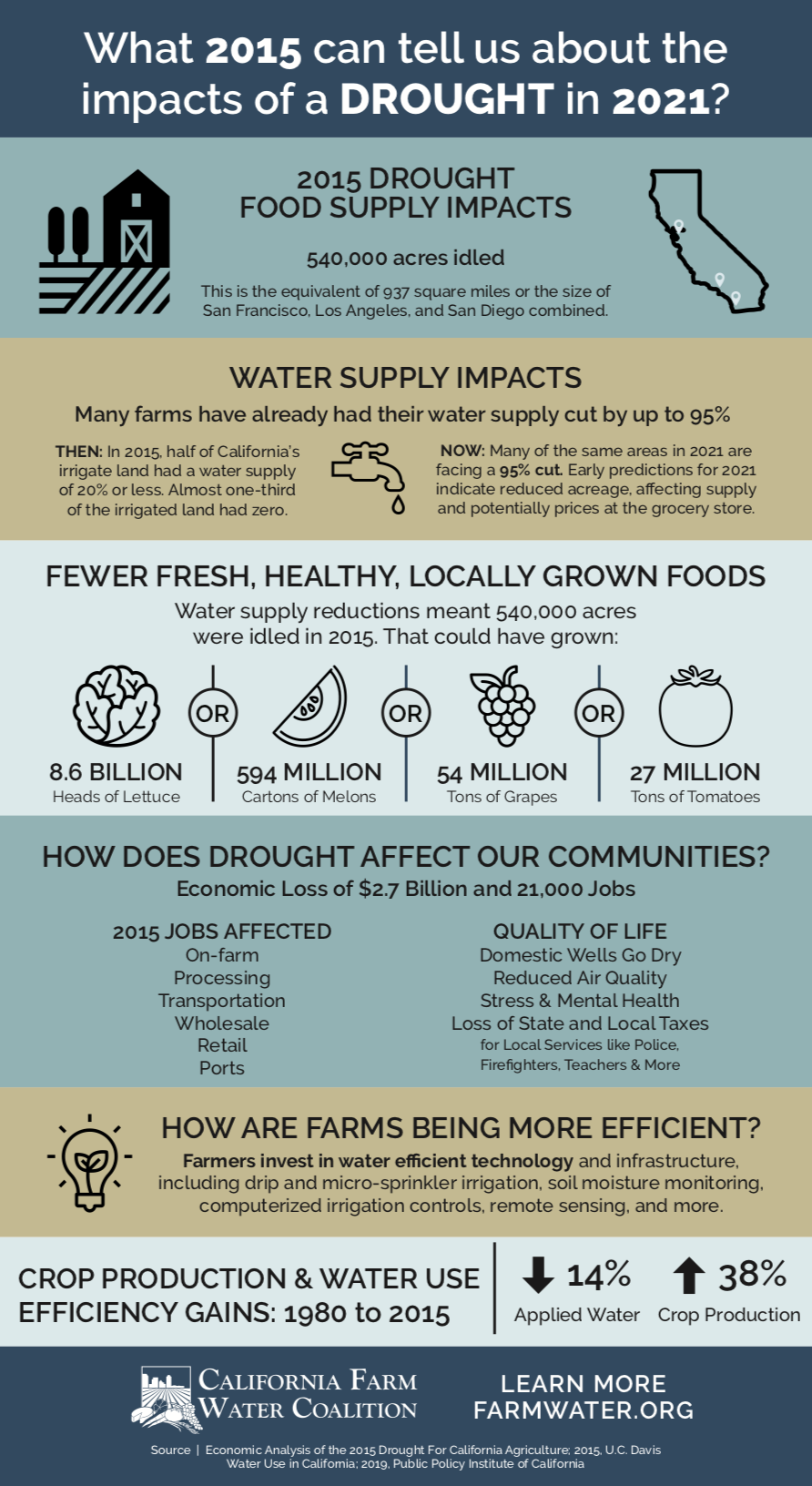 California Farm Water Coalition – Taking a look back at a similar water year can help us understand what might be in store for us through the rest of this year and possibly beyond.

California is in a critically dry year, the same as in 2015. Water will be extremely tight for thousands of farmers around the state, and many of them have already received notice that their water supplies are being cut by up to 95 percent.

In 2015, water supply cuts of that magnitude led to over half a million acres of land taken out of production. Had there been sufficient water supplies in 2015, the amount of land that was fallowed could have produced:

Instead, because no water was available, those fields produced nothing but weeds.

California is the No. 1 farm state in the nation with tens of thousands of agricultural jobs, with wages at all income levels covering all 58 counties. When farms aren’t growing food for people, it affects jobs, personal income, and their quality of life. In addition, farm-related jobs contribute hundreds of millions of dollars annually to state and local tax revenue which provide services local communities value, like police, firefighters and teachers. 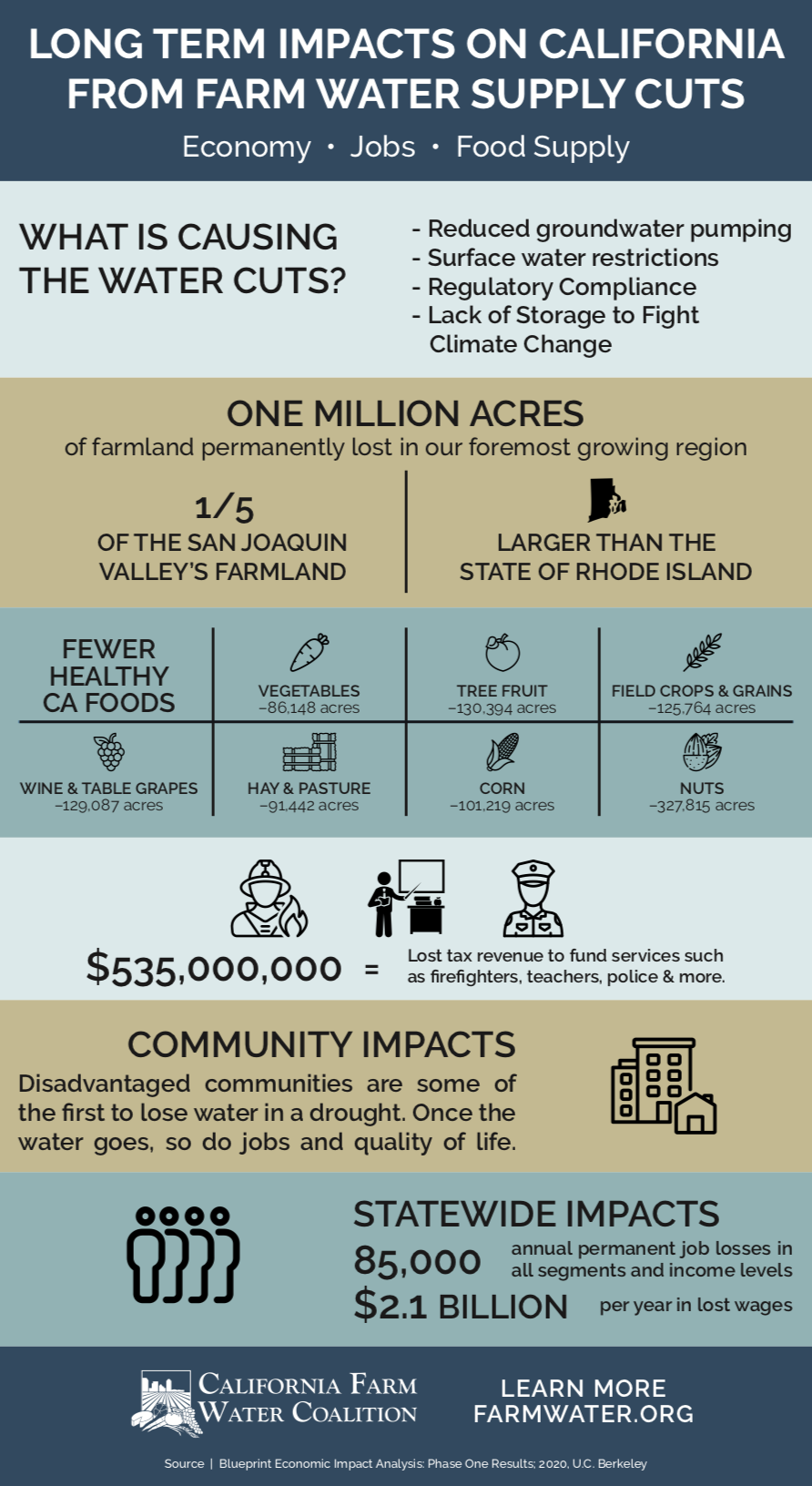 Farmers have been preparing for another drought and have invested heavily in water use efficiency projects, including drip and micro-sprinkler irrigation systems, soil moisture monitoring, and computerized irrigation controllers. But the savings achieved by those investments haven’t been enough to avoid wide-scale land fallowing due to the massive water supply shortages farmers are experiencing again this year.

Looking long-term, continuing water shortages will have a devastating effect not only on California farms but also on the farm related jobs throughout our economy.

The Blueprint Economic Impact Report, available HERE, indicates that over the next 30 years, water supply cuts will lead to the permanent loss of 1 million acres of productive farmland.

Fewer healthy foods will be available from California farms. The report estimates that California will permanently lose:

These reductions translate into the permanent loss of 85,000 jobs, half of which are off the farm, such as food processing, transportation, wholesale, retail, and ports. They also mean the permanent loss of over $535 million in tax revenue which, again, is used to provide the services local communities value, like police, firefighters and teachers.