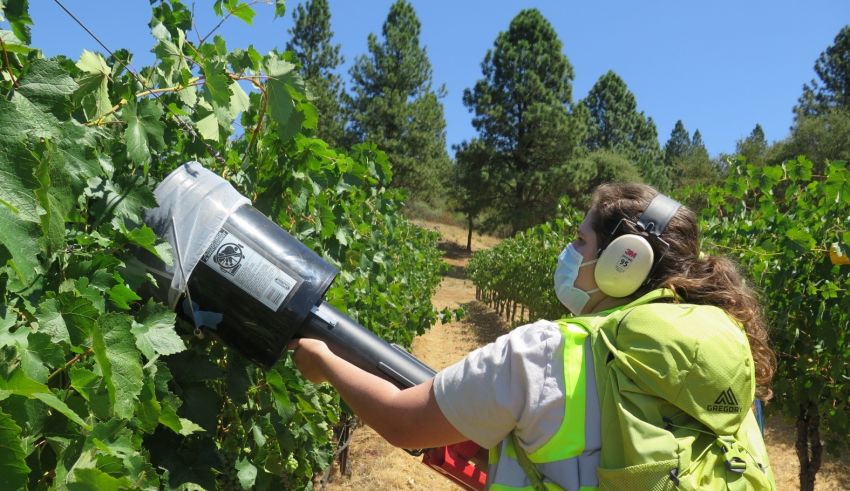 Entomologists have a unique toolbox of gadgets designed to trap and collect otherwise hard to nab insects.  Beating, sweeping, sucking, and carefully brushing, these scientists have no lack of creativity when it comes to collecting what most people can’t even see.  Yet these collections are critical keys to unravel the mystery of crop-threatening disease, where insects often play the role of “vectoring”, or spreading, the pathogen.   Enter the “D-Vac”, a modified leafblower designed to suck up insects from otherwise hard to get to places-like grapevine canopies!  Recently I joined Kelsey McCalla, Post-doctoral researcher, and Kristen Flores, Lab manager and Junior Specialist, both hailing from UC Specialist Kent Daane’s lab in Berkeley, on the hunt in the foothills for clues to the insect vectors responsible for transmitting Grapevine red blotch associated virus (GRBaV).  I’m so happy to have engaged the Daane lab to include our foothill region in the nationwide collaborative research to understand the spread of this disease.  The research is critical to managing it.

GRBaV, or simply “red blotch”, the DNA virus identified in 2011 causing disease in grapes that was a mystery for so long, continues to vex the research community.  While tremendous progress has been made on understanding the effect of the disease on delaying grape berry ripening and physiology, we still have not confirmed a vector or vectors, as it may be, responsible for the spread of this disease evident in so many of our vineyards. Awhile back you may remember my post about the exciting discovery by Bahder, Zalom and Sudarshana that the three-cornered alfalfa treehopper was a red blotch vector.  Oddly enough, that greenhouse study has not yet been replicated by other researchers seeking to duplicate, and confirm, the treehopper as a red blotch vector.

The Daane lab joins Houston Wilson and other researchers on a nationwide search to confirm the three cornered alfalfa treehopper as a red blotch vector and/or identify other insects that are spreading the disease.  Part of that work includes sampling for suspect insects using the D-vac and yellow sticky traps in vineyards where red blotch spread is evident.  The trap count information is used to understand the life cycles of these potential vectors.  Wilson, who was one of several speakers covering red blotch research progress during my 2020 Foothill Grape Day, recently published a newsletter on his work of the seasonal ecology of the treehopper in North Coast vineyards.  Our foothill monitoring will help us understand if the insect’s life cycle is similar here as compared to what is known to occur in the cooler N. Coast.

And no, those vineyard fall colors are not a good thing!  This is the time of the year when GRBaV symptoms become evident in red varieties in the vineyard-the characteristic red “blotches” on the leaves for which the disease is named begin to show in summer and become more visible as harvest nears and the season progresses. (Note: the disease affects both white and red varieties. In whites, the “blotches” are yellow and more difficult to see).  While diseased vineyards turn red, healthy vines remain green, then gold, in fall.

Thanks to the hard work of those like McCalla and Flores, even during this time of the pandemic (and wearing masks while working outdoors in summer heat is not fun, let me tell you), we will get closer to solving the red blotch mystery. — By Lynn Wunderlich, UC Cooperative Extension Farm Advisor