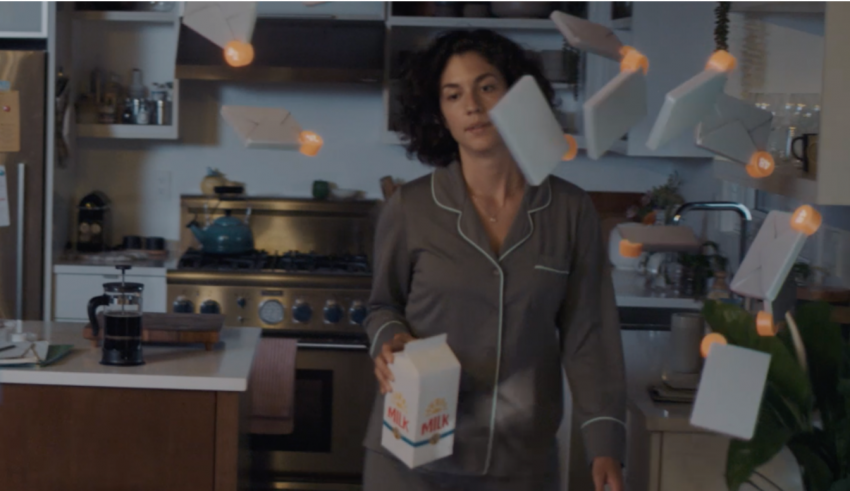 The contrast between the pull of distractions that start in the early mornings with the satisfying and calming elements of enjoying California dairy for breakfast are brought to life in two new creative explorations in the California Milk Advisory Board’s (CMAB) Enter the Golden State campaign debuting this week. The :30 Day Can Wait segments – titled Video Conference and Emails – focus on the importance of taking a moment with family for breakfast, with California dairy, before the hustle, bustle (and technology) of the day begins.
Produced by Deutsch LA, the spots graphically showcase the digital distractions that often start in the early mornings, from email notifications to ringing phones and video calls, compared with the satisfying and calming elements of enjoying California dairy for breakfast.
“Despite breakfast being the most important meal of the day, it often gets lost in the rush of morning and all of our pending commitments. With more people working remotely, recent findings showcase that breakfast is back. With dairy at the heart of many breakfast items, Real California Milk continues to help families make mornings mean more with California milk and dairy foods,” said John Talbot, CEO of the CMAB.
The ads, which debuted this week on digital and social, will roll out on regional television in November.  They are part of an overall focus on the value of California dairy at breakfast that kicked off during June Dairy Month with the #MorningsMeanMore social media campaign where family and lifestyle influencers posted content showcasing the positive aspects of stay-at-home orders, including time in the mornings to spend breakfast together.
During August and September, a back-to-school “Mornings Mean More” retail flashpoint was conducted with fluid milk in the spotlight. The California promotion included digital and in-store value offers, elevated product placement and promotion on key e-commerce and retailer websites, and targeted email communication for shoppers at Walmart, Smart & Final, Ralphs, Food 4 Less and Foods co. A “Holiday Mornings Mean More” retail flashpoint and social campaign in November/December will bring the message home with families celebrating time together and special family recipes at breakfast.
California is the nation’s leading milk producer. It also produces more butter, ice cream and nonfat dry milk than any other state. The state is the second-largest producer of cheese and yogurt. California milk and dairy foods can be identified by the Real California Milk seal, which certifies they are made exclusively with milk from the state’s dairy farm families.

About Real California Milk/California Milk Advisory Board
The California Milk Advisory Board (CMAB), an instrumentality of the California Department of Food and Agriculture, is funded by the state’s dairy farm families who lead the nation in sustainable dairy farming practices. With a vision to nourish the world with the wholesome goodness of Real California Milk, the CMAB’s programs focus on increasing demand for California’s sustainable dairy products in the state, across the U.S. and around the world through advertising, public relations, research, and retail and foodservice promotional programs. For more information and to connect with the CMAB, visit RealCaliforniaMilk.com, Facebook, YouTube, Twitter, Instagram and Pinterest.
Click To Comment