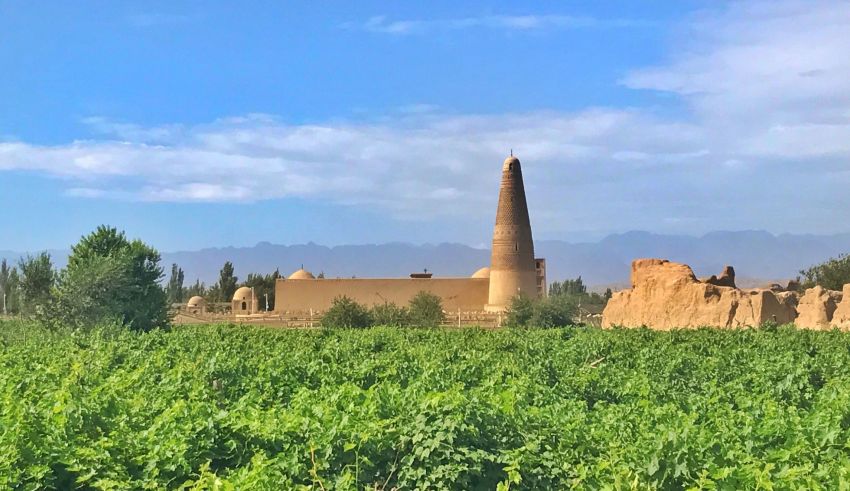 Turpan, the raisin capital of China

China’s raisin production is forecast at 160,000 MT in MY 2020/21, down 20 percent from the previous year as the Covid-19 outbreak in the country’s major producing area has delayed raisin processing. As a result, China’s raisin export forecast is reduced sharply from the previous year to 20,000 MT on reduced exportable supplies. The raisin import forecast is expected to increase over the previous marketing year by nearly 20 percent to 37,000 MT given the shortage of local supplies and recovering demand.

China’s raisin production is forecast at 160,000 metric tons (MT) in marketing year (MY) 2020/21 (August-July), down 20 percent from the previous year. The quarantine measures against Covid-19 have delayed raisin processing indefinitely in the Turpan area of Xinjiang, the single largest raisin producing region in China. The Xinjiang government is enforcing a quarantine lockdown across the whole province following an outbreak of Covid-19 in Urumqi, the capital of Xinjiang, in mid-July. As a result, many farming activities, including grape harvest, are suspended, according to local area sources in Turpan. 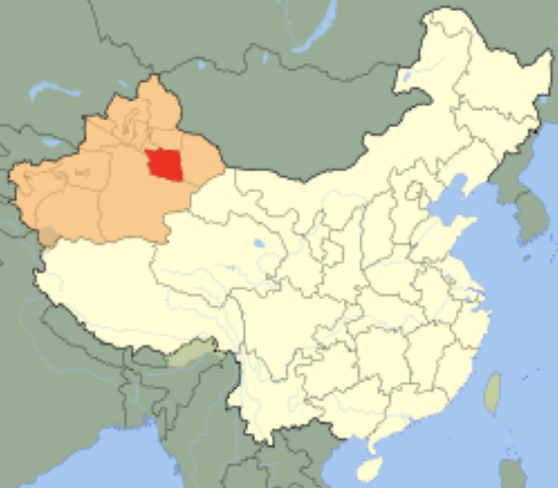 The raisin processing season normally begins in mid-August and ends in late September or early October. Although the processing volume is relatively small at the beginning of the marketing year, if the quarantine measures persist, raisin production may be seriously affected. Turpan produces more than 80 percent of the country’s raisins (Turpan is shown in red below and Xinjiang is shown in orange).

Turpan produces mainly green raisins that are wind-dried in special drying houses by local farmers. Currently, green raisins, which are traditionally consumed as snacks, account for nearly 60 percent of the total market share. China is the world single largest producer of green raisins and the country’s raisin exports mostly fall in this category. Companies also process dark raisins in Turpan with sun- drying yards. The market share of dark raisins, which are mainly used as food ingredients, has reached around 40 percent in recent years.

More than 90 percent of the grapes grown in Turpan belong to Thompson Seedless varieties that can be used for both raisin processing and fresh consumption. In MY2020/21, Turpan is expecting a good harvest of fresh grapes under favorable growing conditions. Normally, around 70 percent of the fresh grapes are processed into raisins and approximately five kilos of fresh grapes make one kilo of raisins.

Raisin wholesale prices for MY2020/21 are not available as processing activities have not started. With the anticipated sharp decline in production, raisin prices are expected to increase from the previous marketing year. At the beginning of MY 2019/20, the wholesale prices for green raisins were quoted at RMB 24 (U.S. $3.50) per kilo in Turpan and dark raisins were sold at RMB 17 (U.S. $2.50) per kilo.

The outbreak of Covid-19 in early 2020 has seriously impacted the consumption of raisins in China due to the closure of stores, disruption of logistics, and the limited use of gift baskets during the Chinese New Year. Although online snack food sales maintained moderate growth, consumption is focused more on meal substitutes such as instant food, bread, and cookies.

With the effective control of Covid-19 and resumption of economic activities, raisin consumption is expected to recover gradually. Additionally, consumers will probably pay more attention to food safety and product brands. The consumption growth of raisins is dependent on development of new products and innovation of marketing strategies by major food producers.

Raisins are used primarily in food processing as an ingredient or consumed directly as snacks. The rapid development of the snack food industry and the bakery sector has driven raisin consumption. The snack food industry had experienced an average growth of 6.7 percent during 2013-2019 and was predicted to maintain an annual growth rate of more than 6 percent in years to come, according to an industry report.

The import forecast of raisins into China is 37,000 MT in MY 2020/21, an increase of nearly 20 percent from Post’s revised estimate of MY 2019/20 imports. Local importers and food processors are expected to increase their purchases from the world market given the sharp decline in Xinjiang raisin production. Uzbekistan remains China’s largest raisin supplier with a 65-percent market share in MY 2019/20. Chile passed the United States as the second largest raisin supplier. Raisin imports from the United States have not improved despite a tariff exclusion process that partially exempts the retaliatory tariffs imposed on U.S. origin products since the beginning of March 2020. The MY 2019/20 raisin import estimate is 31,000 MT. 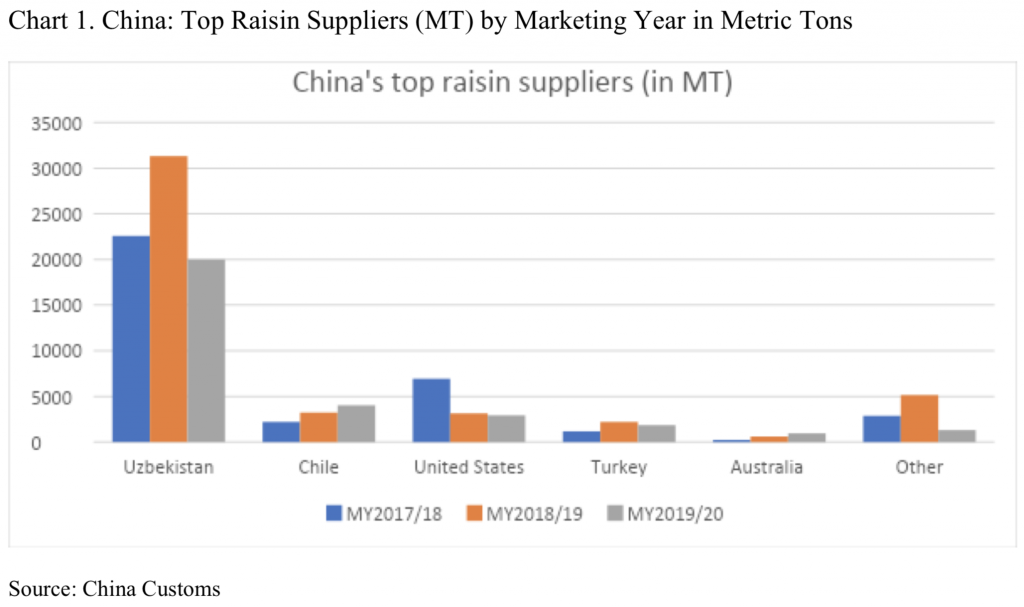 China’s raisin import shipments are concentrated in October-December (see chart below). During these months importers stock up in preparation for Chinese New Year celebrations and gifts. 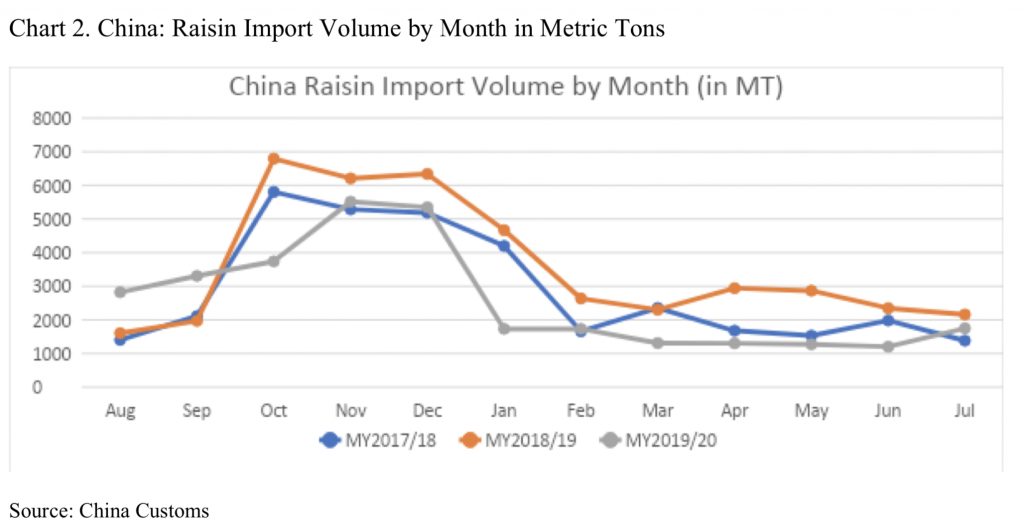 China’s raisin exports are forecast to decrease by 45 percent to 20,000 MT in MY 2020/21 from the revised number in the previous marketing year. The anticipated decline in local raisin production will reduce the exportable supplies. In addition, the world demand for raisins is likely to remain weak in the wake of the global Covid-19 outbreak. Leading export markets for Chinese raisins are the EU countries and Japan. The month-on-month data below highlights continued weakened exports. The MY 2019/20 export estimate was revised up in accordance with official customs data. 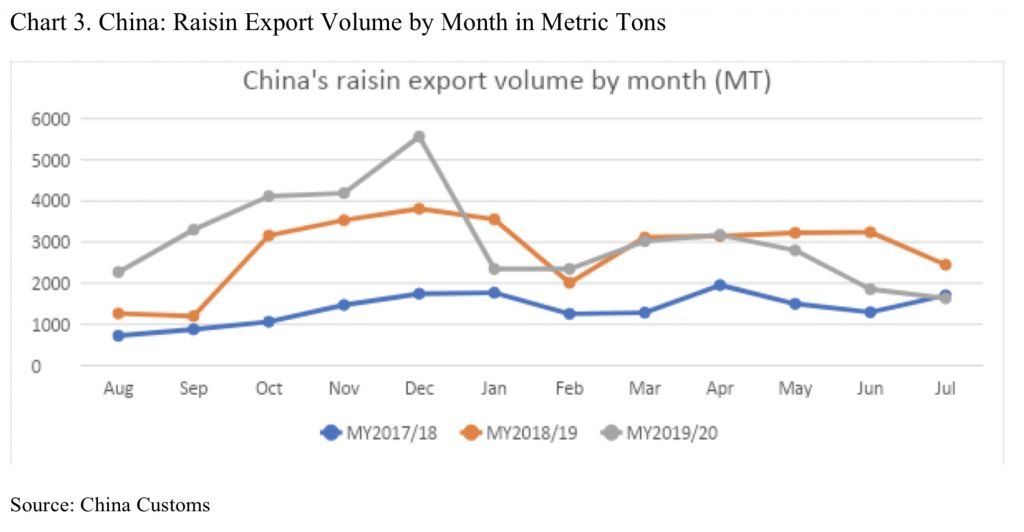 The State Council Tariff Commission (SCTC) announced that retaliatory tariffs imposed on U.S. agricultural products would be lowered as of February 14, 2020. As a result, the collected tariff on U.S. raisins became 55 percent, down from the previous 60 percent (see GAIN report CH2020-0016). In addition, SCTC launched a tariff exclusion process on March 2, 2020, focusing on individual importers who could apply for tariff exclusions on specific consignments of U.S. products. These exclusions exempted only the retaliatory Section 301-tariffs for the products and are valid for one year (refer to GAIN report CH2020-0017). If an exclusion application is successfully approved, import tariff for U.S. raisins would be cut to 25 percent. 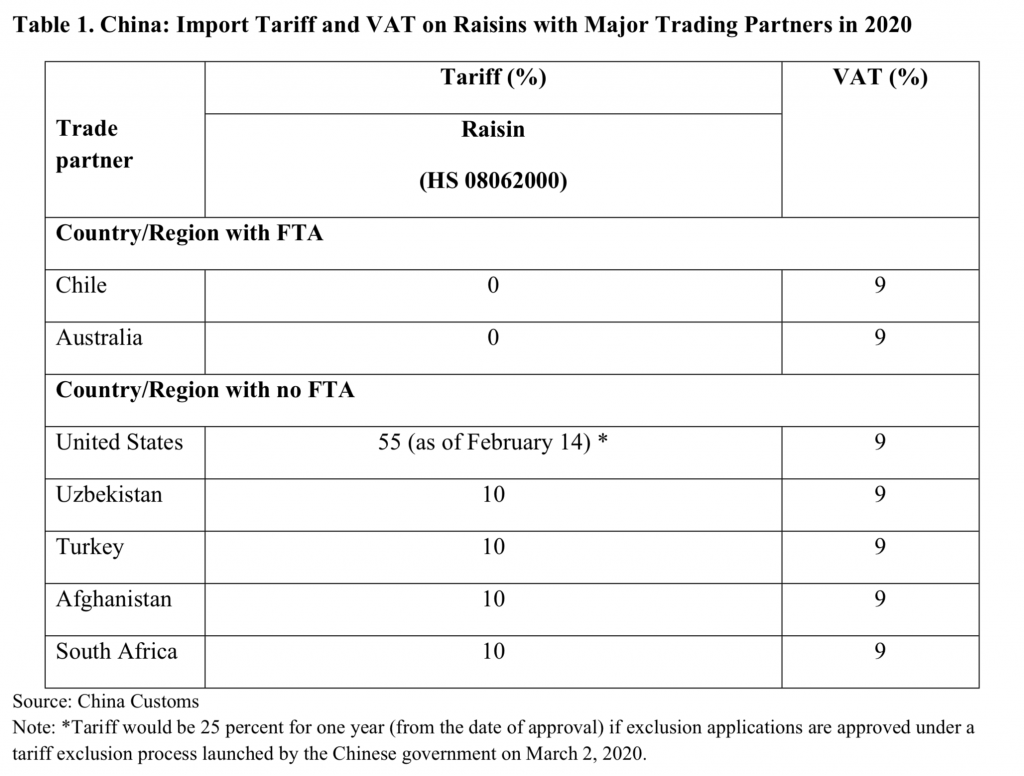 U.S. raisins remain important for China’s snack food and baking sectors. However, consumer demand has been impacted by the Covid-19 pandemic, particularly in the HRI sector where many U.S. raisins are used. Slow consumption by the HRI section and overstocking of inventory led to delays for new orders. Supply chain disruptions during the pandemic also impacted sales.

The e-commerce channel continues to grow rapidly in China. In the first quarter of 2020, online retail food consumption grew 32.7 percent compared to the previous year, according to the China Statistic Bureau. This period coincided with some of the strictest Covid-19 measures in China. Consumers who switched to e-commerce sourcing during Covid-19 are likely to continue online purchases after experiencing consistent quality and increased ease from these platforms. This e-commerce trend is expected to continue across first, second and third-tier cities.

About 30 percent of U.S. raisins are distributed through various e-commerce platforms. Some U.S. raisin brands have established their flagship stores on Taobao or JD.com to supply Chinese consumers.

In 2020, the U.S. Department of Agriculture’s Agricultural Trade Offices across China worked with the Raisin Administrative Committee (RAC) to support in-person events showcasing U.S. raisins as ingredients in baked goods at retail chains. Raisins remain the most frequently used and popular dried fruit ingredient in the quickly expanding baking industry because of their familiar flavor and sweet taste. Consumer demand for baked goods and the sector’s expansion has helped push U.S. raisins into second- and third-tier cities. As home baking becomes a greater trend, the RAC is supporting online marketing initiatives that increase Chinese home bakers awareness of raisin uses in their recipes. — By the USDA Foreign Agricultural Service 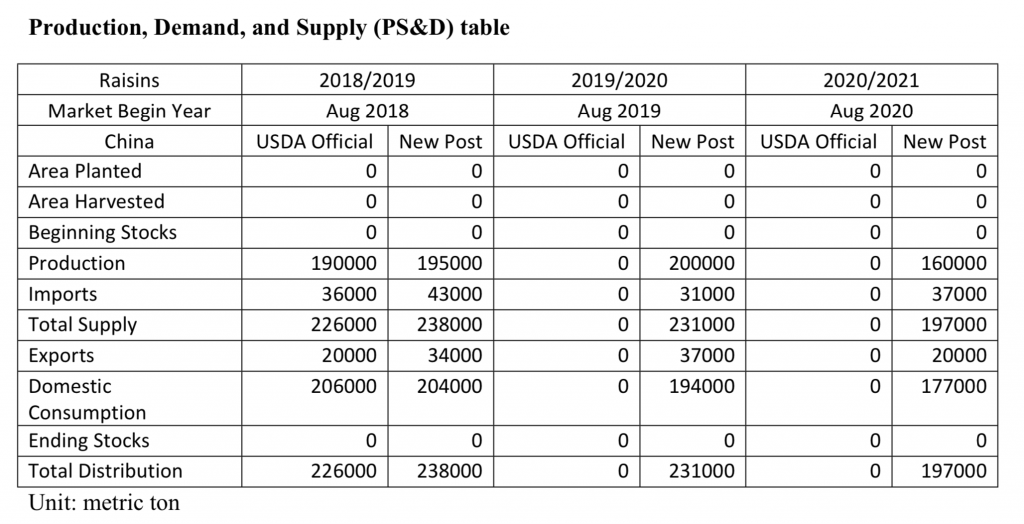