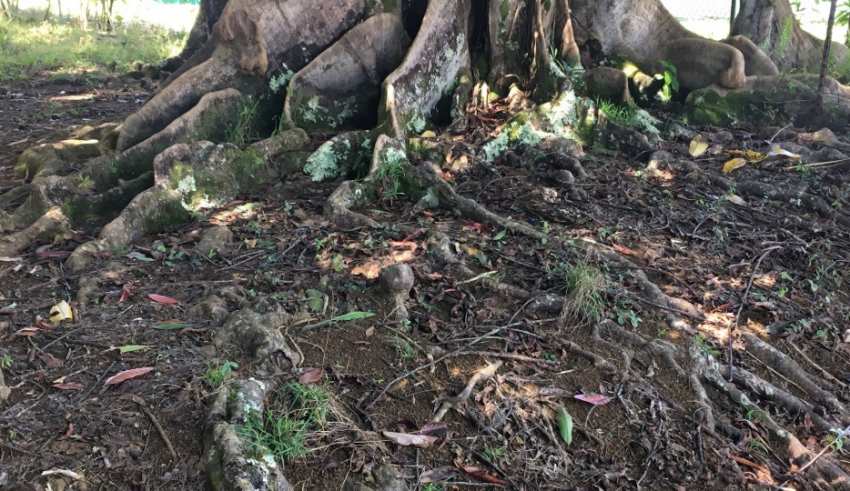 This is not good. You find an avocado tree with sun blotch or it is time to thin the orchard and you remove the offending tree. You know that if you don’t remove the sucker, you’ll end up with some rootstock growth that just gets in the way of the other trees. Avocado suckers can look like a valued tree until it’s time for harvest several years later, and then you are likely to find that it’s not the variety that you thought it was. Homeowners often find this problem several years after a freeze and the lemon tree that regrew from the freeze damage turns out to be the rootstock variety and produces some gnarly, seedy, juiceless fruit. Even without a frost, sometimes rootstocks which are selected for their vigor, can be more vigorous than the scion variety and will overgrow it. You then end up with whatever the rootstock fruit turns out to be. 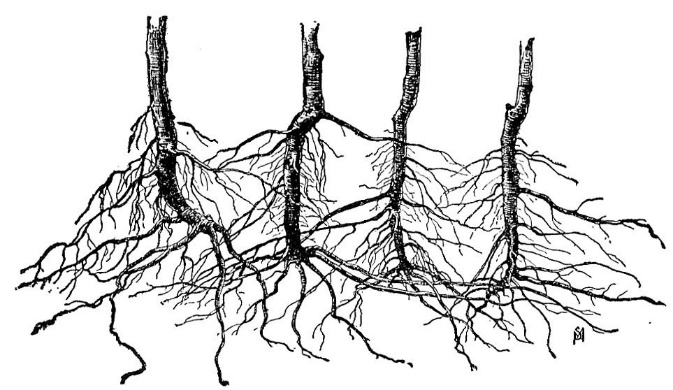 In some situations, it is legal and common to use a “cut stump” treatment to kill stumps and prevent resprouting. In these cases, glyphosate or triclopyr is sprayed, drizzled, or painted onto a freshly cut stump. Relatively high concentrations of the herbicide are applied to the cambium, which is the living tissue just under the bark. Cut stump treatments work well in many situations, including citrus orchards. This type of cut and spray treatment is commonly done to remove undesirable plants, like arundo and weedy tree species. However, in some trees, like avocado and many forest species, there can be root grafting, which are tree-to-tree root connections.

Due to root grafting in a mature avocado orchard, it really can be one giant root system, one tree connected to all the other trees. And if a systemic herbicide is injected in one tree, the surrounding trees can be affected – they might get enough herbicide through the root graft to be injured or even killed along with the target tree. This technique has been used in Florida to remove Laurel Wilt Disease infected avocado trees which can rapidly infect surrounding trees with the killer fungus. This is a helpful technique, because it removes any doubt that all infected trees have been killed to prevent the spread to healthy trees in the orchard.

In a healthy orchard in California, this is not a really good way to remove avocado stump sprouts. Every year reports come in of glyphosate killing good trees that surround a removed tree. Figure 3 is a recent case where the stump (circled in blue) was scored and painted with glyphosate. Within two weeks the surrounding tree were also killed. The systemic material was translocated from the cut surface by way of root grafts to the neighboring trees. And those trees are now dead, too.

So what to do? One thing done by those with a front-end loader or a backhoe, is to pull the stump and have an end to the sucker problem. It also reduces the possibility of chronic armillaria fungus persisting to infect trees. The problem is that it leaves a big hole to deal with which can open up a slope to erosion. If on a slope, it requires a decent sized tractor that can safely be operated on the slope without tearing up everything, including the irrigation system. And in the end, it’s expensive.

The other approach is to just cut the tree down as low as possible without damaging the chain saw. Then as the irrigator makes inspections, just physically knock off the suckers as they come up. If walking the irrigation lines, it’s not a problem. Covering the stump and immediate area with a physical barrier such as thick, black plastic sheet (greater than 5 ml), can reduce the number of suckers. To speed degradation of the stump, the top of the cut can be scored and a salt such as urea or magnesium sulfate (both at 10 pounds per stump) can be applied. At this rate, rather than fertilize the stump, under moist conditions, this treatment facilitates the activity of wood-decaying microorganisms; it can also damage or reduce the regrowth of the suckers.

There are also a range of registered contact herbicides that can be used to burn out the suckers. Materials, such as Scythe®, Axxe® and Suppress® are all registered for avocado sucker control. There are others. These contact herbicide work best on small tender suckers so don’t let the suckers grow more than a foot or so. For best control of suckers, apply them at the highest allowable rate with an approved adjuvant at a spray-to-wet rate. Because these products are not systemic, you’ll likely need repeat applications, as new fresh buds break and new suckers erupt.

Although systemic herbicide can be used effectively to control suckers or stump sprouts in some tree crops or situations where root grafting does not occur, this is not a recommended practice for avocado because of the risk of damage to nearby trees. — By Ben Faber & Brad Hanson, UC Cooperative Extension