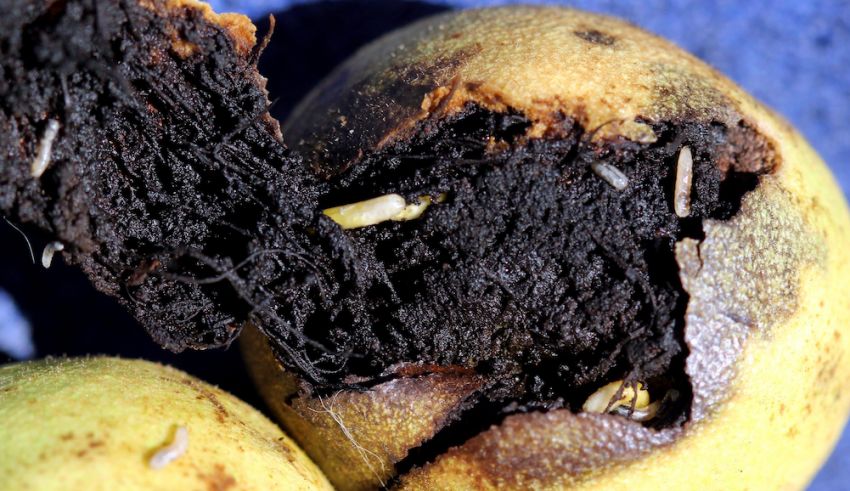 With almond and walnut harvest underway, it is a good time to review harvest nut sampling strategy and protocols for the best estimation of field loss by common pests. It is a general understanding that the grade sheet from your processers only represents about half of what is  going on in the field. Also, the whole sum percent damage from the grade sheet does not identify which pest is causing the most economic loss. Insect population in orchards builds over time; therefore, knowing the history of damage helps to address potential risks and strategies to next  year’s pest management program.

Taking a minimum of 500-1000 sample nuts from an average-sized orchard, anytime between shaking and sweeping, is recommended. Infestation can vary among different sides of the tree, and between edges and interiors of the orchard. This is especially true for navel orangeworm damage. Use paper bags to collect samples from multiple spots (>10 sampling spots, if possible) within the orchard. Store the sample bags in a cold room or freezer until you  have time to do crack out. Look for damage signs associated with insect species described in the following paragraphs. Major insect pests for the damage evaluation are navel orangeworm (NOW), peach twig borer (PTB), oriental fruit moth (OFM), ants, leaffooted bugs (LFB), and brown marmorated stink bug (BMSB). BMSB is an invasive stink bug species, which is established and causing damage in almond orchards in the northern San Joaquin Valley.

1.1. Worm Damage (NOW, PTB, OFM). NOW feed in the kernel (nutmeat) and create deep feeding tunnels. Feeding by NOW results in a significant amount of white frass, and webbings on the kernel (Fig. 1a). Since NOW and PTB often infest the same nut, NOW feeding damage often masks the PTB damage. Feeding damage signs by PTB and OFM on the nutmeat are similar (i.e., the presence of the shallow tunnels and surface grooves on the kernels, and no webbings) (Fig 1b & 1c), except OFM leaves a small amount of reddish frass on the hull, which is absent in PTB damaged nuts.

1.2. Ant Damage. The percentage of almond  damage by ants at harvest depends on the duration the nuts are on the ground after shaking. The longer almonds are left on the ground gives more time for ants to feed on them, results in more damage. Also, more damage is likely in orchards with drip or sprinkler irrigation compared to orchards with flood irrigation. Cover or vegetation in the orchards also favors ant activity. Nuts with tight shells or with narrower (<0.03-inch wide) hull split have less ant damage. Ants can completely hollow out the nutmeats and leave only thin skin (i.e., pellicle). Other signs of ant feeding damage include scraped or peeled pellicle and presence of “sawdust”, with the absence of webbings and frass (Fig 2a).

1.3. Leaffooted Bug and Brown Marmorated  Stink Bug Damage. Most nuts infested by the leaffooted bug or BMSB, early in the season (mid- March to mid-May), abort and drop. A small percentage of those infested nuts do not drop but end up becoming shriveled and gummy kernels at harvest (Fig  2b).  Both  LFB  and  BMSB  feeding  after  the shell hardening can result in sunken dark spots on kernels (Fig. 2c), although the degree of damage tends to be higher with BMSB feeding than LFB. Late-season feeding (July-August) by BMSB, can cause dark stained kernels (Fig 2d). Varieties with soft shells such as Fritz, Sonora, Aldrich, Livingston, Monterey, and Peerless are more susceptible to bug damage and for a longer period during the season.

It is recommended to take a minimum of 1000 nuts at the harvest and evaluate for the damage caused by navel orangeworm , codling moth, ants, husk fly, and sunburn. It is important to have representative samples (>10 samples with a minimum of 100 nuts/sample) from the orchard for better estimation of the infestation. The damage signs associated with these specific insect pests and sunburn are described as follows:

2.1. Worm Damage (NOW, CM). Navel Orangeworm damage can be identified by the presence of a large amount of frass and webbings (Fig 3a). NOW larvae are present in groups and can bore deeply into the kernel. Heavy infestation may give a nutshell an oily appearance. In contrast to NOW, a single codling moth larva infest the nut, and has a lot cleaner damaged area inside the nut. Frass is evident, but only at the entry  point  on  the  husk;  very  little  webbing present (Fig. 3b). If larva is present, look for crescent-shaped marking just behind the head to confirm navel orangeworm.

2.2. Ant Damage. Similar to almonds, nut damage by ants increase as the duration of the harvested nuts on the ground increase. Ants enter the nuts from the soft tissues (i.e., stem end) and/ or through a codling moth injury. Ant damage on nuts is identified by the presence of deep chewing channels with clean kernels (i.e., no frass, no webbings, no deep boring) (Fig 4a).

2.3. Husk Fly Damage. Walnut husk fly larvae (technical term: maggots) feed in groups by boring into the husk. Early season damage results in shriveling and darkening of the kernels, with  the increased potential for mold growth. Late- season infestation causes little kernel damage  (Fig. 4b), although it may stain the shell and make the husk removal process difficult.

2.4. Sunburn Damage. Sunburn damage on nuts can be confused with husk fly damage. In the case of sunburn, nutmeat is shriveled and darkened on one side of the nut — no evidence of frass, webbings, or larval presence (Fig. 4c). Husks  from sunburn damaged nuts can be removed from the shell during processing, which is not the case for the nuts damaged by husk fly.
— Article by Jhalendra Rijal, PhD, UCCE IPM Advisor, Stanislaus, Merced & San Joaquin Counties
Click To Comment