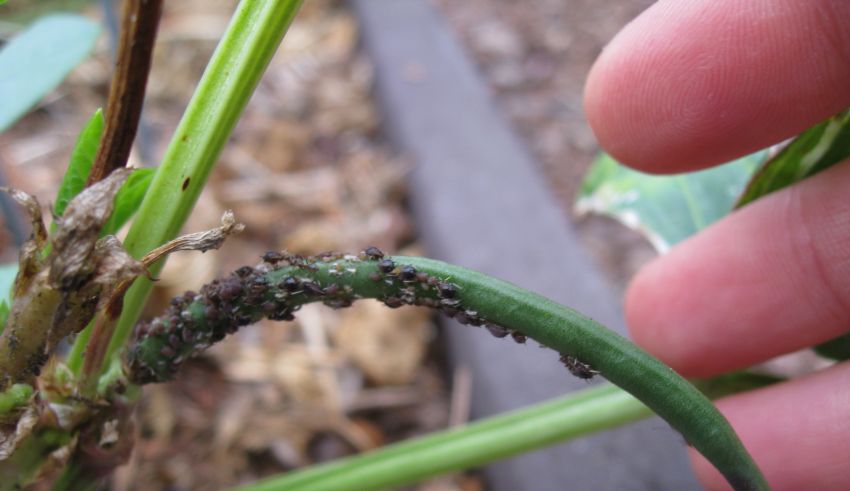 Field trials in the Central Valley with two new varieties of blackeye beans, CB74 and CB77, show impressive resistance to cowpea aphids compared to standard CB46, CB5, and CB50 lines. Four varieties of blackeyes including CB46, CB77, CB74, and CB5 were seeded into a blackeye CB50 field, in single lines on 30-inch beds in the Sacramento Valley in May 2020 (Photo 1). By mid-summer, CB50, CB46, and CB5 were heavily infested with aphids (photo 2), whereas CB74 and CB77 were clean (photo 3).

Cowpea aphids are serious insect pests of blackeyes. These aphids can quickly colonize plants and cause injury by direct feeding and injecting toxic saliva into plants, leading to stunted growth or death of plants. Sticky honeydew released by the aphids can stimulate black mold growth on plants, reducing photosynthesis and plant health. Cowpea aphids also vector a number of viral mosaic diseases that can cause serious losses in many crops. Biological control cannot be relied on because natural enemies often appear when cowpea aphid infestations are already high and causing serious damage. Applying pesticides early in the season prevents cowpea aphid infestations but beneficial insects can be destroyed, leading to outbreaks of other insect pests. Thus, the development of cowpea aphid resistant blackeye lines is an important breakthrough in managing this pest.

Blackeye beans, also known as cowpeas, or blackeye peas in southern states, are an important food crop worldwide. In California, about 8,000 acres are grown annually for dry or canned blackeye bean markets. These new blackeye bean lines are being developed by the UC Riverside blackeye breeding program, led by Drs. Phil Roberts and Bao Lam Huynh, with support from the California Dry Bean Advisory Board and the US AID Feed the Future Innovation Lab for Legume Systems Research (formerly Innovation Lab for Collaborative Research on Grain Legumes). The aphid resistance and other traits have been introgressed into California Blackeye elite backgrounds using natural selection and new molecular markers to expedite the breeding process. Compared to standard varieties, CB74 and CB77 also have more stable yields resulting from heat tolerance, better tolerance to lygus bugs, and equivalent resistance to Fusarium wilt and root-knot nematodes.

Blackeye variety observation trials are being conducted in fields by UCCE Farm Advisors Rachael Long, Sarah Light, and Nick Clark in the Sacramento and San Joaquin Valleys, in collaboration with local farmers. More information on blackeye beans can be found in the Blackeye bean production manual for California, UC ANR 21518, http://beans.ucanr.edu/files/226601.pdf. The lead UC bean breeders hope to have these lines available to farmers within the next few years. – By Rachael Freeman Long, UCCE Farm Advisor