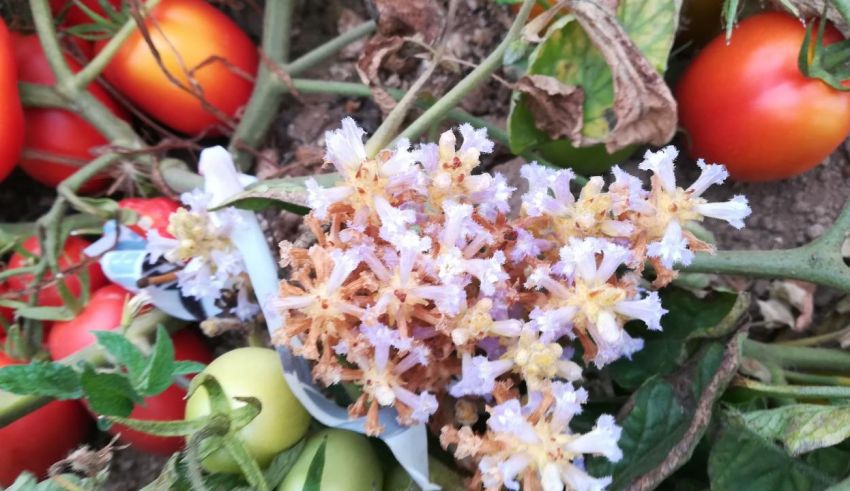 Branched broomrape (Phelipanche ramosa), a weedy parasitic plant that can cause devastating damage to many economically important wide range of broadleaf crops including tomato, cabbage, potato, eggplant, carrot, pepper, beans, celery, peanut and sunflower has recently re-emerged in fields in Central Valley counties in California. This weed utilizes a modified root, called haustorium, to fuse into a host plant root and extract nutrients and water which can greatly reduce productivity or even kill the host depending on the level of infestation, susceptibility of the host, and environmental conditions. Tomato is highly susceptible to branched broomrape. In the United States, California accounted for over 90% of the 12 million tons of tomatoes grown in 2018. Studies in Israel showed that at extreme infestation levels broomrape can cause processing tomato yield losses as high as 70%. The annual losses in tomato due to broomrapes in Israel and Turkey are estimated at $5 and $200 million, respectively. Up to 80% crop loss due to branched broomrape has been reported in tomato in Chile which is highly concerning given the similarity in production systems and broomrape species with California.

Branched broomrape is currently classified in California as an “A” pest, that is, “an organism of known economic importance subject to California State enforced action involving: eradication, quarantine regulation, containment, rejection, or other holding action”. As a potentially severe economic pest and as a California “A-list” pest, establishment and spread of a branched broomrape in California tomato production regions could cause severe consequences for individual growers and for the entire tomato industry. Currently, discovery of broomrape in a commercial tomato field leads to a hold order and crop destruction without harvest. In addition to branched broomrape, several fields have been reported with infestations of Egyptian broomrape (Phelipanche aegyptiaca), a Q-listed species (that is, having a temporary “A” classification pending determination of permanent rating by California State), causing similar industry and grower concerns.

A severe infestation of branched broomrape in the Sacramento Valley in 1959 prompted an intervention that involved soil fumigation with methyl bromide to target the soil seedbank; this was as an industry-led effort funded through a legislative marketing order program. Branched broomrape became a less significant problem after that effort which involved research, intensive field surveys, and fumigation of infested fields and equipment from 1973 to 1982 that cost over $1.5 million. However, this parasitic weed has recently been detected in several tomato fields in Yolo, Solano (Egyptian broomrape) and San Joaquin Counties. The cause of the re-emergence of the problem remains unclear, although re-introduction or recurrence from long-dormant seed in the soil and subsequent spread have been speculated.

The re-emergence of branched broomrape in California is of concern to the processing tomato industry as: 1) the experience in other regions of the world has demonstrated the extreme vulnerability of tomato to branched broomrape parasitism, 2) broomrapes seem likely to rapidly establish and spread in California because of the similarity to the species’ native climate, (3) repeated cultivation of processing tomato in the same fields, (4) the cultivation of a wide range of hosts (e.g. carrot, sunflower, safflower) in California, (5) intensive agricultural practices that could rapidly spread broomrape seeds to uninfested fields, (6) the production of copious number of minute seeds could easily disperse via machinery and irrigation water in the highly mechanized and irrigated cropping systems of California, (7) seed longevity (> 20 years) allows the parasite to persist even in the absence of any hosts, and (8) the major part of the parasite’s lifespan occur underground, making it inaccessible to conventional means of weed control such as cultivation and contact herbicides, (9) some of the important management tools (e.g. herbicides known to be effective in controlling broomrapes) are not yet registered or tested in California, (10) regulatory and environmental challenges with soil fumigation practices.