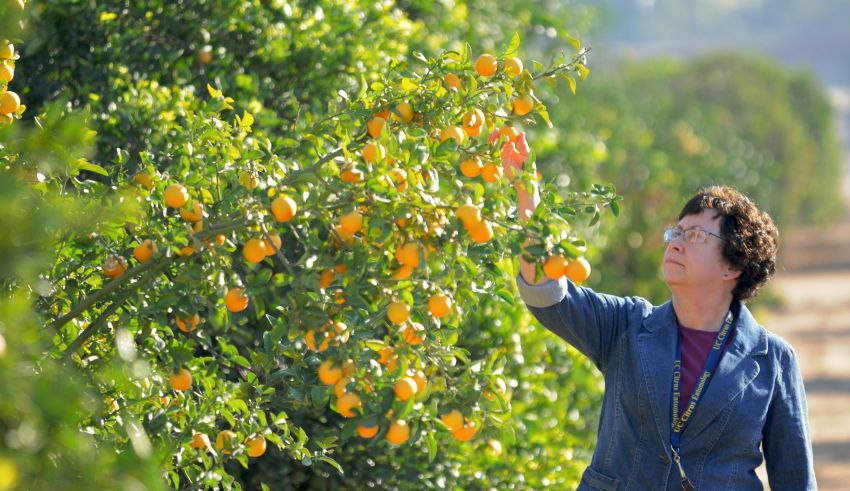 Through the years I have had many collaborators and numerous technical staff studying a wide variety of pests including California red scale, citricola scale, cottony cushion scale citrus cutworm, katydids, earwigs, Fuller rose beetle, citrus peelminer, citrus leafminer, citrus thrips, citrus red mite, snails, ants, aphids and Asian citrus psyllid as well as their natural enemies. In the early years, the main controls for these pests were organophosphate (OP) and carbamate insecticides. The initial research goal was to get these replaced with more selective insecticides that would allow natural enemies to participate in pest management. We successfully documented OP resistance in California red scale and citrus thrips and developed replacement insecticides that created a more balanced situation resulting in a reduction in pesticide use (as few as 4 treatments/year in the San Joaquin Valley). But alas, citrus IPM programs must change because new situations arise. For the citrus industry, the three drivers of change in the second half of my career have been drought exacerbating some pests, export countries demanding in- field treatments for insects as a replacement for Methyl Bromide (MeBr) fumigation, and the arrival of various invasive pests. These situations have provided me ample opportunities to work with regulators and the citrus industry and challenged my creative problem-solving abilities – never a dull moment.

It is hard to say if the past 8-9 years of higher temperatures and on and off drought conditions are a permanent ‘climate’ change or are part of a cycle. However, they have certainly made California red scale more difficult to control. Growers have shifted from treating for California red scale once every other year to treating 3-4 times per year. Extra heat units have added an extra generation of scale per year and occasionally allowed scale development in winter. My research response has been to study and provide outreach on the use of California red scale pheromone disruption as an assist to reduce insecticide treatments. I am encouraged to hear reports of some acreage going back treatments every few years for California red scale.

Export issues with S. Korea (Fuller rose beetle and California red scale) and with Australia and New Zealand (bean thrips and mites) began to crop up in the 2010s. In the past, shipments from California would be inspected at destination and, if there were any insects or mites of phytosanitary concern, the fruit would be fumigated with MeBr. With the worldwide reduction in MeBr use, there is now the expectation that California growers apply in-field treatments to eliminate these pests so fumigation at destination is not necessary. Complete disinfestation of an orchard is impossible to achieve so we launched studies on alternative fumigants and cold treatments that could be applied in California or during transport.

Invasive pests such as glassy-winged sharpshooter, Diaprepes root weevil, citrus leafminer, and Asian citrus psyllid have been arriving regularly into California since about 2000. In each case, I evaluated chemical and biological controls, evaluated the level of damage they could inflict and conducted outreach to prepare the citrus industry. Of course, Asian citrus psyllid has been the most significant invasive pests because of its ability to transmit the bacterium that causes the deadly disease huanglongbing. My role has been to develop control strategies for growers around the state and assist them with their psyllid management programs.

If I had to list the top three favorite projects of my career, they would be the following: