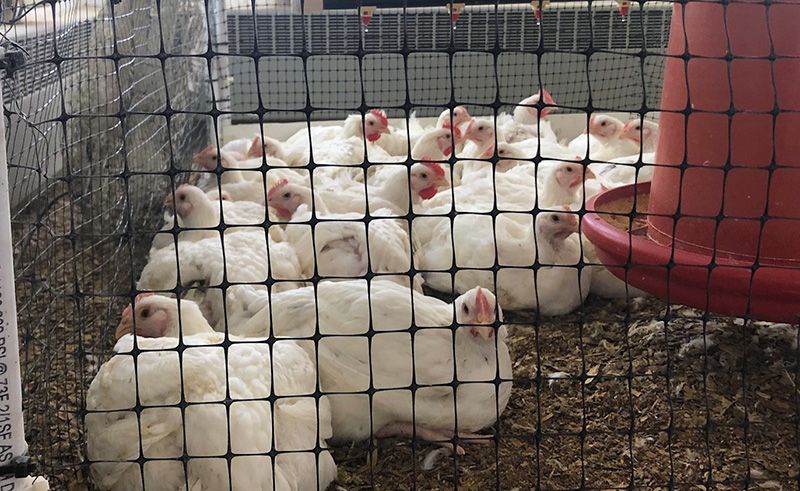 Chicken is the most consumed protein in the United States. According to the National Chicken Council, the U.S. produced more than 9.2 billion broiler chickens in 2019. US consumers spent more than 95 billion dollars on chicken products.

All these broilers – chickens raised for meat – need millions of tons of litter, or bedding material. Reusing chicken litter can save costs. There exists some health and safety concerns though.

A new study shows that the environment in reused poultry litter can deter growth of pathogens like Salmonella.

“When you read or hear that broiler litter is reused to raise multiple flocks of chickens, the typical reaction is that it must be bad for food safety,” says Adelumola Oladeinde, a co-author of the recent study. “Our study demonstrates the exact opposite.”

Oladeinde is a researcher at the USDA’s National Poultry Research Center in Athens. He and his colleagues found that ‘good’ bacteria in used poultry litter can hinder Salmonella growth.

“It may be worthwhile to invest time and resources to characterize the bacteria in reused litter,” says Oladeinde. “We can develop the promising ones into beneficial microbes for better chicken gut health.”

The study also explored litter characteristics, such as moisture and ammonia levels. These characteristics can dramatically affect the litter microbiome – the mix of bacteria, fungi, and viruses in litter.

“Our findings provide new information on the relationship between the physical environment of broiler litter and its microbiome,” says Oladeinde. “Management techniques that account for both factors may help reduce Salmonella in chickens.”

Chicken litter plays a big role in determining broiler health. After a broiler chick gets to a farm, it usually spends the next several weeks pecking and living on litter.

In fact, chicks begin to eat litter even before eating from feeding troughs or drinking. The microbiome present in the litter likely become the ‘first settlers’ in the guts of the chicks.

“These first microbes play a key role in determining gut health,” says Oladeinde. “Therefore, it is critical to determine what a beneficial litter microbiome looks like.”

The team collected samples of reused poultry litter from the University of Georgia Poultry Research Center. The litter was used to raise three flocks of broiler chickens under conditions like those used in broiler farms. “Each sample represents a unique broiler litter environment,” says Oladeinde.

In the lab, researchers measured characteristics of the litter samples. Then they added Salmonella to each sample. After that, the samples were tested for levels of Salmonella, other bacteria, and physical characteristics.

Within two weeks of adding Salmonella, most samples developed predictable microbiomes. Certain microbes, such as Nocardiopsis bacteria, seemed to reduce growth of Salmonella.

That makes sense, according to Oladeinde. Some species of Nocardiopsis bacteria are known to produce antibiotics and toxins. These compounds could be keeping Salmonella levels low in the litter samples.

A key aspect of reusing broiler litter is how long to wait before reuse. This waiting period is called litter downtime.

“For farmers, a shorter downtime will result in growing more birds through the year,” says Oladeinde. However, we know little about how downtime affects litter microbiome.

Results from the study show that surveying levels of specific bacteria could help determine if litters have had enough downtime. That could be of big help to farmers.

“Poultry litter is a complex environment to study,” says Oladeinde. “We showed that the reused litter after two weeks of downtime had a microbiome that was unfavorable to Salmonella.”

Oladeinde aims to repeat these experiments with litter from various sources. He also wants to test for multiple Salmonella strains. “These studies will tell us about the underlying mechanisms behind reusing litter and reducing Salmonella,” he says.

Read more about this research in Journal of Environmental Quality. This work was funded by the United States Department of Agriculture, Agricultural Research Service.