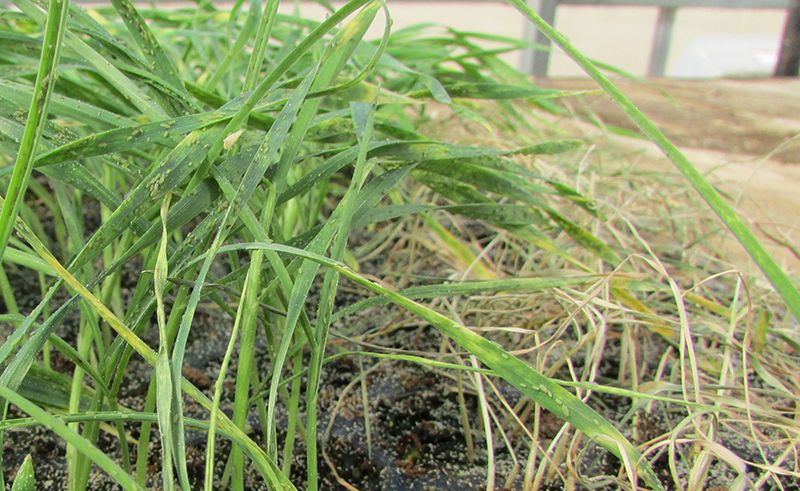 Fields of wheat are so associated with the U.S. that they’re featured in the song America the Beautiful as “amber waves of grain.” But those amber fields face a big threat: Russian wheat aphids.

As their name suggests, these aphids hail from Eurasia. These invasive pests first made their way to Texas in 1986. They’ve since spread to many states and cause billions of dollars of damage to wheat fields. So, crop scientists are desperate to find ways to stop the aphids in their tracks.

“Our major goal is to find genes connected with the resistance to all Russian wheat aphid types in the U.S. and transfer these genes to best wheat varieties,” says Xiangyang Xu. Xu is a scientist with the U.S. Department of Agriculture who studies these aphids. “When farmers grow these aphid-resistant varieties of wheat, they don’t need to worry about the pest.”

Unfortunately for farmers, there are at least five major variations of aphids in the U.S. Each type can survive on wheat with different resistance genes.

Until now, no wheat variety was known that could resist all five types of aphids. That makes genetic resistance the ideal way to protect against the aphids.

Xu and his team tested over a hundred varieties of wheat to find ones that were resistant to the aphids. The tests included wheat from Afghanistan, Denmark, Iran, Switzerland and the U.S.

After exposing all wheat varieties to all five types of aphids, researchers observed how much damage the aphids did to the plants. The plants that suffered only minor damage or no damage at all were counted as resistant.

The strongest varieties came from Iran, where both the aphids and wheat are native. That long history of coexistence likely explains why Iranian wheat has developed such strong resistance.

Now breeders can begin studying how these wheat varieties resist the aphids. And they can use these varieties in breeding programs to provide resistance to American varieties of wheat.

The aphids feed on the leaves of young wheat plants. This stunts the plant’s growth and can drop yield by up to 60%. Damaged leaves tend to curl around the insects. That curling can protect the aphids from pesticides sprayed on fields. And pesticides are expensive.

“Pesticides are available to control Russian wheat aphids in the field,” says Xu. “But the considerable costs will significantly reduce farmers’ profit. “

With these resistant plants identified, the next step is to cross resistant wheat varieties with high performing, but susceptible, varieties.

“We need to locate the genes first, and then transfer these genes into high-performing wheat varieties in the U.S.,” says Xu.

That will ensure that amber waves of grain stand strong in America for years to come.

Read more about this research in Crop Science. This work was funded by the United States Department of Agriculture in-house project 3072-21000-009-00D.