Botrytis fruit rot or gray mold, caused by Botrytis cinerea, is common fruit disease in California strawberries. Botrytis cinerea has a wide host range infecting several commercially important crops including blueberry, grapes and tomato.  Fungal infection can cause flower or fruit rot.  Fruit can be infected directly or through a latent infection in the flowers.  Moist and cool conditions favor fungal infections and increased sugar content in the ripening fruit can also contribute to the disease development.  Initial symptoms of infection appear as brown lesions and a thick mat of gray conidia is characteristic symptom in the later stages of infection.  As chemical fungicides are primarily used for gray mold control, fungicide resistance is a common problem around the world. In strawberry, cultural control options such as removing diseased plant material or using cultivars with traits that can reduce gray mold infections may not be practical when the disease is widespread in the field or cultivar choice is made based on other factors.  Non-chemical control options are necessary to help reduce the risk of chemical fungicide resistance, prolong the life of available chemical fungicides, achieve desired disease control, and to maintain environmental health.  Although there are several botanical and microbial fungicides available for gray mold control, limited information is available on their efficacy in California strawberries.  A study was conducted in the spring of 2019 to evaluate the efficacy of several chemical, botanical, and microbial fungicides in certain combinations and rotations to help identify effective options for an integrated disease management strategy.

Strawberry cultivar San Andreas was planted late November, 2018 and the study was conducted in April and May, 2019.  Each treatment had a 20′ long strawberry plot with two rows of plants replicated in a randomized complete block design.  Plots were maintained without any fungicidal applications until the study was initiated.  Table 1 contains the list of treatments, application rates and dates of application, and Table 2 contains the type of fungicide used and their mode of action.  Beauveria bassiana and Metarhizium anisopliae s.l. are California isolates of entomopathogenic fungi, isolated from an insect and a soil sample, respectively.  These fungi are pathogenic to a variety of arthropods and some strains are formulated as biopesticides for arthropod control.  However, earlier studies in California demonstrated that these fungi are also known to antagonize plant pathogens such as Fusarium oxysporum f.sp. vasinfectum Race 4 (Dara et al., 2016) and Macrophomina phaseolina (Dara et al., 2018) and reduce the disease severity.  To further evaluate their efficacy against B. cinerea, these two fungi were also included in this study alternating with two chemical fungicides. 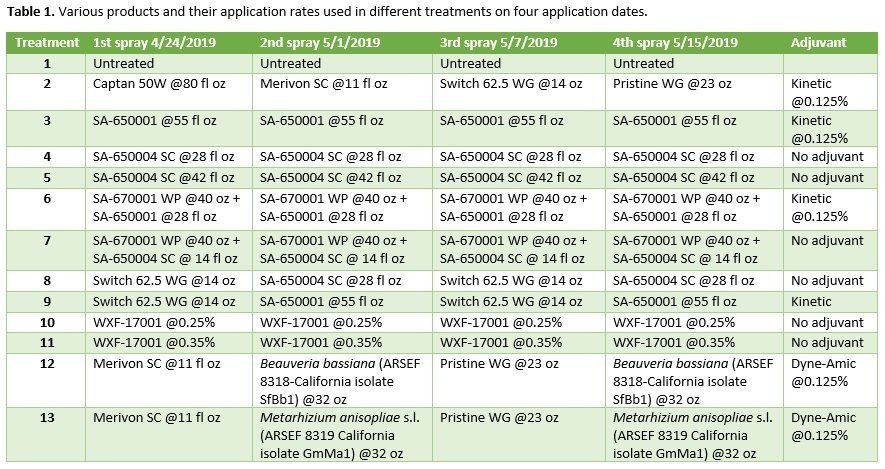 Treatments were applied with a CO2-pressurized backpack sprayer using 66.5 gpa spray volume.  Five days before the first spray application and 3 days after each application, all ripe fruit were harvested from each plot and incubated at the room temperature in vented plastic containers.  The level of gray mold on fruit from each plot was rated using a 0 to 4 scale (where 0=no disease, 1=1-25% fruit with fungal infection, 2=26-50% infection, 3=51-75%, and 4=76-100%) 3 and 5 days after each harvest (DAH).  Due to the rains, fruit could not be harvested after the 3rd spray application for disease rating, but was harvested and discarded after the rains to avoid cross infection for the following week’s harvest.  Data were analyzed using analysis of variance using Statistix software and significant means were separated using Least Significant Difference separation test.

Gray mold occurred at low to moderate levels during the study period.  Along with B. cinerea, there were a few instances of minor fungal infections from Rhizopus spp. (Rhizopus fruit rot) and Mucor spp. (Mucor fruit rot).  Pre-treatment disease ratings were statistically not significant (P = 0.6197 and 0.5741) 3 and 5 DAH.  While the chemical standard treatment with the rotation of Captan, Merivon, Switch, and Pristine (treatment 2) appeared to result in the lowest disease rating throughout the observation period, treatments 3 and 5 after the 1st spray application, treatments 5 and 11 along with 3, 4 and 6 after the 2nd spray application, and treatments 3 and 5 along with 11 after the 4thspray application also had similar disease control at 3 DAH.  When disease at 5 DAH was compared, the lowest rating was seen in treatment 2 after the 1st and 2nd spray applications, and treatments 2, 3, and 11 after the 4th application.  Several other treatments also provided statistically similar control during these days. 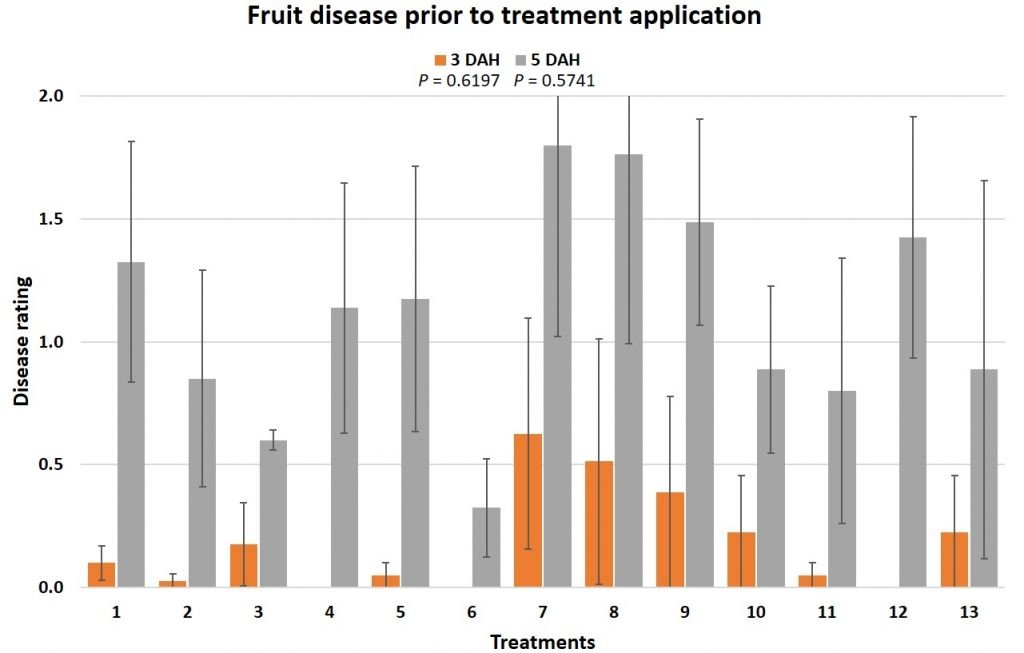 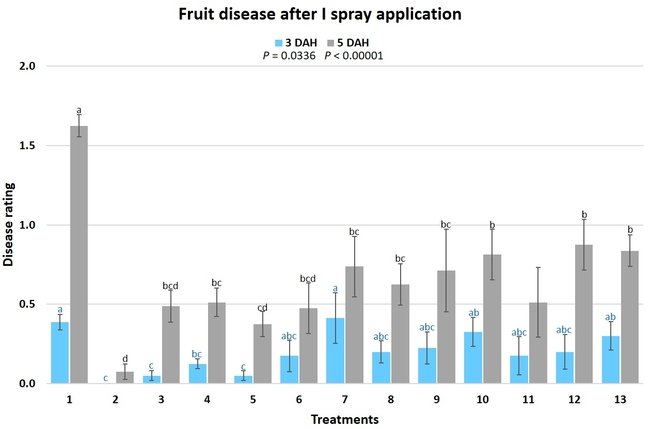 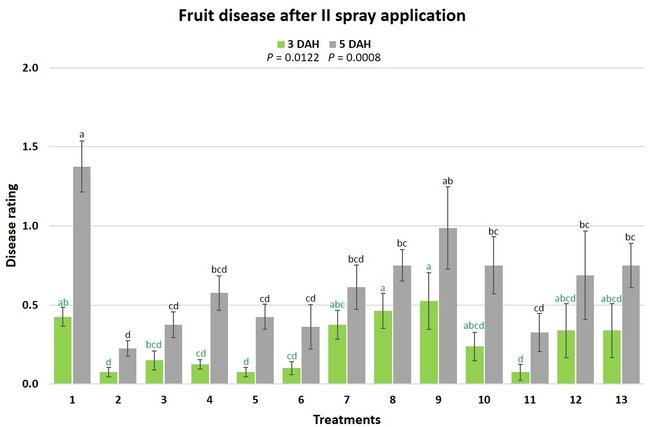 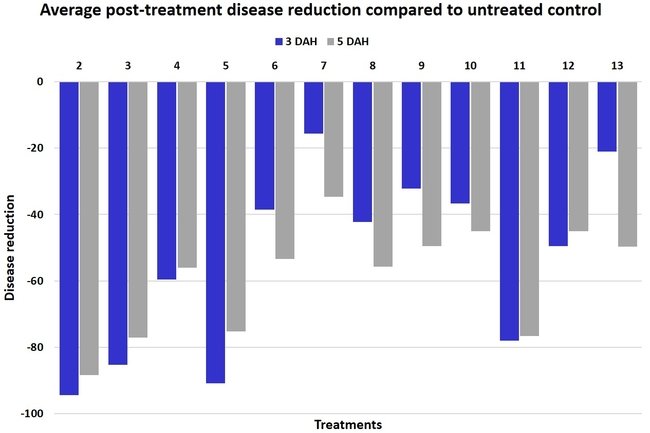 This study compared a variety of registered and developmental products along with two entomopathogenic fungi in managing B. cinerea.  Considering the fungicide resistance problem in B. cinerea in multiple crops, having multiple non-chemical control options is very important to achieve desirable control with integrated disease management strategies.  Since the active ingredients in the botanical and bacterial fungicides used in this study are not public, discuss will be limited on their modes of action and efficacy at this point.  Similarly, the active ingredient of WXF-17001 is also not known, however, an earlier study by Calvo-Garrido et al. (2014) demonstrated that a fatty acid-based natural product reduced B. cinerea conidial germination by 54% and disease severity in grapes by 96% compared to untreated control.  The product used by Calvo-Garrido et al. (2014) is thought to be fungistatic and reduce the postharvest respiratory activity and ethylene production in fruits.

While chemical fungicides have a specific mode of action, biological and other products act in multiple manners either directly antagonizing the plant pathogen or by triggering the plant defenses.  For example, amending the potting medium with biochar resulted in induced systemic resistance in tomato and reduced B. cinerea severity by 50% (Mehari et al., 2015).  Luna et al. (2016) also showed that application of β-aminobutyric acid and jasmonic acid promoted seed germination and long-term resistance to B. cinerea in tomato.  Burkholderia phytofirmans, beneficial endophytic bacterium, offered protection against B. cinerea in grapes by mobilizing carbon resources (callose deposition), triggering plant immune system (hydrogen peroxide production and priming of defense genese), and through antifungal activity (Miotto-Vilanova et al. 2016).  Similarly, entomopathogenic fungi such as B. bassiana are also known to induce systemic resistance against plant pathogens (Griffin et al. 2006).  Compared to other options evaluated in the study, entomopathogenic fungi have an advantage of controlling both arthropod pests and diseases, while also having plant growth promoting effect (Dara et al. 2017).

Rotating fungicides with different mode of actions reduces the risk of resistance development and using some combinations will also maintain control efficacy.  This study provided the efficacy of multiple control options and their combinations and rotations for B. cinerea.  This is also the first study demonstrating the efficacy of entomopathogenic fungi against B. cinerea in strawberry.