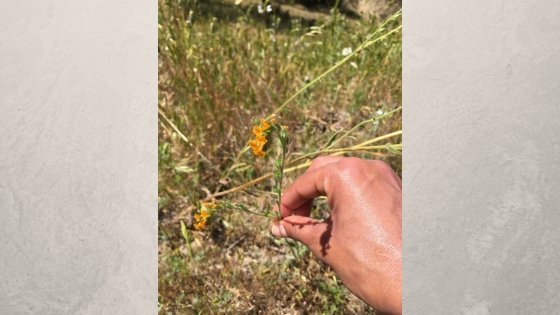 Fiddleneck (Amsinckia spp.) is a native plant in California. It occurs in grasslands and open, disturbed areas (DiTomaso, Kyser et al. 2013) and is sold as a pollinator plant in native plant seed mixes. Its bright yellow flowers catch the eye of those looking for wildflowers. However, it is important to note that fiddleneck is toxic to livestock. 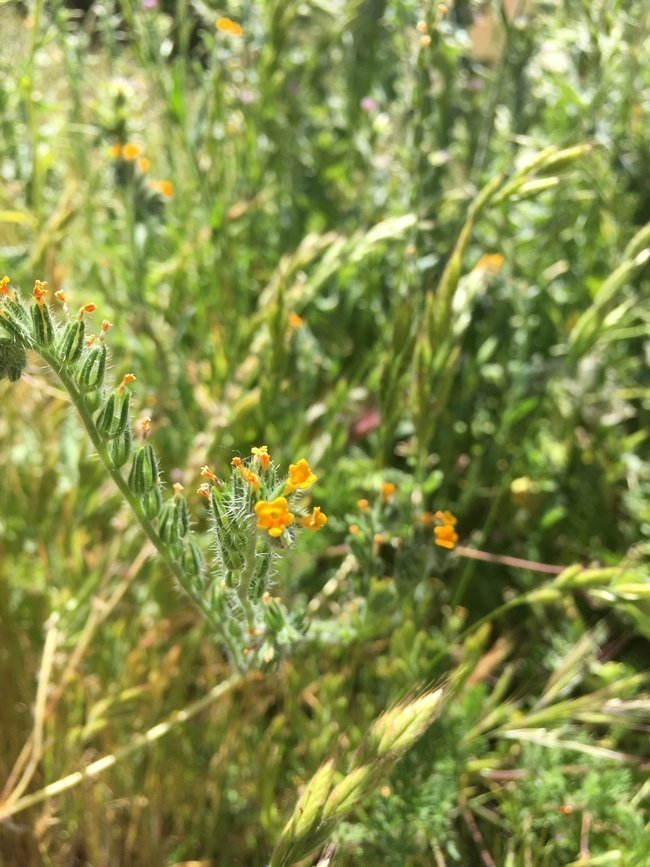 Fiddleneck seeds contain pyrrolizidine alkaloids which can affect the liver of cattle, horses, and pigs (Fuller and McClintock 1986). Based on necropsies from livestock tested at the California Animal Health and Food Safety (CAHFS) Lab, plants containing pyrrolizidine alkaloids were the number three source of plant toxicity to livestock (Forero et al. 2011). Oleander is the number one cause of plant toxicity in California livestock, based on testing from the lab. Horses and cattle are most affected whereas sheep and goats are typically not as impacted as other livestock.

Livestock are most likely be negatively affected by fiddleneck if they repeatedly consume contaminated hay or grain. Fuller and McClintock (1986) described one instance of poisoning in California:

“During the winter of 1962-1963, in the central San Joaquin Valley of California, in a lot of thirty dairy calves 2 ½ to 3 months old, ten died after eating weedy hay for 2 ½ to 5 months. The hay was a first-cutting alfalfa and oat mixture; about 5% to 10% of the plants were Amsinckia intermedia. Adult cattle fed this hay at the same time were not affected. That fall, however, calves that had been carried by these cows died shortly after birth; the alkaloids had been transferred through the placenta.”

You may not notice any problems in your animals for 2-8 months after they first begin consuming fiddleneck (Forero et al. 2011). A variety of symptoms can be seen, including eating less, losing weight, constipation, diarrhea, etc. Burrows and Tyrl (2013) summarized previous research indicating that cattle, horses, and pigs can be afflicted with walking disease (when animals walk around aimlessly) if they consume feed grain contaminated with 10-25% Amsinckia intermedia seed. If severe enough, livestock can die due to the liver disease caused by the pyrrolizidine alkaloids (Forero et al. 2011). Currently, there is no treatment available. 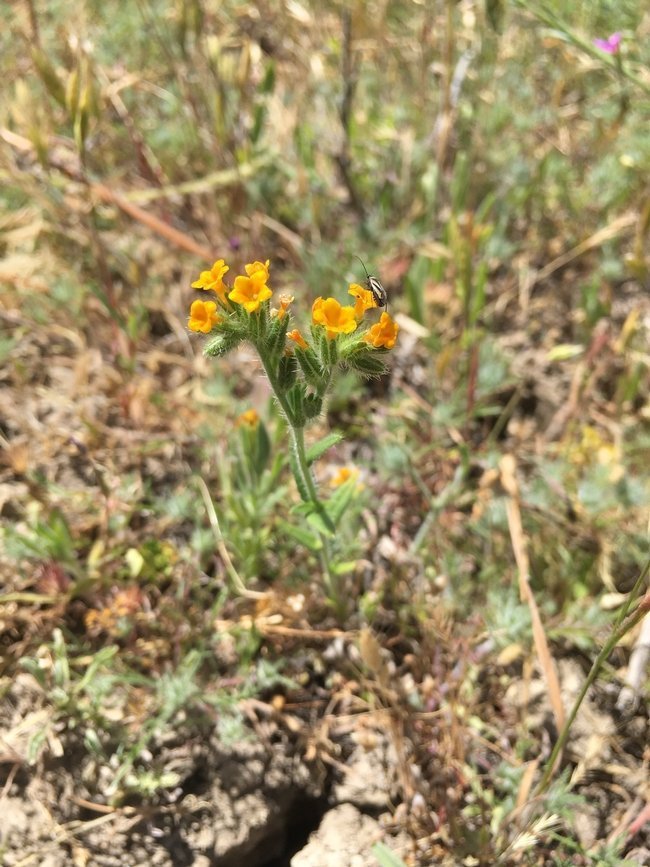 Because fiddleneck is a native plant and it is toxic to livestock, there are limited control options. If you have an infestation of fiddleneck, you may want to consider mowing, which can be effective when done before seeds are produced (DiTomaso, Kyser et al. 2013). California rangelands are often steep with rough terrain, so mowing may not be practical. Herbicides are also an option. Aminopyralid (Milestone) can be used in the early spring when plants are still in the rosette stage. Aminopyralid is a broadleaf herbicide and will not impact grasses. Chlorsulfuron (Telar) can be used as a preemergent or postemergent. For fiddleneck preemergence is the better option. Chlorsulfuron should not impact most grasses.

Multiple agency managers and ranchers have observed that cattle tend to avoid fiddleneck because of its prickly hairs. So, as long as there is plenty of other forage available for the livestock to eat, people usually aren’t too concerned. The biggest concern is when fiddleneck is a contaminant in hay or grain because the animals are not able to selectively avoid eating it.

It’s too late in the season to control fiddleneck this year, but it’s a good time to consider whether or not you have so much of it that it warrants control in the future. If you decide to control your fiddleneck, come up with a plan early so you know you’ll be able to conduct your control efforts at the most effective time.