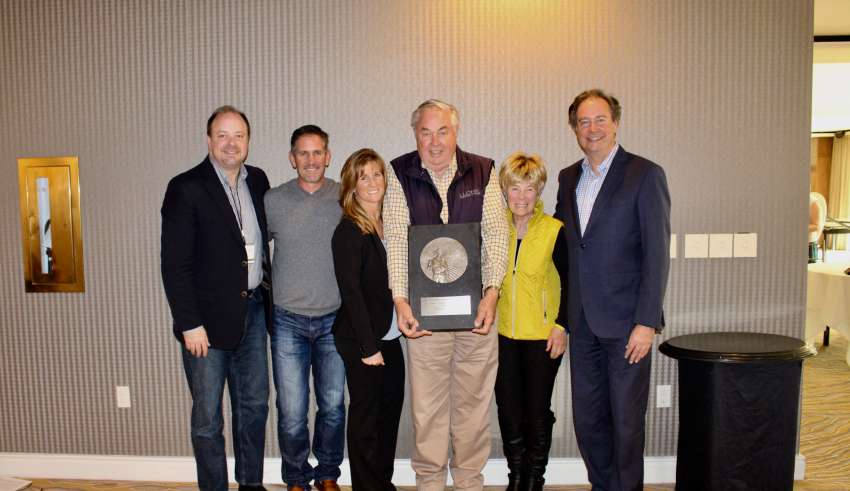 The third annual Rich Smith Distinguished Service Award for major contributions to the American grape and wine industry, and to research, was given to Jerry Lohr of J. Lohr Vineyards and Wines. Lohr has committed nearly 50 years of leadership and achievement to the wine industry. 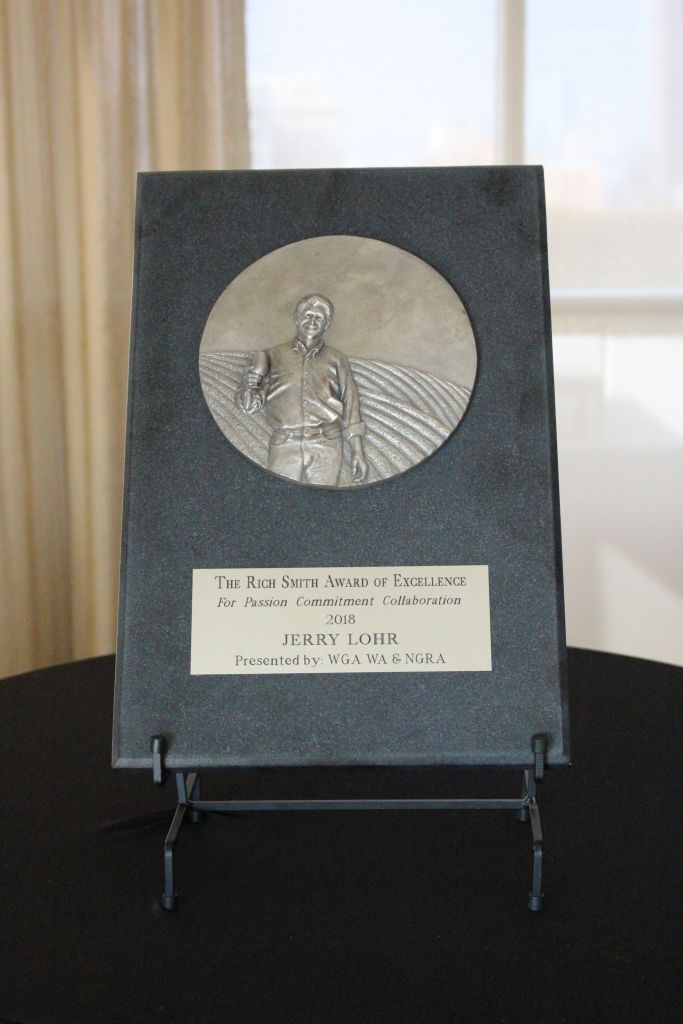 The award was presented to Lohr at the annual Leadership Luncheon of the Winegrape Growers of America (WGA), which co-sponsors the award with the National Grape Research Alliance (NGRA) and WineAmerica. The late Richard “Rich” Smith was a tireless leader and advocate for each of the three organizations. The luncheon was held during the Unified Wine & Grape Symposium, the wine and grape industry’s largest conference and trade show.

Smith was founder and co-owner with his wife, Claudia Alexander Smith, of Paraiso Vineyards and Smith Family Wines in California’s Santa Lucia Highlands AVA. He was widely known and revered for his passion for the wine and grape industry, his commitment to enhancing its future, and his collaboration with colleagues to achieve collective goals. Those three words – passion, commitment and collaboration – are inscribed on the award, which is presented annually to a person who emulates Smith’s defining traits and works as tirelessly for the common good.

Claudia and Jason Smith, son of Rich and Claudia, stated, “It is an honor to present this award to Jerry. His decades of dedication to the industry and all its facets – research, marketing, policy, science and more – have been integral to the success of our industry nationwide. Jerry and my dad sat on many boards and shared a similar passion to do what is best for the winegrape growing community in a selfless and dedicated way that is hard to replicate. It gives the family great pleasure to share this award with Jerry in my dad’s name.”

Lohr is respected universally by his peers for his intimate understanding of California winegrowing and for his vast knowledge, with which he can address all facets of winegrowing, from the day-to-day details of vineyard management to leading-edge viticultural research. An industry leader and one of the few remaining substantial independents, he is a fervent advocate both for the Arroyo Seco AVA of Monterey County and for Paso Robles; he is an energetic and articulate champion for these regions.

Lohr’s dedication goes beyond J. Lohr Vineyards & Wines. His work on behalf of the entire industry has included former posts as director and chair of Wine Institute and chair of the Monterey Winegrowers Council. He is also one of the four founding members of Wine Vision, an industry group that promotes a long-range view of the wine industry. Additionally, Lohr founded the National Grape and Wine Initiative, now known as the National Grape Research Alliance, a coalition representing grape growers, processors, wineries and academic institutions committed to improving the industry. 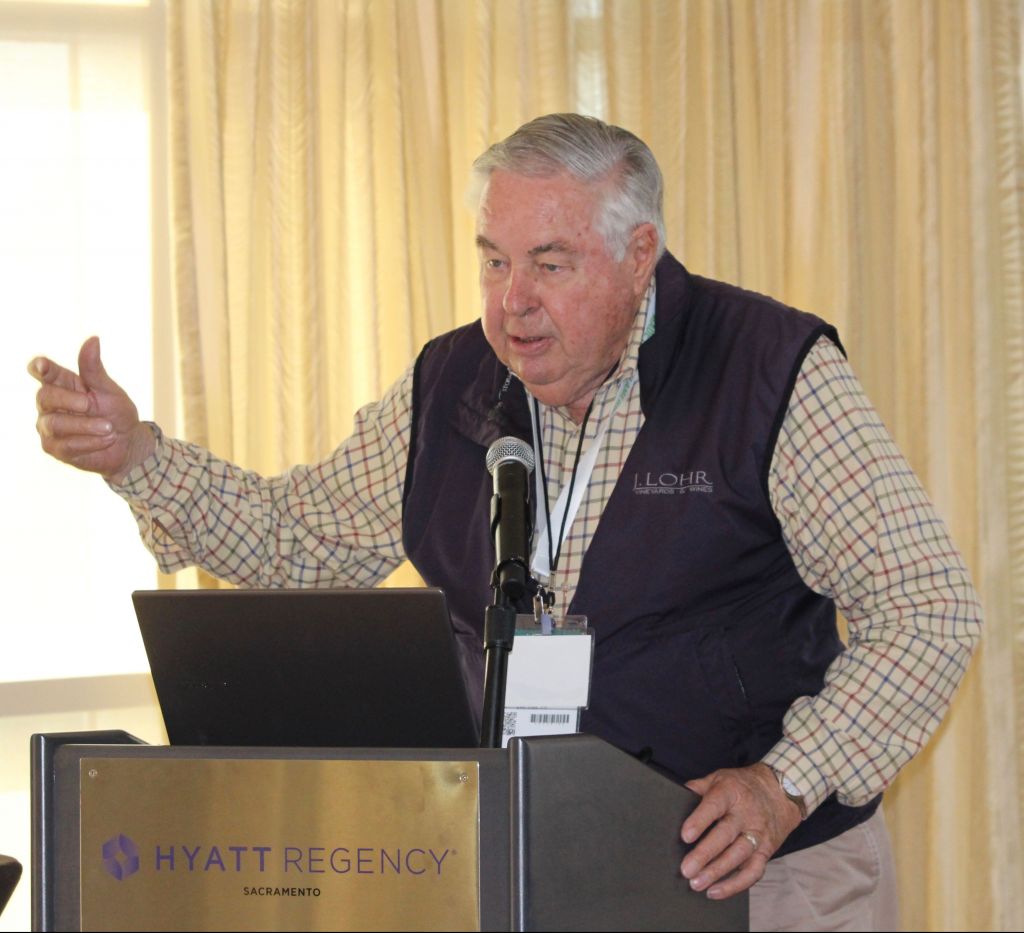 In 2007, UC Davis honored Lohr with its Award of Distinction, and the California State Fair presented him with a Lifetime Achievement Award. The following year, 2008, he was named Wine Industry Person of the Year by the Paso Robles Wine Country Alliance. In 2010, Lohr received the Professional Excellence in Oenology Award from the New York Institute of Technology, and in 2011 the California Association of Winegrape Growers (CAWG) honored Lohr with a Lifetime Achievement Award. He was also named the 2011 Volunteer of the Year by the District VI Council for Advancement and Support of Education (CASE) and was awarded the 2011 Merit Award from the American Society for Enology and Viticulture. And, in 2017 Lohr was honored with Wine Enthusiast Magazine’s American Wine Legend Wine Star Award and with Wine Business Monthly’s Innovator of the Year Award.

To select the recipient of the Rich Smith Distinguished Service Award, all three organizations and the Smith family submitted nominations and, together with the previous winners, John Martini (Anthony Road Winery) and Pete Downs (Family Winemakers of California), made the final selection. It is not required that the recipient be associated with any of the three organizations, just that he or she has made major contributions to the American grape and wine industry while demonstrating qualities consistent with Rich Smith’s memory. The award sponsors and Smith family are proud to honor Rich and encourage a legacy of service worthy of his name.