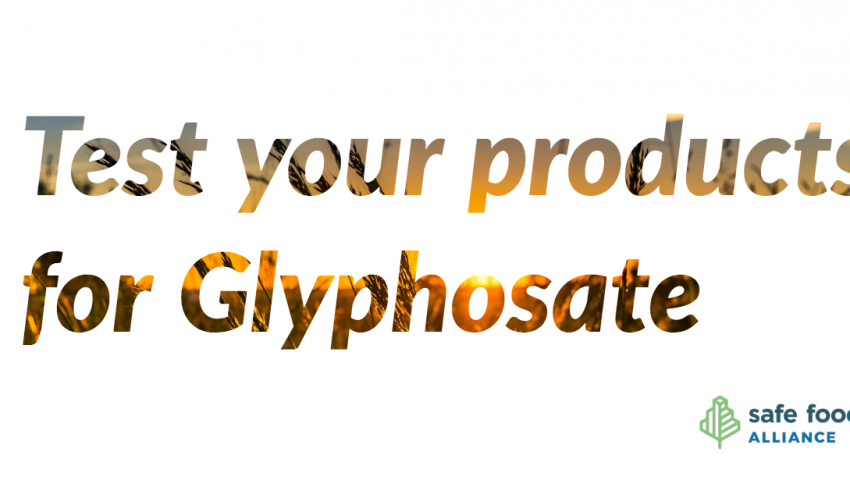 Glyphosate: In the News

Chances are you’ve been hearing a lot in the news recently about glyphosate, the active ingredient in the herbicide and plant growth regulator Roundup®.

In early August, a jury awarded $289 million to a former groundskeeper who claimed that exposure to Roundup® caused his non-Hodgkin’s lymphoma. This heavily publicized case was quickly followed by a report from the Environmental Working Group (EWG), which found that 31 out of 45 of the conventionally grown cereals being tested “…had glyphosate levels higher than what EWG scientists consider protective of children’s health with an adequate margin of safety”.

According to the EWG report, glyphosate levels in cereals must remain under 0.01 milligrams or a concentration of 160 ppb (part-per-billion). Levels above this benchmark standard were reported to cause increased health concerns for consumers.

The EWG report authors reached a consumption limit of 0.01 milligrams per day by applying a 100x safety factor to California’s Proposition 65 No Significant Risk Level (NSRL) for glyphosate (1.1 mg/day). This NSRL under Prop. 65 itself represents a more than a 100x reduction from the acceptable daily intakes (ADIs) set by both the United States Environmental Protection Agency (EPA) and the World Health Organization (WHO) after their reviews of the toxicity data for glyphosate. In other words, the Environmental Working Group set a “safety limit” that was 10,000-fold below the risk-based limits set by EPA and WHO!

The European Commission is famously cautious when it comes to setting pesticide residue limits. Even using the safe intake level set by the Commission – consuming 0.3 mg of glyphosate per kg of body weight per day-a person would have to weigh less than one-tenth of a pound to stay under the EWG benchmark.

Studies such as the EWG report raise the anxiety level for consumers trying to feed their families a healthy diet. As a result, that concern is filtering up through retailors, meaning if it hasn’t already reached you, it will soon.  As with most regulatory issues in agriculture, preparation is key. One step is to consider testingfor glyphosate residues now so that you’re pre-armed with the data your customers will demand.

What You Need to Know About Glyphosate Analysis

The first thing to know about glyphosate testing is that, despite the fact that it is one of the most commonly used pesticides in the US (and the world), it is not included in general pesticide residue screens.  With modern techniques and instrumentation, a multi-residue screen can cover over 300 compounds, but the chemical nature of glyphosate (high polarity / water solubility) makes it distinct from the vast majority of commonly applied pesticides. That means a specialized test is needed to be able to detect it.

The good news is that the specific formulation of glyphosate used (isopropylamine salt, sodium salt, etc.) does not affect the analysis needed.  It is, however, important to know the residue definition for your specific market and commodity. For instance, the residue definition for glyphosate in wheat for the US and the EU requires that you only measure the amount of glyphosate in the commodity.  Codex, on the other hand, requires that you also measure the amount of N-acetylglyphosate, which is a metabolite of glyphosate; Australia requires glyphosate, N-acetylglyphosate and AMPA (another metabolite).  Make sure the testing lab you use is measuring the correct compounds for your needs.

The last thing that’s important when testing for glyphosate is to make sure that the laboratory doing your testing has previously validated their method for your commodity or commodity group.  Many of the methods for glyphosate analysis, including the official EU QuPPE method, have not been validated for tree nuts, avocado, animal products or other high fat matrices. Safe Food Alliance offers glyphosate analysis for most agricultural commodities grown in California (including tree nuts); either by itself, or as part of our Polar Pesticide Screen, which also includes glufosinate, ethephon, paraquat, diquat, mepiquat, and chlormequat.

This article was written by Wiley Hall from the Safe Food Alliance.  https://safefoodalliance.com/newsletter/2018-09/testing-your-product-for-glyphosate/