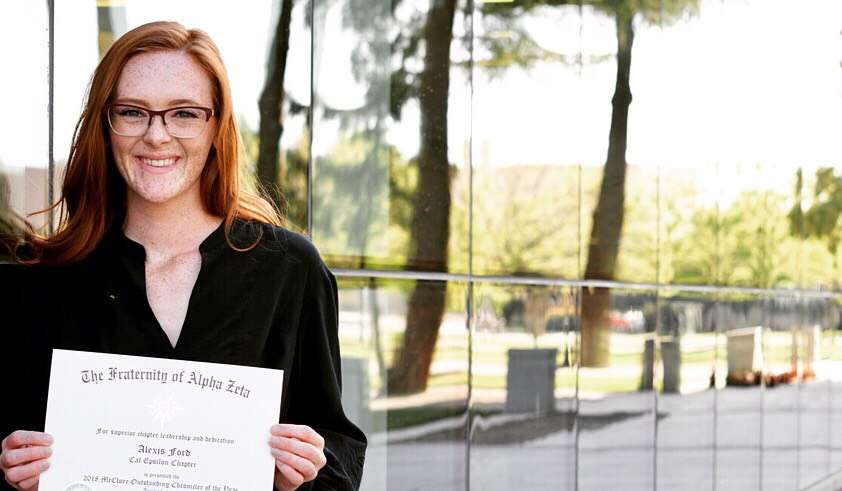 Fresno State senior Alexis Ford was named the 2018 Alpha Zeta McClure Outstanding Chronicler of the Year by the national agricultural honorary leadership student organization. An agricultural communications major from Pine Mountain, Ford is a member of the Alpha Zeta Cal Epsilon organization and coordinates all of the club’s public relations efforts.

The award was based on her publicity efforts promoting the organization’s outreach to the community and to the agriculture industry via social media and blogs for the campus and national Alpha Zeta outlets.  “I hope that my work as chronicler helped the chapter and campus inspire a better understanding of how the agriculture industry and urbanized areas are inherently linked together, as they can both thrive and support each other,” Ford said.

This past semester she promoted six community outreach events that included agriculture advocacy by Alpha Zeta members at the Fresno Chaffee Zoo, the campus spring plant and vegetable sale, FFA events, Common Threads Luncheon and the Kids Day newspaper sale where the organization raised $550 for Valley Children’s Hospital.   Among her 33 blog posts, she profiled eight current or former members that included Monique Bienvenue, an Alpha Zeta national chancellor honoree of the year in 2013.

A graduate of Frazier Mountain High School in 2014, Ford is a former FFA chapter secretary, Greenhand president and state FFA Award recipient. Her father, John Ford, first introduced her to agriculture through his passionate involvement in the horticulture and nursery industry, which he has worked in for over 40 years.  Ford works at Fresno State as a University Communications social media student assistant, and she aspires to work in a public relations career where she can advocate for agriculture on the national level.

“I believe the future of agriculture not only rests upon our farmers, ranchers and teachers that are developing and sharing sciences and technologies, but with people like myself explaining agriculture’s importance to the wellbeing of every family, community and beyond,” Ford said. “It’s time for agriculture to repair broken connections, and be more genuine and accessible.”