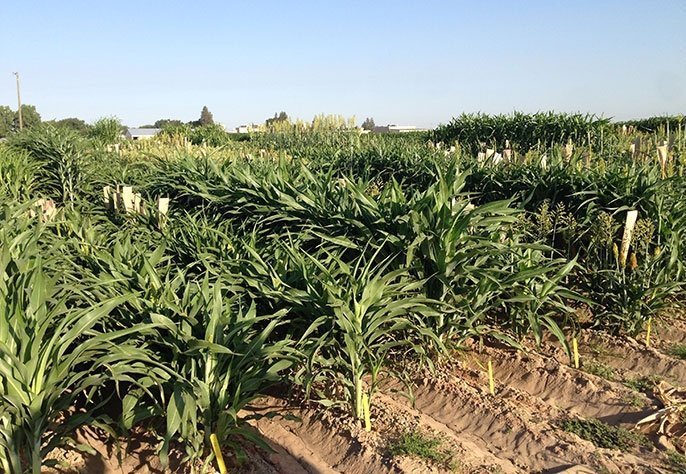 Berkeley, Calif., (May 2, 2018) – As sorghum plants cope with drought conditions, the plants’ roots and adjoining microbial communities are communicating in a chemical language that appears to improve the plants’ chances under water stress.

“It’s amazing,” said Peggy Lemaux, UC Cooperative Extension specialist. “We know there are lots of microbes in the soil and, for the most part, ones in the surrounding soil stayed the same under drought conditions. We only saw changes in those microbes closely associated with the roots.”

The role of drought in restructuring the root microbiome was the first published discovery to come out of a sweeping drought research project underway since 2015 in the fields at UC Kearney Research and Extension Center in Parlier. The five-year study, funded with a $12.3 million grant from the Department of Energy, aims to tease out the genetics of drought tolerance in sorghum and its associated microbes. Using sorghum as a model, scientists hope the research will help them understand and improve drought tolerance in other crops as well.

The new research results from the lab of USDA’s Devin Coleman-Derr at UC Berkeley, published April 16, 2018, in the Proceedings of the National Academy of Sciences, document the fate of microbes associated with sorghum roots under three distinct irrigation regimens. Because the San Joaquin Valley generally sees no rain during the growing season, it is the ideal place to mimic drought conditions by withholding irrigation water.

All plots received a pre-plant irrigation to initiate growth. In the control plots, sorghum was irrigated normally, with weekly watering through the season. In the plot simulating pre-flowering drought stress, the plants received no additional water until flowering, about halfway through the season. The third treatment was watered normally until it flowered, and then water was cut off for the rest of the season.

Beginning when the plants emerged, the scientists collected samples from each plot on the same day and time each week for 17 weeks. In a mini, in-field laboratory, roots, rhizosphere (zone surrounding the root), leaves and soil samples from 10 plants in each plot were immediately frozen and transported to Berkeley, where they were disseminated to collaborators, who investigated the plant and microbial responses at the molecular level.

“When a sorghum plant is subjected to drought, it starts sloughing off metabolites, nutrients and amino acids from the roots. The compounds appear to communicate to the neighboring microbial community that the plant is under stress,” Lemaux said. “That selects out a certain population of microbes. Certain types of microbes increase, others go away. When you add water back, the microbial community returns to its pre-drought population in just a few days.”

“A lot of companies are interested in the microbiome,” she said. “Some are already selling microbes to coat seeds.”