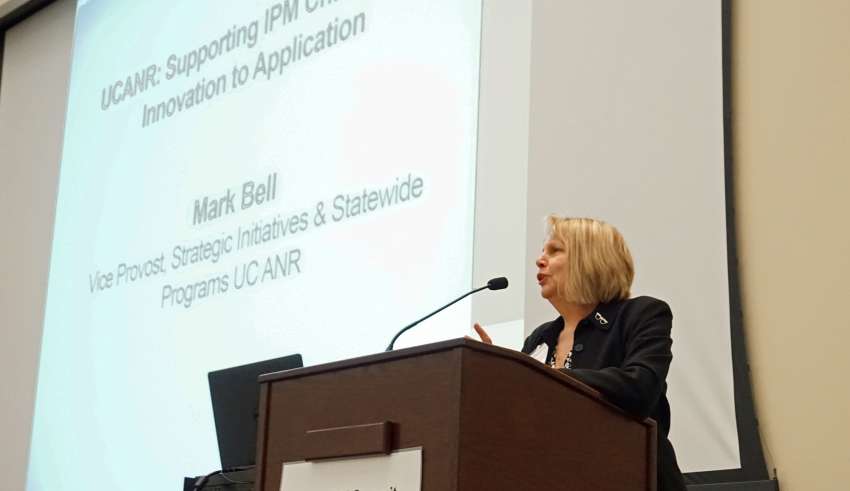 Davis, Calif., (April 30, 2018) – Pests have always been a bane of human existence. Modern society has developed effective pest management, “but there is no kind and gentle way to kill things,” said Brian Leahy, the director of the California Department of Pesticide Regulation, in remarks at the April 2018 IPM Summit.

The ever increasing incidence of invasive pests and the concerns about how to manage them will be a continuing challenge. Leahy said society is on a pest treadmill; and the best way to address it is with integrated pest management (IPM).

The concept of integrated pest management emerged 60 years ago when scientists recognized that imposing a harsh chemical on a natural system threw it off kilter, often causing unexpected, usually negative consequences. They realized that combining an array of pest control methods – such as careful supervision of insect levels, promotion of beneficial insects, and using less harsh products – would be more effective, safer for families and farmworkers, and kinder to the environment in the long run.

And yet, pesticides are still widely used in agricultural, horticultural and structural systems.

The meeting in Davis brought together nearly 200 people engaged in the science, business and regulation of pest management. They were assembled to address the tensions around pesticides and their alternatives, and usher in a new generation of researchers and practitioners to maintain and expand on six decades of progress in integrated pest management.

The IPM Summit is the final chapter of a collaborative effort titled “The Pests, Pesticides & IPM Project,” which was funded by DPR to enhance dialog about pest management. The project leader is Lori Berger, UC IPM academic coordinator.

“This project addresses the challenges pests pose to society,” Berger said. “We want to increase adoption of IPM practices on farms, and also in schools, homes, museums and golf courses. We’re all in this together.”

“In the early 1900s, vector control started with concerns about malaria and mosquito populations,” Middleton said.

Over decades, the vector control district worked behind the scenes to keep mosquito populations in check. But in recent years, new species of mosquitos capable of spreading Zika, West Nile encephalitis, chikungunya and yellow fever have made their way to LA, intensifying concerns.

Trash rife with nutrients – such as discarded food and plant materials – are perfect nourishment for immature mosquitos, a condition referred to as “urban gruel.”

Higher temperatures predicted because of climate change only threaten to exacerbate the problem.

“A warming world is a sicker world,” Middleton said.

An effective IPM approach to mosquitos is short-circuiting their reproduction opportunities by enlisting residents to maintain swimming pools, drain any receptacles that can capture rainwater or irrigation, and be vigilant about basins containing water in their environments.

These efforts are emblematic of the societal collaboration that can tackle pest problems without pesticides.

In his IPM Summit presentation, Goodell called for public sector investment in basic research, applied research, extension and education to find IPM solutions and encourage implementation. He appealed for IPM outreach to include community organizations, home owners associations and other non-traditional partners. He suggested agriculture take advantage of farmworkers’ presence in the field for early pest detection.

“Technical pest management skills are critical, but it’s connections with people that are key to bringing about change,” Goodell said.