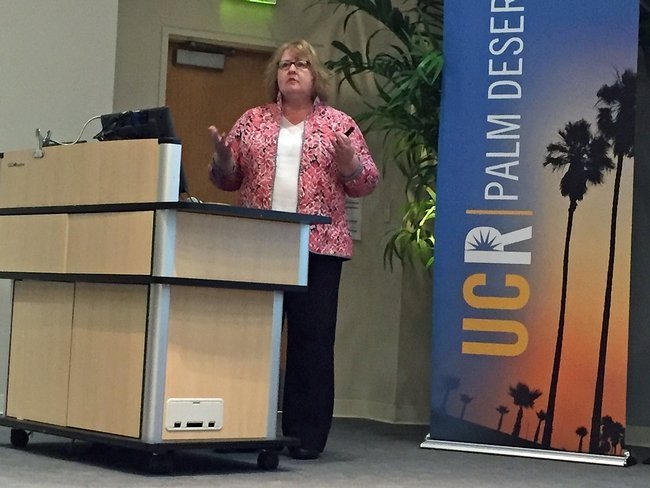 Parlier, Calif., (March 9, 2018) – Stretching from the Death Valley to Calexico, California’s vast dry desert is home to a unique and important agriculture industry.

It’s a place where summertime temperatures often top the 115-degree mark. Where water supplies for irrigation depend on the Colorado River, but upriver states are claiming more of it. Where evapotrasporation – a reference rate of water use in unstressed turf grass – is 72 inches per year, but rainfall is rarely more than 4.

The California desert also impacts the quality of life across the nation. If Americans are enjoying a salad in the winter, the lettuce most likely was grown in the California desert. There are bountiful winter recreation opportunities available on the beautifully manicured golf courses, parks and landscapes.

A group of UC Agriculture and Natural Resources (UC ANR) academics formed a desert workgroup to better serve the state’s desert region. The group organized a symposium in February to bring together representatives from desert farm and natural resources communities, related industry and academics working in the desert.

“The close exchange of information among desert researchers, non-profit organizations, industry and clientele groups will facilitate collaboration among UC ANR, Arizona and Mexico and foster how our programs should be shaped on a regional level,” said Oli Bachie, the director of UC Cooperative Extension in Imperial County and the current workgroup chair.

“The term ‘wicked problem’ was coined at UC Berkeley,” Powers said. “It’s a problem with circumstances that resist resolution.”

She named climate change and the growth of the global population California must help feed as wicked problems faced by the state. Powers described UC ANR’s statewide programs that are working to find solutions to formidable issues faced in California agriculture.

“We’re on the verge of some serious breakthroughs as we look at solving wicked problems,” Powers said. “They are accelerated by conversations like those we’re having today.”

UC Vice Provost Mark Bell said that the potential of UC ANR to reach every single Californian is what drew him to his position in 2017. Bell invoked Star Wars robot R2D2 for an acronym to reflect the characteristics that accurately define UC ANR.

“R2 stands for reach and relevance,” he said. “D2 is diverse and dispersed.”

UC Cooperative Extension offices serve 57 California counties and its nine research and extension centers are located in key agriculture ecosystems, including one in the low desert of the Imperial Valley.

The afternoon program of the symposium included breakout sessions to highlight programs and research efforts in three broad areas: irrigation and crop production, landscape management, and livestock and feed quality.

“This was the first attempt to organize such a regional desert-based symposium for the UCANR Desert Workgroup with the collaboration of desert-serving UCCE counties,” Bachie said. “I believe that we have registered a remarkable get-together.”

“I believe that the symposium is a stepping stone for future desert research and extension meetings, conferences and symposiums among people engaged or interested in desert agriculture and natural resources,” Bachie said.