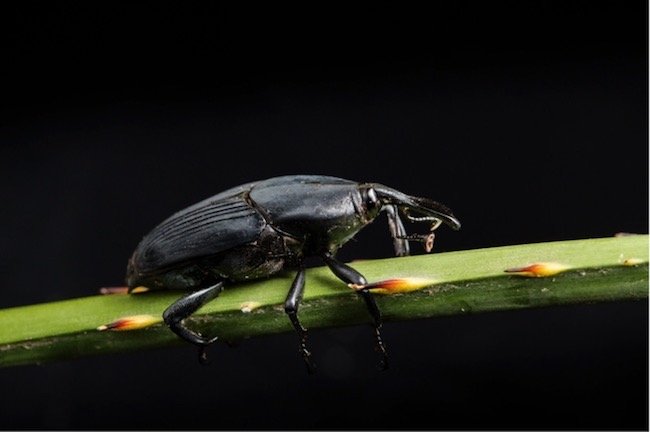 San Diego, Calif., (March 13, 2018) – South American palm weevils that have made their way north from Mexico are having a destructive impact on palm trees in the San Diego region, reported Abbie Alford on CBS News 8 TV in San Diego.

UC Cooperative Extension specialist Mark Hoddle, the director of the Center for Invasive Species Research at UC Riverside, toured the reporter through the hard-hit Sweetwater Reserve in Bonita, where 10 percent of the palms die every three months.

“We are going to see hundreds, thousands of Canary Island Date Palms die over the next couple of years,” he said.

The weevils use their protruding noses to drill holes in the palm, where females lay their eggs.

San Diego County Agriculture, Weights and Measurements said it plans to remove 50 infested Canary Island Palms from the Sweetwater Regional Park and is educating arborists about the invasive pest.

A spokesperson for the City of San Diego said it is working with UC Cooperative Extension.