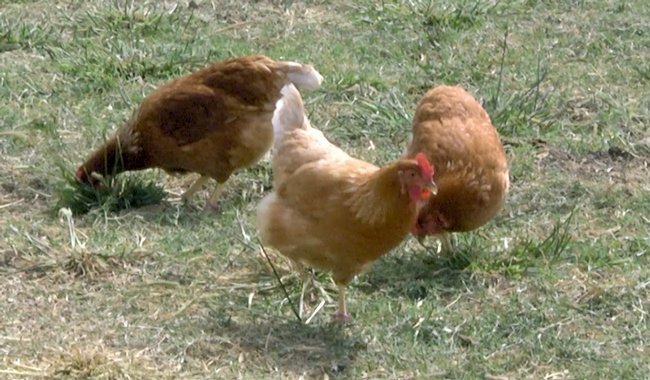 By law, organic and cage-free production must give birds access to the outdoors. While they are outdoors, poultry are at a higher risk of exposure to diseases carried by wild birds.

Sacramento, Calif., (March 2, 2018) – Circles on the California Waterfowl Tracker map shows where waterfowl are feeding and roosting. Red indicates a high density of birds, orange is medium density and yellow is low density. 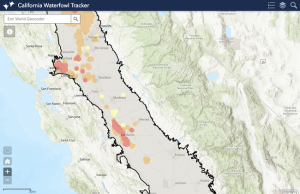 While not all waterfowl carry avian influenza, the migratory birds are the primary reservoir of the virus that kills chickens, turkeys and other birds and can take an economic toll on the poultry industry. During an outbreak of a highly pathogenic strain of avian influenza in 2014-15, nearly 50 million birds had to be killed to contain the disease in the United States.

“Avian influenza is such a devastating disease, in an abundance of caution, we want to limit any interaction between waterfowl and domestic poultry,” said Maurice Pitesky, UC Cooperative Extension poultry specialist.

The California Waterfowl Tracker has been developed by Pitesky at the School of Veterinary Medicine at UC Davis, the University of Delaware, U.S. Geological Survey and UC Agriculture and Natural Resources to show where waterfowl are.

From September through March, geese, ducks and other waterfowl migrate by the millions via the Pacific Flyway and winter in California wetlands, rice and corn fields. At the height of migration, the Central Valley is home to 3 million waterfowl.

The Central Valley is also home to the majority of the state’s commercial egg-laying hens, broiler chickens and turkey flocks.

Using the web app to understand when and where waterfowl are feeding and roosting, poultry farm managers and other stakeholders will be able to consider waterfowl in their decision making. They may decide to place pasture-raised poultry in a region of the state that has less wetlands, such as Fresno. If a large number of Canada geese take up residence nearby, poultry owners may decide to move their domestic birds indoors to reduce their exposure until the migrating waterfowl move on.

“The model doesn’t tell us whether waterfowl are carrying avian influenza, but it helps poultry producers and regulators understand where those interfaces could happen,” Pitesky said.

Additional waterfowl habitat and next-generation radar analysis of waterfowl are integrated into the web app. Users can search one or more addresses to anticipate their farms’ interaction with waterfowl. Based on the proximity of waterfowl and wild bird monitoring information from the U.S. Fish and Wildlife Service, poultry owners can make biosecurity decisions.

“While the current version of the website is designed for California, the long-term goal is to develop and expand this system for the continental U.S. to promote health and safety of poultry flocks nationally,” Pitesky said.

To use the California Waterfowl Tracker, visit the UC Cooperative Extension Poultry website http://ucanr.edu/sites/poultry. A video of Pitesky demonstrating how to use the web app can be viewed at https://youtu.be/EOO0Q_ggZ9I.

Poultry producers who would like to be notified by UC Cooperative Extension if there is an avian influenza outbreak in their area can sign up on the California Poultry Census page at http://ucanr.edu/sites/poultry/California_Poultry_Census.