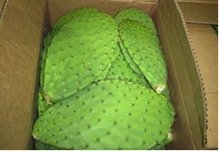 “Many Californians eat cactus as part of their diet, but the pesticide levels we have found at some specific locations are concerning,” said Brian Leahy, DPR director. “We are not aware of any illnesses that have been reported to date. But we suggest that anyone who bought this product from these locations recently, return it to the place of purchase or dispose of it in the garbage.”

The contaminated cactus pads were offered for sale to consumers and wholesale customers between Jan. 23 and Jan. 29th at the following locations:

DPR immediately took action to remove the products it could locate from store shelves and distribution centers. The products have been quarantined or destroyed so that they do not pose a threat to consumers. However, DPR believes it is possible that some of the contaminated cactus may have been sold to other stores in California, Nevada and Oregon. The tainted produce was packaged with the brand names “Mexpogroup Fresh Produce” or “Aramburo” or “Los Tres Huastecos”.

Washing or peeling the cactus prior is not effective and people should not try to salvage any of this contaminated produce. CDPH and CDPR have alerted the U.S. Food and Drug Administration about the issue.

Consumers that observe these products being offered for sale are encouraged to report the activity to the CDPH toll free complaint line at (800) 495-3232.

Meals for Children from Low-Income Families Amid Coronavirus Outbreak

The U.S. Department of Agriculture (USDA) has approved a request from California to allow …