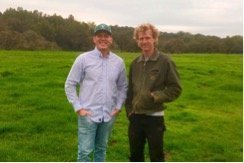 Santa Rosa, Calif., (February 14, 2018) – Byron Palmer and Nate Chisholm are the co-founders of Grounded Land and Livestock, working on what they describe as restoration grazing. The company was started in 2015, but the partners have been working together since 2011.

“People come to us with ranches they want managed in a certain way either ecologically minded or sustainably,” said Palmer. “On one end, we manage these ranches ecologically, improving their natural capital. On the other end we provide custom care for organic dairy cattle and organic beef cattle.”

Palmer describes Grounded as a cattle care business where they are providing custom organic cattle for other producers. Palmer estimates about 98% of their cattle are organic; the cattle that aren’t organic are part of their grass-fed beef program.

“We work to provide organic cattle care for people, and we partner with a non-profit to do economical land management with those cattle. We’re improving the cattle’s condition as well as the land at the same time.”

Grounded has a very strong focus on animal performance and health, and Palmer stresses that they never sacrifice that to improve the condition of the land. The balance between the two is very important to the business’ mission and is at the core of what they do.

To achieve both goals of animal performance and health and improving the land, Grounded focuses on managing the density of the animals as well as the recovery of the grass and the stocking rate of the animals.

When Palmer and Chisholm get a ranch to graze, they start by improving the internal fencing infrastructure using electric fence.

Grounded spends a lot of time assessing the quality and quantity of the land to determine how to most effectively run their cattle. By keeping their stocking rate at 80%, Palmer said that in a bad year they’ll have a drought reserve but in a good year they’ll have a lot of grass they can graze the next year.

Grounded and the Sonoma Mountain Institute hire a third party biologist to do plant counts and vegetation monitoring. Over four years, they’ve seen over a 100% overall increase in the number of species on their grazed lands but a decrease in invasive species such as thistle.

Grounded provides organic care for short bred and young heifers, and Palmer said producers often spend a lot money on feeding those heifers in their own operations, which has a significant impact on their bottom line. Some operations, Palmer said, don’t know what it costs them per day to take care of the heifers because they have so many different things to track.

Grounded specializes in the ability to provide care for less than what the farmer is spending as well as helping achieve their required pasture days and scale their operation.

“One of the unique things is we’re able to help people save money,” said Palmer. “We’ve run the numbers, looked into a lot of studies and talked to a lot of dairy nutritionists. It’s the one thing we specialize in, and we’re able to save operations up to 40% on their daily feed cost.”

Palmer said they appreciate being able to do business with local operations where there is a long heritage of agriculture in Sonoma and Marin counties.

“We think agriculture in all forms here is very important to the heritage of our community,” said Palmer. “We appreciate being able to be part of the communal fabric.”