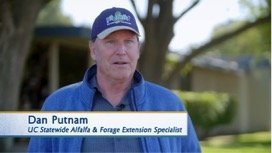 UC Cooperative Extension alfalfa specialist Dan Putnam wrote the drought tip ‘Drought Strategies for Alfalfa,’ on which the first video in the series is based. The video is on the UCTV Sustainable California channel, http://www.uctv.tv/sustainable-cal/.

Oakland, Calif., (February 8, 2018) – Because periodic droughts will always be a part of life in California, the UC California Institute for Water Resources (CIWR) produced a series of videos to maintain drought awareness and planning, even in years when water is more abundant.

The first of the three videos premieres Feb. 2 on the UCTV Sustainable California channel. Subsequent videos will be launched March 2 and April 6. View the trailer here.

The videos are inspired by a collection of 19 drought tips produced by CIWR in collaboration with UC Agriculture and Natural Resources researchers during the drought of 2010-16. The tips cover a broad spectrum of California crops, from alfalfa to walnuts. Topics also include salt management, use of graywater in urban landscapes, and the use of shallow groundwater for crop production. Three topics – alfalfa, almonds and citrus – are featured in the three-episode CIWR video series.

The drought tips collection and the drought tip videos were sponsored by the California Department of Water Resources. Following is the schedule for the video releases:

The CIWR drought tip series opens with Cannon Michael of Bowles Farming in Los Banos. The alfalfa grower works with UCCE specialist Dan Putnam. “There’s a lot of misunderstanding about alfalfa as a crop,” Michael said. “It does take water to grow it, as with anything, but you get multiple harvests of it every year.”

The second episode features almond producer Raj of Meena farms. He works with David Doll, UCCE advisor in Merced County. “One positive of this drought,” Meena said, “is that it has forced us all to be more efficient in how we use our water.”

The series finale features Lisa Brenneis of Churchill-Brenneis Orchard in the Ojai Valley of Ventura County. She worked with UCCE advisor Ben Faber to install a new water-efficient irrigation system. “Irrigation is the only job we really have to do,” Brenneis said, “and we have to get it as right as we can.”

For a complete list of drought tips, see http://ucanr.edu/drought-tips.