Sunday , 27 November 2022
Home News Education Creating the Farm and Farmworkers of the Future 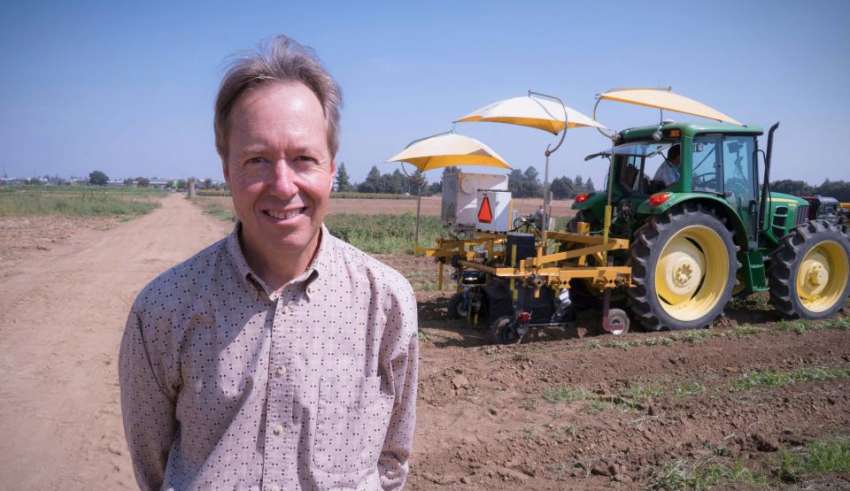 Davis, Calif., (January 25, 2018) – MORNING, 2047: WORK IS WELL UNDER WAY as day breaks on this farm in California’s Central Valley. A robotic tractor drives along rows of tomato plants, with a snip-snip-snip as weeds are cut away. A drone hovers over a field, looking for signs of disease. In the feedlot, sensors show which cattle are thriving and which are eating less – an early sign of illness.

From her office, the farm’s manager checks data flowing in on crops and livestock, what is being done and what needs attention. Across the farm, skilled workers tend to machines as well as to plants and animals.

Thanks to technology, this farm of the future produces more food, measured by inputs of land, labor, energy or materials than ever before and does so with less water and less impact on the environment and climate. And it also provides skilled careers for a new generation of farmworkers.

That’s the vision behind the Smart Farm Initiative at the University of California, Davis, one of the “Big Ideas” that the campus hopes will capture the attention of collaborators, donors and supporters.

“Smart Farm is about addressing the grand challenges in agriculture, using technology to increase production of food and renewable energy in the face of a changing climate,” said David Slaughter, professor of biological and agricultural engineering at UC Davis, who is leading the initiative. “What will a farm look like in 50 or 100 years? We have to address population growth, climate change and labor issues, and that has brought a lot of interest in technology.”

Slaughter is working to attract funding that will move Smart Farm from a collection of ideas and programs to an integrated initiative. He hopes to establish a physical presence for the initiative on campus west of Highway 113, with labs and workshops, experimental fields, educational space and a “droneport” for working with unmanned aerial vehicles. Other items on the wish list include new facilities for plant sciences and a “vertical farming” facility for experimenting with ways to grow crops in very limited space. New funding from private philanthropy, foundations or government grants could support researchers and students, including one or more endowed professorships.

“What will a farm look like in 50 or 100 years? We have to address population growth, climate change and labor issues, and that has brought a lot of interest in technology.”

By bringing together a diverse group of researchers, Slaughter hopes Smart Farm will accelerate the development of agricultural technologies such as robotics, plant science and animal care. At the same time, Slaughter and colleagues want to create a new generation of high-tech farmworkers while the current workforce transitions to jobs less dependent on hard manual labor.

“David’s approach is refreshing, because he is considering how the workers and the machines work together,” said Professor Adela de la Torre, vice chancellor for Student Affairs at UC Davis, who studies health and development in Latino and Chicano communities.

Some of those robots can already been seen out in the fields at UC Davis. For example, with support from the  US Department of Agriculture, Slaughter’s team has built an automated cultivator to replace weeding by hand. Towed behind a tractor, the machine identifies weeds in a row of crop plants and cuts them out of the soil.

The cultivator can distinguish crops from weeds because the crop seeds are coated with the fluorescent dye that transfers to the young plant as it shoots and grows. The dye gradually wears away, but there is enough on younger plants to enable the cultivator to pick them out and snip out the non-glowing weeds.

Another robot in field trials at UC Davis is a box on rails with a telescopic neck armed with cameras. The robot zips through a stand of sorghum taking pictures and collecting data on the plants and how much light they capture. The data goes back to a plant breeder who can use it to make new selections for the next round of breeding crosses.

“Farmers will have knowledge right down to the level of individual plants,” Slaughter said.

Plants have some obvious advantages for robotic management: They don’t move, and they aren’t going to, say, kick over a robot or try to eat it. But there’s still plenty of scope for new technology in raising livestock.

“What we see are opportunities for technology to amplify care,” said Cassandra Tucker, professor of animal science. Tucker specializes in the care of beef and dairy cattle and she sees opportunities to use sensors and information technology to better manage large herds and individual animals.

In production animals, she said, the first sign of ill-health is when an animal’s appetite drops off.

“If we can use sensors on individual animals to monitor food intake and rumination, we could see if an animal is getting sick days before we see other clinical signs,” she said.

In California, beef cattle begin their lives on grass and then fatten on feedlots. The feedlot system brings cattle to market faster, produces less greenhouse gas emissions and uses land more efficiently. But animals can also develop health problems with the change in diet when they come to feedlots. Having more information about individual animals would allow ranchers to optimize their systems based around animal welfare, Tucker said.

Poultry specialist Maja Makagon is using new technology as a tool to understand bird behavior, which could lead to better animal welfare and productivity.

“With poultry, we have not had the technology to look at individual birds, so we have been limited to studying flocks,” she said. “A lot of this data is hard to get at without technology.”

Makagon, for example, is using sensors on individual hens to record when they bump their keelbone (breastbone) against something. Keelbone damage is a significant problem that can affect egg production.

The key to this kind of “smart farming” is making all this information available in ways that are accessible and useful to farmers and workers, Tucker said.

“You need to deliver information to users in some useful way,” she said.

Robots in the fields and sensors in the barn might be attention-grabbing, but there could be a downside for farmworkers. In the past, introducing new technology has meant lost jobs and displaced communities.

In the mid-1960s, for example, UC Davis developed both the mechanized tomato harvester and tomato varieties suited to mechanical harvesting. Mechanization was prompted partly by the end of the “Bracero” program that bought guest workers from Mexico, and also came at a time when the United Farmworkers Union was trying to organize workers and bargain for better pay and conditions.

“Much of the approach of agricultural colleges has been to consider labor as an input of production,” de la Torre said. “But that labor input is a human being. If you only think of technology in terms of production, you don’t consider what it means for workers.”

“The big plus about the Smart Farm approach is that there can be intentionality in how we introduce technology,” de la Torre said. “We can optimize it for both farmers and workers.”

“We’re thinking of a big bold new perspective on how agricultural work is done,” said Mary Lou de Leon Siantz, professor of nursing and director of UC Davis’ CAMPOS program, which promotes opportunities for female and minority scholars in STEM fields. “The next generation of ag workers will be scientists and engineers and we need to start preparing students for that kind of work.”

“People don’t choose it as a career, they do it for survival,” Slaughter said.

Ray Rodriguez, a professor in the UC Davis College of Biological Sciences, has lived that experience. From the age of six Rodriguez experienced picking cotton, grapes, cantaloupes and tomatoes with his family in the Central Valley.

“You had a bag called a choke-sack that went over the head and shoulder, 50 pounds for the kids, 100 pounds for women, 150-pound sacks for the men. My dad would compete with the other men to see how much they could pick in a day, 300, 400 or 500 pounds,” Rodriguez said.

His last farm work was in 1965, when he picked grapes to raise tuition to attend Fresno City College.

“And I said I’m never doing this again. It’s nothing you want to expose people to unless you have to.”

From Fresno City College, Rodriguez transferred to CSU Fresno for his bachelor’s degree and UC Santa Cruz for his Ph.D. in genetics. He can look back on a career of research and teaching in plant genetics and molecular biology, biochemistry, nutrition and genomics. In 2010, he co-founded the Global HealthShare Initiative, which aims to speed commercialization of low-cost, effective health care solutions in developing countries.

Now Rodriguez and de Leon Siantz are putting together education and training proposals aimed at transforming farm work into a high-tech, high-skills occupation.

Tomorrow’s farmworkers could spend their time repairing machinery, analyzing data or debugging code from a robot. Tasks like those are going to need a wide range of skills and training, from certificate programs to graduate degrees.

“Without a transformation of the farm labor workforce, we are going to see massive displacement of farmworkers and their families,” Rodriguez said. “We have to make this a win-win for farmers, workers, their children as well as for consumers.”

Rodriguez and de Leon Siantz foresee a pipeline that includes middle and high schools, community colleges and universities that provides training for different levels of ability and attainment.

De Leon Siantz has studied the successes and problems of farmworkers and their children in the Central Valley: What keeps the kids in school, what makes them drop out. Creating a new agriculture workforce means engaging with the community, she said.

“We need to reach parents and kids, and help them visualize how their big dreams can be implemented,” de Leon Siantz said.

De Leon Siantz hopes to partner with the national 4-H organization to develop new programs for K12 schools – and which connect to a pipeline of community college, extension, undergraduate and graduate programs that can work for students at every level of ability.

“We have to think in broad ways about working with communities to make broad changes,” de la Torre said. “These communities are very aware of their self-interest, and they are aware when a program is not of benefit to them. If you meaningfully include people in the discussion, you will be far more successful.”

With a long track record in agricultural innovation, UC Davis is naturally well-positioned to invent the future of farming, from crop improvement to robotics. But more significantly, the campus culture of collaboration and cross-disciplinary work can bring a diverse group of people – biologists, engineers, educators, sociologists – to make a transformational shift in agriculture that benefits industry, consumers and communities.

The future of farm work is not about picking but about managing technology. Through the Smart Farm Initiative, Slaughter and colleagues hope not only to invent the technology, but develop the training and career paths that will open up new opportunities in agriculture.

“What better place to train them than UC Davis?” Slaughter said.