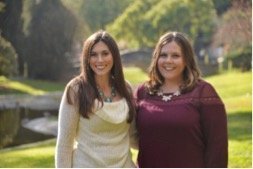 Alina and Suzanne Amaral grew up in Sonoma and were very involved in the agricultural community. After graduating with a doctorate degree and teaching credential, the sisters have moved back to Sonoma County to start their professional careers as a veterinarian and an ag teacher. Photo by Rachel LaFranchi.

Santa Rosa, Calif., (January 9, 2018) – Suzanne and Alina Amaral describe themselves as polar opposites. But the sisters from Sonoma have a lot in common: both are successful, driven young women who have recently returned to Sonoma County to start their professional careers.

Alina, 27, started her career as a veterinarian at Arroyo Veterinary Hospital in her hometown of Sonoma in August. Alina has always been passionate about animals, joining 4-H when she was five and following that later with FFA. Growing up, she showed everything from beef, sheep and swine to chickens, rabbits and dairy cattle.

Alina attended Sonoma Valley High School, and continued her education at Cal Poly, San Luis Obispo where she received a degree in Animal Science. She took a year off to work as a veterinary technician to get more experience with small animals. She went on to graduate from Western University as a Doctor of Veterinary Medicine in May.

Alina describes a typical day at Arroyo Veterinary Hospital, a companion animal practice, as not being very typical at all. She said work ranges from wellness and preventative care for pets to surgeries and internal medicine cases. In addition to that, the hospital does a lot of x-rays, ultrasounds and dental care.

Alina has a lot of plans for her future as a veterinarian, but said she feels it’s important for her just coming out of school to focus on the medicine.

“Ideally, what I’d like to do is a mixed animal practice, but unfortunately you don’t see that much in Sonoma County,” said Alina. “I’d like to practice food animal medicine, mostly cattle, but I’m open to some small ruminants and equine. There are also a lot of the companion animal aspects that I like; I enjoy the medicine and surgeries. Ideally it’d be a practice that has both large and small animals. Maybe five years down the road you’ll see me at that practice. Maybe owning a practice too, that’s a goal.”

Suzanne, 23, followed in much of her sister’s educational footsteps. After graduating from Sonoma Valley High, she went on to attend Cal Poly, San Luis Obispo where she received her degree in Ag Science with an Animal Science concentration. After graduating in 2016, Suzanne stayed another year in their graduate program and got her teaching credential in agriculture which she finished in June of this year.

She student taught last year at St. Helena High School and said she had a great experience. This year, she took a full time teaching position at Elsie Allen High School in Santa Rosa and just finished her first semester teaching. This year the courses she’s teaching include agri-science, landscape design, veterinary science and intro to ag mechanics.

“What I love about my job is that it’s just different every day and I’m not always in the classroom,” said Suzanne. “I could be out in the greenhouse or at the school farm or in the ag mechanics shop. Just getting the chance to help all these kids and show them the things I’m passionate about and leading them to those things they’re passionate about is always a really cool experience.”
Like her sister, Suzanne joined 4-H when she was five and continued to be actively involved until she aged out of the program, and during her time in the program she showed almost every species of animal and entered still exhibits at the fairs. In 4-H, she served as a junior and teen leader for her club’s beef and poultry projects. In addition to 4-H, Suzanne ran for dairy princess and served as the District Three Dairy Princess for 2012-2013.

Unlike Alina who was in FFA during her entire time in high school, Suzanne didn’t join the program until her junior year. She was on an AP and honors track and had no room in her school schedule. When a space finally freed up and she joined her junior year, she continued to focus on 4-H.

It was during her senior year when she separated her shoulder and couldn’t play volleyball, that she has time to take a leadership role in FFA as a chapter officer. Once joining the officer team, she participated in every competition and activity she could and said she ended up doing very well in FFA.

“At state conference that year, I ended up falling in love with the organization and that’s when I decided I wanted to be an ag teacher,” said Suzanne. “I was kicking myself in the butt for not joining FFA sooner.”

Suzanne said her passion for Sonoma County agriculture originates from all the opportunities and experiences she was afforded growing up because of it.

“When I think about every memory I have growing up, it has something to do with Sonoma County agriculture. Whether that was showing at the local fairs or being dairy princess and getting to present in the different classrooms or traveling back to Kentucky to get my American degree, my best memories are centered around agriculture that all stemmed from Sonoma County.”

Alina added that the mentors and people they had to look up to in the agriculture industry greatly contributed to their passion for local agriculture. From the older 4-H and FFA members who served as their role models to the supportive farmers and ranchers in their area, they said they’ve built so many connections that it’s nice to be able to come back and help the people who helped them.

The sisters both agree that the same people who helped them growing up are still helping them as they start their professional careers. They said they can count on those people and it’s nice to have a sense of community that’s so strong in Sonoma County.

Similarly, they said this support was one of the things that made them so successful. From the support of their parents to the role models and mentors they had growing up, it was the people in their lives that pushed their driven personalities to become successful.

The sisters also talked about how community support in the form of scholarships helped them through school. Alina said eight years of school was a financial burden and scholarships through community organizations such as Farm Bureau helped support their education efforts. In addition to the obvious financial assistance, Alina said the scholarships provided them real life experience and it also put them in a position to volunteer with Farm Bureau and become more connected in the community.

Both Alina and Suzanne agree that they’re driven and goal-oriented people, and they agree on two of the three things they would list as most important in their life: people and their careers. From friends and family to community support, they both know they wouldn’t be where they are without the people in their lives. And they also both agree they work too much and that their jobs are very important to who they are. The third item they come up with varies: Suzanne feels that setting and achieving goals is very important to her while Alina lists animals, something her career centers around.

In addition to their full time jobs and involvement in the community, the Amarals also raise their own Angus cows. They have seven head, a few mother cows and babies and hope to sell a bull in next year’s Cal Poly Bull Test.

When asked about their relationship as sisters, both girls just look at each other and laugh. Growing up, they said they fought all the time. It wasn’t until they were 12 and 16 years old that their relationship began to change. Suzanne credits the change to a car accident they were both in although Alina feels they may have reached an age where they just got along better.
“Things just shifted and we’ve been really close ever since,” said Suzanne. “We totally bicker like typical sisters, but we get along really well now.”