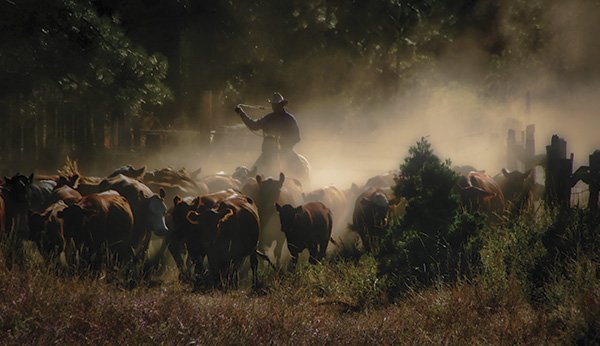 Grand Prize: Emela Brown McLaren - San Joaquin County An early-morning cattle roundup at the ranch of Dan and Andrea Erickson near Yosemite drew Emela Brown McLaren’s interest; she and a friend were there for a workshop. The ranch, founded by Dan Erickson’s great-great-grandfather, once fed the builders of Hetch Hetchy Dam. McLaren said the ranch is still run much the same way it was in the old days. “It’s a real honor to live in the San Joaquin Valley with all the farms and the cattle ranches, and the different things going on,” she said.

Sacramento, Calif., (January 5, 2018) – Capturing the drama of an early-morning cattle roundup near Yosemite, an amateur photographer from San Joaquin County took home the top prize in the 36th annual California Farm Bureau Federation Photo Contest. Emela Brown McLaren of Manteca earned the $1,000 Grand Prize, and said it’s “a real honor” to live in proximity to so many farms and ranches.

The 2017 CFBF Photo Contest attracted hundreds of images from amateur photographers who are members of county Farm Bureaus or supporters of the California Bountiful Foundation.

Andrew Lincoln of Napa garnered First Place and $500 for his photo of employees at a hillside vineyard, while Second Place and $250 went to Solvang resident Henry Schulte, who submitted a photo of a Madera County barn painted with the American flag. Kellie Neufeld of Exeter won Third Place and $100 for capturing a humorous moment between her 9-year-old son and his muddy 4-H hog.

Six photos earned Honorable Mentions and $50 each, submitted by Amy Blagg of Lodi, Holly Schaad of Dunnigan, Andrea Traphagan of Ravendale and Thomas Gannon of Atwater, plus an additional image each from Lincoln and Neufeld.

In the Budding Artists category for photographers aged 13 and younger, Nathan Blagg of Lodi, the 8-year-old son of Honorable Mention winner Amy Blagg, claimed First Place and $250 for his portrait of a pig peeking over a fence. A view of a calf peering from underneath its mother earned the Second Place prize of $100 for 11-year-old Holyn Sylvester of San Luis Obispo. Both prizes were presented by the California Foundation for Agriculture in the Classroom.

All 12 prize-winning photos were published this week in the weekly California Farm Bureau newspaper, Ag Alert®, as well as the organization’s bimonthly magazine, California Bountiful®, and will appear on the organization’s websites—www.cfbf.com, www.agalert.com and www.californiabountiful.com—and social media pages.