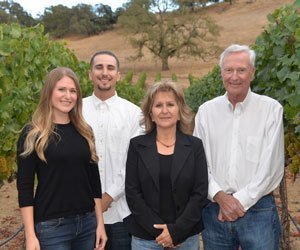 Santa Rosa, Calif., (October 17, 2017) – Twin brothers Henry and John Himbauch bought two 415 acre parcels on Petaluma Hill Road in August of 1848. The brothers had previously owned 83 acres in Two Rock, but when the opportunity arose to purchase the pieces of the Cotati Ranch, the family knew that was where they wanted to live.

At one point, the Himebauchs owned seven ranches, using the Petaluma Hill Road location as their headquarters.

Nearly 160 years later, Henry Himbauch’s great-great-grandson, Henry James Anderson, and his family still operate approximately 300 acres of the original parcel. John sold his piece to the neighboring Brians family who still own that property and have also kept it in the family for more than 100 years.

The ranch is located directly across from Sonoma State University, and the family said they enjoy hearing live music from the Green Music Center. At one time, the land Sonoma State is built on also belonged to Anderson family.

The family’s effort to maintain the ranch can be seen by the area around them. With such a close proximity to Sonoma State, the land surrounding the University had continued to be developed into subdivisions.

Over the years, the family has raised many different commodities including chickens, winegrapes, beef and dairy cattle, sheep and hogs. At one point, the family had more than 5,000 egg producing chickens.

“They were very diversified because they had to be to have beef to eat, milk to drink and eggs to cook with,” said Anderson. “We had everything here. It was absolutely great and still is.”

Today, the family grows winegrapes and runs beef cattle. Their current herd is around 50 head of Beefmaster cattle. They have 15 acres of Chardonnay planted which they sell to Sonoma-Cutrer.

Anderson said “it’s all about the great people you’re related to.” The family is connected to all their neighbors and related to many of them. In addition to the Porters, Anderson is related many of the other long term farming families in the county and friends with a considerable amount more.

For Anderson, farming has always been his second job. He spent most of his career transporting livestock, and considers himself one of the pioneering people to transport livestock by aircraft. But his two careers were not his only involvement in agriculture. In addition to running the ranch and moving livestock, Anderson received his FFA American Degree, showed sheep and judged fairs throughout the country.

His daughter Christy is attending Sonoma State where she is pursuing a degree in Economics as well as her MBA. Both Christy and her brother are committed to keeping the family business running and the ranch in the family for the next generation.

“Everything I have studied and everything I do is to handle the day to day operations and keep the ranch running,” said Christy.