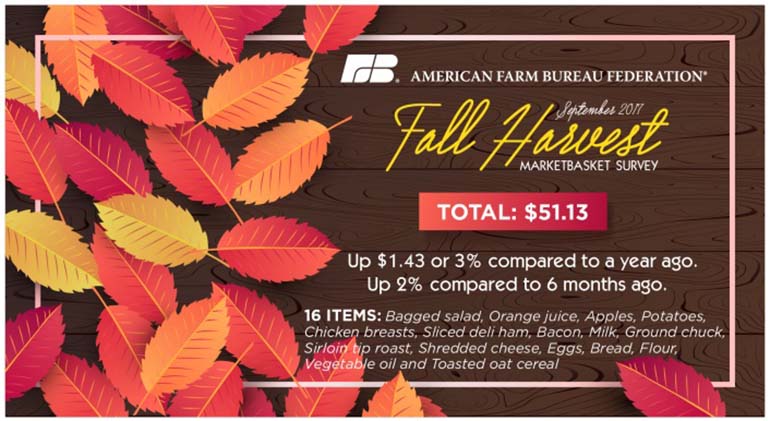 The informal survey shows the total cost of 16 food items that can be used to prepare one or more meals was $51.13, up $1.43, or about 3 percent, compared to a survey conducted a year ago. Of the 16 items surveyed, 12 increased and four decreased in average price.

“Bacon was up significantly because of the lower inventory and higher prices of pork bellies. We saw a rally in wholesale bacon prices this summer and fall which is being reflected at the retail level,” Newton said. “Bacon is a sexy food item in restaurants and everywhere else, creating an inventory decline and thus a price increase.”

The following items showed retail price increases from a year ago:

These items showed moderate retail price decreases compared to a year ago:

“Supply and demand for chicken breasts is tight, which is why retail prices are higher,” Newton said. In addition, he said the price increase for orange juice is related to the lower supply of oranges, which could worsen due to the impact of Hurricane Harvey.

Consumers saw a slight decline in egg prices. “Egg supplies are fully rebuilt from what we saw a few years ago and we are seeing egg prices continue to come back to where they were prior to the bird flu a few years ago,” Newton said.

For many food items, the year-to-year direction of the marketbasket survey tracks with the federal government’s Consumer Price Index report for food at home. As retail grocery prices have increased gradually over time, the share of the average food dollar that America’s farm and ranch families receive has dropped.

“Through the mid-1970s, farmers received about one-third of consumer retail food expenditures for food eaten at home and away from home, on average. Since then, that figure has decreased steadily and is now about 15.6 percent, according to the Agriculture Department’s revised Food Dollar Series,” Newton said.

Using the “food at home and away from home” percentage across-the-board, the farmer’s share of this $51.13 marketbasket would be approximately $8.00.

According to USDA, Americans spend just under 10 percent of their disposable annual income on food, the lowest average of any country in the world. A total of 81 shoppers in 25 states participated in the latest survey, conducted in September.